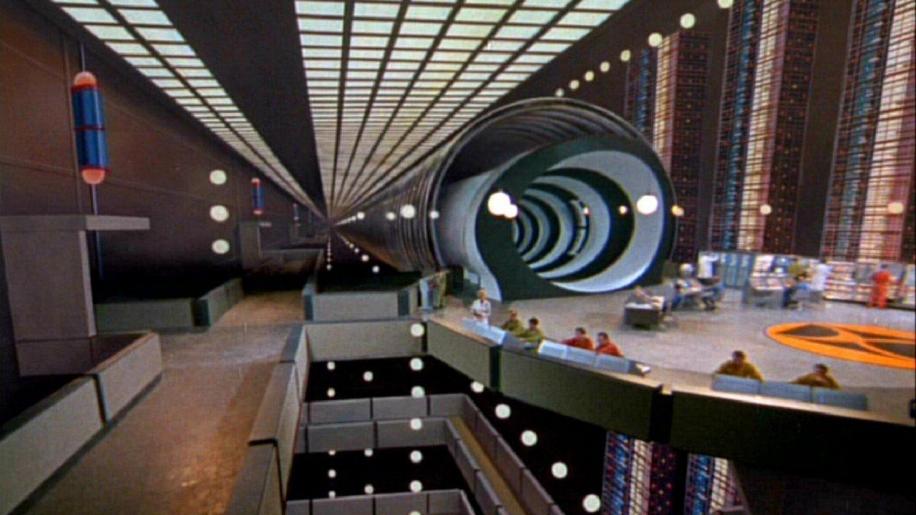 Well, whatever complaints I have about the show itself, the video transfer certainly comes up the goods. The full screen 1.33:1 ratio of its original broadcast is faithfully reproduced, but the first thing that you'll notice are the bold colours, that are rich, vibrant and deep. Right across entire selection of episodes, the fidelity is reassuringly accurate and consistent. Allen loved to make colourful shows and the picture here is quite splendid and lively, and much more reliable than the Lost In Space DVDs which often appear tired and washed-out. In contrast, The Time Tunnel is positively radiant, the restorers having done an impeccable job of scrubbing it up. There is some print damage left, but it is small and never distracting - merely the odd fleck and speckle here and there and the occasional wobble or judder during scene changes. Grain is apparent too, but this is only slight and actually lends a nice filmic quality to the show.

Detail is equally impressive with many scenes retaining a sharpness that is quite surprising for a series of this vintage. In fact, the visual letdown that is annoying is the quality of the footage culled from other movies that are jarring interruptions in each episode and of varying film stock that sticks out like a sore thumb. Black levels are full and strong, offering nice depth to the image. The small amount of edge enhancement shouldn't pose a problem either. I saw this on a 44 inch screen, and I have to say that it looked terrific. The original mono track is perfectly acceptable, but wholly without distinction. It effectively energises the onscreen action with plenty of musical flourishes and a decent presentation of the limited sound effects. Some of the battles and disaster scenes lifted from other films sound muted and dry, however, with gunshots, screams and explosions lacking the impact of the ones actually staged for the show. But dialogue is always clear and there is no damage to the track that I noticed. Although some effort has been made to find some material for the show, the results are pretty lame, I'm afraid.

Irwin Allen's Home Movies (67.48 mins) come with 16 titled sections or a Play All option. Although vaguely interesting in places, I found the whole thing very un-involving because there is no audio available for the entire duration of the feature. Now this is understandable given the nature of the material, but it would, perhaps, have been a good idea to provide some historical narration running over it. As it is, we are treated to lots of behind the scenes footage - rehearsals, cast and crew eating, some set-building and jungle antics - though the overwhelming majority of it is obviously from the pilot episode. Maybe Allen gave up wasting his own film on the show after that. Sorry to the fans, but it's a shame the studio didn't do the same.

The un-aired pilot episode (55.17 mins) is actually a longer version of the existing show. But this one is more enjoyable because at least it experiments with the paradox of time travel a little bit with an alternative, and lengthy, ending that sees Tony whisked back to the desert site of the project at a time before anyone there even knew him, rendering him a jibbering idiot in the eyes of those he would, at some point, work with. There's an idea here that the rest of the season would choose to ignore. Sadly, this whiff of cleverness is swiftly elbowed aside with the arrival of a massive superimposed dinosaur. No wait ... it's just an alligator with some rubber horns and spikes stuck on it. Right, back on track then, Mr. Allen.

The FX Camera Test (again with no audio) is just 1.49 mins of flashing lights going off down the time tunnel set. Erm ... utterly pointless.

Then we get the Stills Galleries. Here, we get images covering Concept Art, Production/Behind The Scenes, Merchandise, Storyboards and the Comic Book version. We see some artwork ripped off from Forbidden Planet, stills from the Pilot, some shots of the games, badges and soundtrack single and some storyboards from the start of the first episode. This whole presentation has been ruined by the fact that we are viewing these stills as though we are looking down the Time Tunnel itself - and, even then, from behind the usual idiots at the control desk. One even has his head in the way! Even the comic book, which was a nice idea to show page by page, is presented so small as to make it unreadable. So, what's the point, then?

Then we have a selection of TV and radio promotional spots, which play up the weekly action quota with excitable superlatives adorning each - “The breathtaking future!” etc. James Darren, in decidedly un-excitable mode, provides the voiceover for the three brief radio spots. Perhaps he was realising that the writing was on the wall. Afterall, T. J. Hooker was on the horizon, when he'd be starring alongside the rival show's own Captain Kirk

Basically, this is a very uninspiring set of extras. Well, I can't imagine that The Time Tunnel will win over any new fans. And I doubt that those who may have loved the show in their younger years will find much to restore their faith when they view it again. It's a terrible slice of un-imaginative hokum that hasn't aged well at all. Lacking all the things that made Irwin Allen's fantasies so unique and fondly remembered, it just bounces along with only its own monumental dumbness providing any entertainment.

The AV quality, however, is very good. But the extras are few and hampered by irrelevance or poor presentation. I'll stick with Lost In Space.