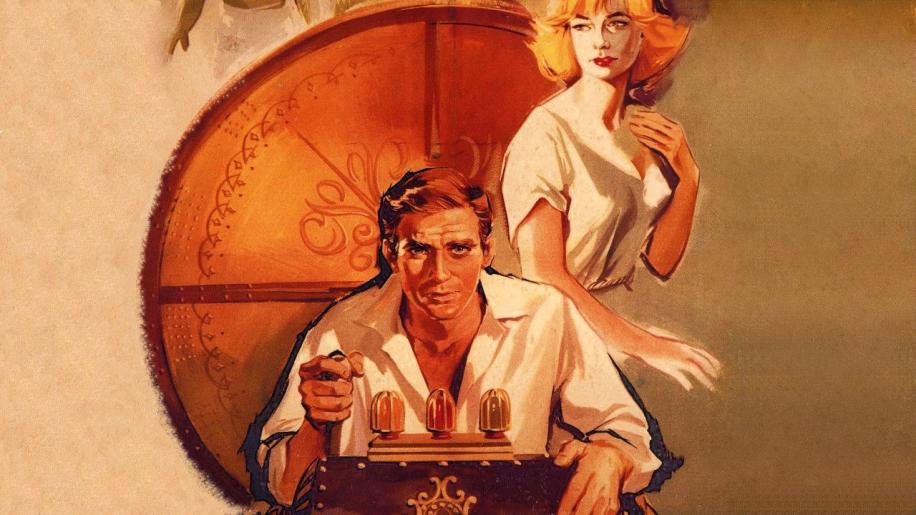 The Time Machine's anamorphic 1.85:1 image has a number of issues, I'm afraid. Whilst, for the most part, beautifully colourful, bright and warm - as any self-respecting post-WW II sci-fi opus should be - the picture is prone to many inconsistencies of detail and quality. Interiors are fine, as are close-ups - with great blacks to produce deep shadow and boost atmosphere. But once we see objects in the mid to background, definition is lost, clarity can be sacrificed and the ever-present edge enhancement seems to dominate. Some grand shots are dreadfully diminished by this - particularly the moment when George first enters the great banquet hall of the Eloi. Grain is evident throughout, giving the movie a slightly gauze-like appearance, and there are some elements of print damage. But this is made up of the occasional scene-change judder, pop and dot variety - and certainly not enough to worry about. Strangely, a lot of damage seems to appear during the strobe-effect that poor George undergoes when the time machine goes too fast, as though illuminated by the dazzling colours.

And, speaking of which, the colours are actually pretty decent. Again, the interiors seem to boast the most striking use of the spectrum, with a solidity that is nice and bold. Exteriors, whilst still retaining an acceptable level of brightness and warmth, can appear a little washed-out at times, too. But I'm sure this is more to do the condition of the original film stock and not merely a defect of the transfer. For instance, compare the rich reds of the lava flow that engulfs George's future hometown and the plush velvet of the time machine with the often muted hues of the Eloi's gowns. However, the Morlocks have an appropriately sickly blue look and their glowing yellow eyes are tremendously bright and sharp. Likewise, the flames that play an important part of the fiery climax are bright and vivid, and the surprising display of Morlock-gore is realistically rendered. The original soundtrack has been remixed into a DD 5.1 track that is nowhere near as bad as I might have feared. In fact, I quite like the new mix. Sounding brighter, wider and more engaging than it must have done upon its original release, The Time Machine benefits from a clever stereo spread across the front that aids the realism and ambience of George's house, with his guests' voices emanating left and right and, later on, the bubbling of the river as Weena struggles against its flow. In fact, the rears are frequently brought into play, too, with London through the ages - the New Year's Eve revellers going past in their coach, the tooting horn of the automobile that greets George in his first future stop, and the panicked voices of the people rushing into the shelters during his second stop - all sounding quite nicely steered and involving, without coming across as the bogus displaced effects that they do on so many remixed older movies. One scene that proves this point of not meddling too unnecessarily is when George bangs the plates in the empty auditorium and shouts “Is anybody here?”, which the sound engineers could so easily have gone to town on. Instead, the echo is nicely reproduced without being at all exaggerated.

But this track is still nothing when compared to a more modern surround mix. Dialogue, for instance, is slightly subdued and Russell Garcia's score has a tendency to suddenly blare out without much consideration for the voices or effects that it is meant to enhance. Thankfully, though, when things go ballistic the atmosphere the track creates is very pleasantly immersive and well steered. Well, apart from the wacky original trailer (2.25 mins) that is narrated by a smugly enthusiastic Orson Wells, and a couple of text cards for Cast and Crew and a mention of the Academy Award it won in 1960, this R2 release has only the documentary, The Time Machine: A Journey Back to commend it in the extras department. Even the R1 had the score available on a 5.1 isolated track - but that seems to have come adrift on the disc's voyage across the Atlantic.

So, what of the documentary, then? Well, running for an agreeable 47.42 mins, the feature takes a decidedly sideways look at the film, in that it seems to concentrate primarily upon the time machine prop itself and the hit and miss fortunes that it has undergone since its creation. Introduced and narrated by Rod Taylor, with a nostalgically sickly-sweet tongue wedged firmly in his now much-chopsier cheek, we get to find out about its design, its construction and the fate that befell it after the film was released. Taylor, all the while, gushes like a sentimental loon. The ace up the doc's sleeve, however, is the rather bizarre little pseudo-sequel it incorporates, that details a final meeting between George and best friend David Filby on the eve of David going off to a war that George knows he will not return from. With both Rod Taylor and Alan Young returning to the roles, this is perhaps overly sentimental and really rather daft, the two aging actors attempting, via much shadow and crafty camera angles to portray themselves as they appeared in the film, delivering a very brief, but very touching epitaph to their tale. The pair obviously really enjoyed the revisit and the piece exudes warmth and terrific nostalgia. It may be tacky, but I like it. Their on-screen chemistry in the film is, without doubt, one of its advantages, and despite this, admittedly, quite pointless addendum to the story, it remains a delightful signing off.

As with so many of the films featured in the Retrofest, I can't help feeling that another, more comprehensive edition will one day come along. Only time will tell, eh? Get it? Only time will t ... oh never mind. Pal's The Time Machine is a true classic that takes me back in time whenever I view it. The colour and the imagery is bold and striking, the spirit of adventure wild and exuberant. In many ways it is a story as innocent as the apathetic Eloi, so literally afraid of the troubles of the times that it seeks nothing more than to whisk us away with it to a place where common-sense and love can conquer all evils. Well, who can argue with that sort of ideology?

The disc is a reasonable one, with a transfer that can be warm and inviting and sound that actually benefits from the subtle remixing it has been bestowed. The extras are unusual, though. But, perhaps in keeping with the attitude of the film's main character, they are aptly eccentric. Despite its rather obvious visual shortcomings, the little sequel incorporated into the documentary is actually a nice little addition to the fable. Unnecessary, yes ... but something for the fans, and that includes Rod Taylor and Alan Young who, like me, seem unable to let go of some of the glories of the past.