The Thing From Another World DVD Review 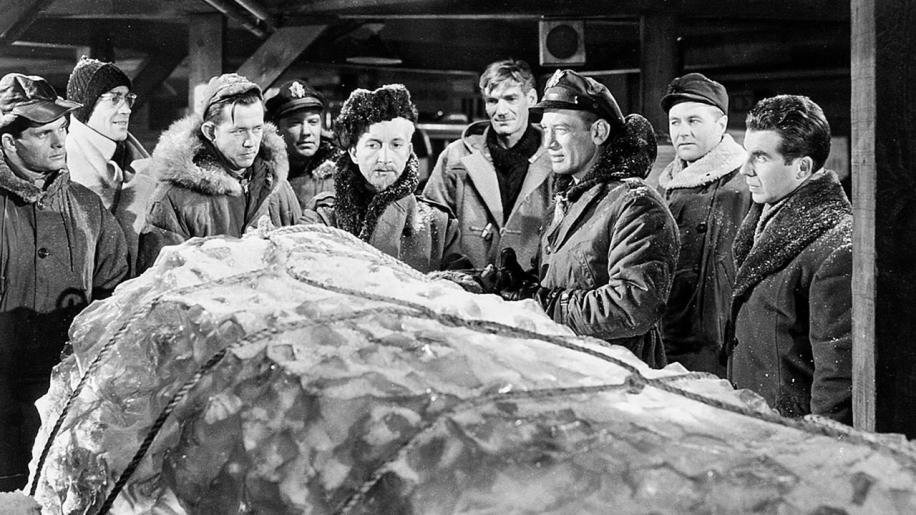 Well, obviously you can't set your sights too high for a film of this vintage. But, even so, the print that Warner has supplied on this release is still terribly blighted by damage. Some shots are stippled with scratches, flickers and grime on the lens, particularly views from air to ground, or vice-versa and most exterior scenes suffer from jerky edits and an overall grubbiness. However, the full screen 1.33:1 image is, for the most part, stable and offers up a surprisingly high level of detail - from the numerous buttons and switches in Hendry's cockpit, Tex's radio room or Carrington's lab to the wealth of objects and paraphernalia languishing in the background such as wall charts or scientific equipment. Faces are particularly well-etched, as are costumes and weapons. Check out the flashing Geiger counters that always look nice and bright.

Whilst grain is evident, it is nowhere near as bad as you might have expected, giving the film a terrific cinematic feel - and besides, there's so much snow blowing about that you're hardly going to notice it anyway. Black levels are pretty good too - a great sense of depth is afforded the cramped interior of the plane and the room in which the Thing thaws out of his cage of ice. The many wide shots of the large number of characters never look jumbled or crowded with the image remaining well composed and robust. Compression problems are rarely to be seen, though edge enhancement will become quite glaring on larger screens.

Overall, this is still a pretty decent transfer, all things considered. But, I still feel that there is motive aplenty for a glorious restoration job to be bestowed upon it. There's not much that can be said about the Dolby Digital 1.0 mono track, in all honesty. The score warbles about a bit but dialogue is pretty clear and never muffled. There is actually precious little hiss or crackle, thankfully, and when the Thing roars it will still send shivers down your spine. Mind you, although I don't really like vintage movies that never had surround mixes receiving new multi-channel makeovers (they very rarely work, in my opinion) I wouldn't mind some effort being made here with, say, a stereo surround track to widen up the field and offer some simple steerage. The atmospheric winds rolling around the room and the dogs howling mournfully away would certainly add to the eerie ambience.

Still, until that day comes along, I'm quite content with this. Nothing apart from a rather cantankerous theatrical trailer (1.32 mins) that does little to really showcase the movie's highlights. It does, however, show a dreadful piece of overacting from William Self as the unfortunate Cpl. Barnes, in all its awful glory. There just has to be some material out there that could be added to a future release. A timeless classic. As an allegory of Cold War threat, it is merely perfunctory. But, as a suspenseful creature feature it is a shining example of a studio getting it right. A strong ensemble cast, witty dialogue and some trend-setting set-pieces firmly entrench The Thing From Another World as the ultimate alien invader. That John Carpenter's phenomenal remake came out in the same year as, and was unfortunately trounced by, another benign, and loveable visitor from the stars, is a direct parallel to the original going head to head with The Day The Earth Stood Still. Funny thing, Fate, isn't it? What goes around, comes around, eh?