A tale of murder, soup and happy dogs 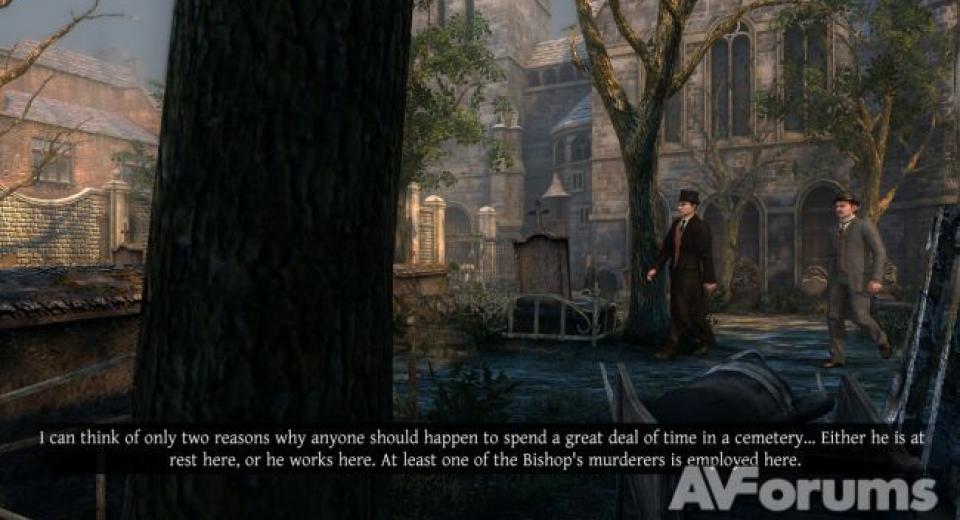 There’s a fine line to walk with any Sherlock Holmes videogame adaptation. After all, the fictional man himself is bestowed with a level of reasoning and intellect far beyond our own capabilities, and that’s before considering that he can also be a cold-hearted ass - a trait that might be unpleasant to roleplay as for long periods. Portraying those characteristics within the confines of mental challenges and dialogue aimed at mere mortals may well be a tough nut to crack for any aspiring developer (without overly relying on Watson as a straight analogue for audience intellect anyway), and so it’s no surprise to see most videogame adaptations of Holmes fall back on the sorts of basic adventuring and puzzle solving that we’re used to at this point. The Testament is no different in that regard.
The majority of this latest sleuth-fest is undertaken performing strictly traditional activities for the standards of the genre, with a couple of interesting gameplay mechanics thrown in to appease those of you in danger of item-management burnout. Whilst bumbling around your chosen scene you'll find suitable investigatory objects marked out by a magnifying glass (Testament can be played in either first or third person, with full character control or point-and-click styles), whilst a blue finger indicates something you can interact with in a strictly prescribed manner. The basic adventure gameplay loop therefore dictates that you investigate every environmental prompt for possible clues, combine a few items in your inventory and attempt to MacGyver your way through to a solution utilising every object that isn’t tied down to the background. The solutions to Testament's puzzles are almost universally logical and require little in the way of abstract second-guessing, but they can nevertheless be quite tough if you've not stretched your grey matter in a while. Reaching the end of an environmental set piece usually results in access to a Professor Layton-style single-screen puzzle, mathematical conundrum or a riddle of some type, and it's in those that the game starts to wear its formula a little thin. The majority of them are decently designed and engaging enough, but there are a notable quantity that may frustrate more than they do delight; such is their level of abstraction and obfuscation. Individual players will always find different activities hold a varying level of challenge of course, but a quick search online shows a few common bottlenecks within their ranks that might point to some questionable design decisions along the way.
Once you’re done with them however, each of those key moments provides an entry in your increasingly complex journal, and some of those act as clues in a meta-layer of puzzle solving that involves piecing together the probable actions of your primary suspects. Solving one of those ‘deduction boards’ is a particularly satisfying “eureka!” moment, leading to some nicely scripted revelations and the plot lurching forward to the next sequence. They are, unfortunately, sparingly used towards the latter of the game however, although a few other surprises lay in store for those diligent enough to make it through the 8-10 hours of gameplay on offer. Whilst the act of playing The Testament of Sherlock Holmes over that time period is best described as a decent enough adventure without too many high points, developer Frogwares has at least been chipping away at the licence for a while now, leading to a good level of polish and confident visuals, dialogue and storytelling. Holmes' and Watson’s tale engulfs them in the sort of mystery and grisly, gory plot twists that mark the series as something decidedly adult-oriented, whilst reams of slightly awkward explanatory dialogue are played with enthusiasm and a comedic stiff upper lip by the voice talent.
Indeed it’s probably the storyline and dialogue delivery that are its strongest points. From the off, the plot wanders into murderous mystery without so much as skipping a beat, with the discovery of a mutilated corpse in a church and a strange ink stain on a rug in the adjoining room. After inspecting the scene and discerning every little detail about the bloodied and gnawed remains (including picking up body parts; take heed those of a squeamish nature), Holmes and Watson embark on a tale of murder, double-crossings, suspected murder, newspaper treachery, poison, a death that’s most likely a murder, soup, mutilation whilst attempting murder, flappy-eared dogs and a touch of accidental death that might actually turn out to be a murder if you look closely enough. And look you will, because the other standout detail about The Testament of Sherlock Holmes is that it’s strikingly designed (on PC anyway). Whilst animation is at a sparse minimum, the depiction of Victorian London is nicely detailed and excellently atmospheric. Frogwares isn’t shy in getting into the tawdry visual details of some of its more comically downtrodden characters either, and the streets, graveyards, mill houses and circuses that make up the brunt of the adventure serve as a crisp and compelling backdrop. It’s not all universally amazing art, but each location is at the least packed full of lived-in grime and a love for getting to the heart of its city.

It turns out that the locale, atmosphere and settings were no small part of the Holmes’ legend to get right, as Arthur Conan Doyle’s books were always just as much about sparking the imagination through descriptive passages as they were about their protagonists (at least as remembered through my teenage eyes). The Testament of Sherlock Holmes might not live up to the very best in that regard, but it does make you want to sleuth your way through each of its grim streets and talk to its downtrodden denizens to see what comes next. The gameplay might not quite back up the art execution then, but there are far, far blander adventures to lose yourself in than this.