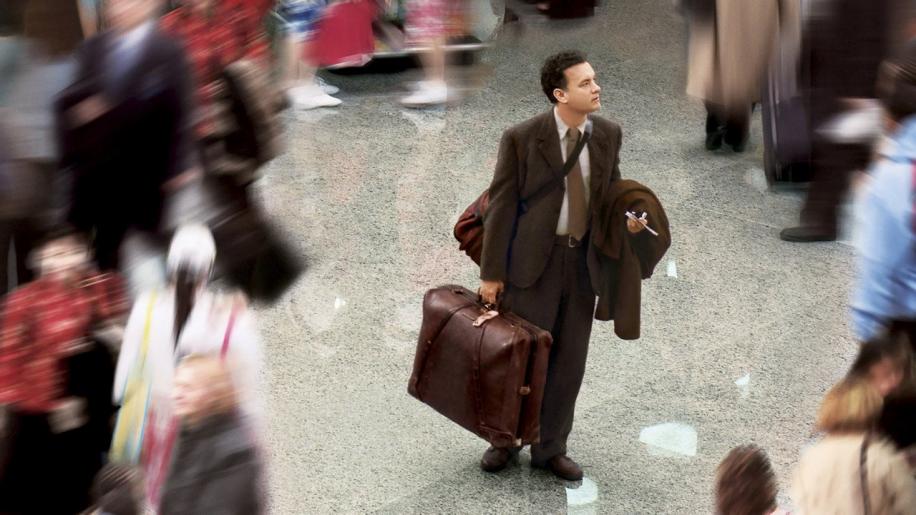 The Terminal is presented with a 1.85:1 aspect ratio anamorphically enhanced transfer that has a dreamy look to it. Occasionally this means that there is a little softness to the picture - a purposeful lack of focus to reflect the mood - but the detail somehow remains fairly good, with clarity throughout most of the movie. There is negligible edge enhancement and no real signs of digital artefacts. The colour scheme is remarkably broad considering the setting - almost entirely in an airport - and the colours are always represented well. Black levels are good, with solid, deep shadows and there is no grain clouding this picture. Overall it is a good, if not outstanding transfer. The Terminal certainly gets the deluxe treatment in terms of audio, with both a standard Dolby Digital 5.1 mix and a great DTS 5.1 track as well. They are very similar, with keen attention paid to the all-important dialogue that comes clearly and coherently from the frontal array, as well as a rousing score - something Spielberg is renowned for - emanating mainly from the rears. Obviously the DTS track does everything that the Dolby track does - only better - but similarly it suffers from the same problem: the material just does not warrant any significant bass. On the other hand, although you might not expect it, there is plenty of room for effects - a whole airport full of them - and these are always presented well, encompassing you in the atmosphere of the environment. These are two solid mixes that probably present the movie better than ever before. This release of the Terminal has a whole second disc of extras. First up there is a featurette entitled Booking the Flight: The Script, The Story. Running at eight minutes in length, it features interviews with Director Steven Spielberg talking about the amazing things you can find at an Airport. He explains the basic premise and discusses the original script that he picked up. The featurette has a little too much footage from the final movie, but also has some glimpses of behind the scenes action thrown in there. The screenwriters and producer offer a little more information into the characters - characters that they actually came across at an Airport - and this is quite a nice, slightly fluffy documentary.

Waiting for the Flight: Building the Terminal is a twelve-minute featurette with a great deal more behind the scenes footage showing the lengths they went to in creating the set for this production. With interviews once more with Spielberg and also the production designer he worked with on Minority Report, we get to see the evolution of the life size terminal and the miniature sets that they used to plan the real thing. Utilising an old airport hanger to create the set, it is truly amazing to see it all come together - the comparison shots of the terminal midway through the design and in its final stages are very revealing. Some of the more technical comparisons to a real Airport are slightly unnecessary, but it is nice to hear the intricate detail they wanted on the design.

Boarding: The People of the Terminal is split into three sections, with the ability to play all. First you get Tom Hanks is 'Vicktor', where they spend seven minutes looking at the Tom Hanks character, with interviews from Hanks himself talking about how he was hooked into the screenplay from the original concept. Spielberg discusses the imaginary land of Krakozhia that Viktor was supposed to have flown in form and we get a little behind the scenes footage thrown into the mix amidst another unnecessary amount of clips from the movie. They talk about the accent and the actions of the character and how Hanks threw a great deal of improvisation into the story, coming up with some hilarious ideas. The second section is entitled Catherine Zeta-Jones is 'Amelia' and runs at eight minutes in length, looking at Viktor's counterpart, the air hostess Amelia. We get Zeta-Jones in interview, talking about coming to Hollywood and securing this role midway through the Zorro production. Spielberg discusses her beauty and her part as a woman who has no luck in love, also taking a look at the relationship with Viktor's character. Finally Viktor's World offers a fifteen-minute, sometimes split-screen look at the world in which this character exists, basically summing up the interesting people that also populate it. Spielberg talks about Stanley Tucci's pseudo-villainous role, as a man who is basically just trying to do his security job well, and we even get Tucci himself offering a little bit of input. Although this part of the documentary concentrates mainly on his character, we also get a brief look at some of the others, including one of the Airport security guards, the baggage carrier, the passport control officer and the floor cleaner, all discussed by both Spielberg and the respective actors involved. This is quite a nice documentary and it is certainly great to see so many of the actors contribute something to it.

Take Off: Making the Terminal is a seventeen-minute documentary about the whole production. Spielberg, Hanks, Zeta-Jones et al. return to talk about the terminal itself and how filming the movie was quite a magical experience. By now some of the footage sampled from the final film is starting to get a little repetitive and annoying, but there are quite a few nice behind the scenes shot to keep you happy. I'm also not sure how much of the material here is all that new considering what has been covered already, but we do get to hear from a few new crew members talking about their roles in the production.

In Flight Service: The Music of the Terminal is a six-minute look at scoring the production, featuring Spielberg talking about what he wanted each section to sound like. John Williams, the composer, is seen in action with his orchestra, and heard in interview discussing how he brought the movie to life, trying to give a slightly ethnic cultural feel to this tale of a lost foreigner. Landing: Airport Stories runs at six minutes and features interviews with Zeta-Jones, Hanks and Spielberg, along with some of the rest of the crew, all discussing their own personal experiences in airports - some of which are quite funny. Finally we get a Photo Gallery with about fifty shots from the movie and on the set. It's a nice set of extras and, although there are optional subtitles, it is quite good that they did not burn any foreign subtitles into the featurettes. The Terminal is quite an enjoyable little movie that should appeal to fans of Spielberg, Hanks or this type of feel-good movie. It has a nice premise that has been expanded upon quite inventively. Here we get a lovely two-disc edition with a solid transfer and amazing sound, but slightly disappointing extras - merely because there is no sign of a commentary track. Still, it is worth bearing in mind that this is clearly the best edition available at the moment, which makes it a tempting impulse buy.