Everything about the film is extravagant 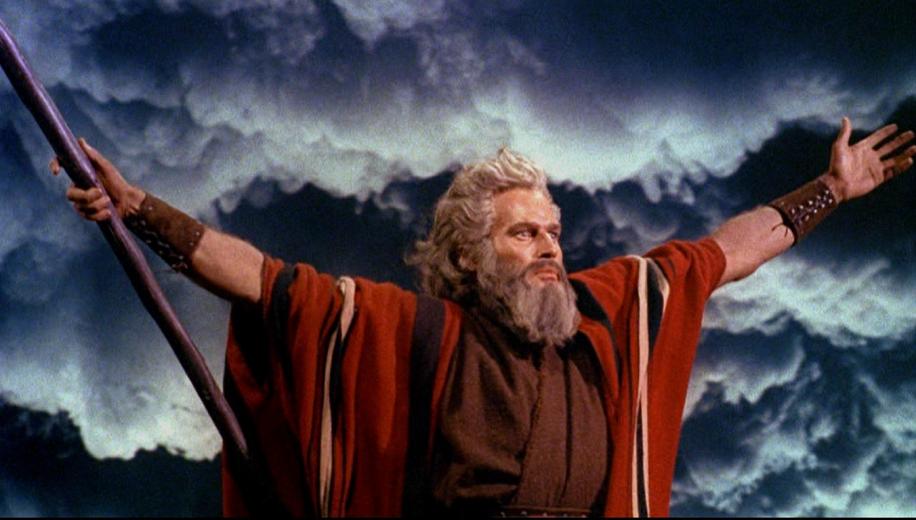 Ahhhh, the biblical epic. They don’t seem to be made anymore, with films like Noah, reimaging the story to modern audiences and despite clawing its way to success, it seems the thirst just isn’t there. Not so during Hollywood’s Golden Age, when studios were big and leading directors were bigger. Epics were just that, mammoth sprawling movies with stars galore, massive sets and a budget to match. Of them all, it is perhaps The Ten Commandments that stands tallest. A huge undertaking by a titan director: Cecil B. DeMille. He even spoke before the film started to instruct the audience on what they were about to see, which, boiled down to its essence, was a four hour fiction, albeit with the blessing and knowledge of many scholars and academics of the time.

The story tells of Moses, concentrating on his early life as a Prince of Egypt before finding out his true heritage and leading the Hebrew Exodus from enslavement. Everything about the film is extravagant; the massive sets, the hundreds of extras, the opulence of the costumes, the location filming and the special effects (ok, these now look terribly dated, but for the time... ). I’ll wager it did for bible sales what Peter Jackson’s films did for Lord of the Rings book sales. And it is interesting to note that the film presents the story as far as it can as historical, citing its credentials in the credits – and all this despite archaeological records pointing to no such event taking place, with most scholars suggesting Moses and the Exodus are allegorical and not literal.

But there is no denying the spectacle. The time taken to tell the story allows space for the characters and events to mean something, to affect the story. It does suffer a little from ‘diaphragm acting’ and is a little wordy, but that was the prevalent method of the time, and it is not difficult to become moved by the scale of the story. Interesting to think that if it were remade today, it would all be CGI and somehow lose that epic scale.

The Ten Commandments was shot using Mitchell VistaVision Cameras on 35mm film, with the source getting a 6K scan and clean up by Paramount in 2010; this new UHD uses that scan as its basis to from a new 4K DI. The disc presents a native 3840 x 2160p resolution image in the widescreen 1.78:1 aspect ratio, and uses 10-bit video depth, High Dynamic Range, a Wide Colour Gamut (WCG) and is encoded using the HEVC (H.265) codec for Dolby Vision and HRD10. We reviewed the Region free UK Ultra HD Blu-ray release of The Ten Commandments on a Panasonic 65DX902B Ultra HD 4K TV with a Panasonic DP-UB450 Dolby Vision HDR10+ 4K Ultra HD Blu-ray player.

There have been some truly magnificent pictures brought to the 4K format (2001, Lawrence of Arabia, Unforgiven, Spartacus) and this is another one to stand alongside them.

The preparation work done by Paramount in 2010 was terrific, with this new native 4K image being another pinnacle. Detail is sublime, skin texture, clothing weaves, from ornate Egyptian cloths and jewellery to the worn and grubby slave rags, from the desert sands to the straw and clay of the pits, from the glorious skies to the foot of Mount Horeb; everything is keen and clear.

The WGC and HDR give colours a new intensity; the blues and golds of the Egyptian jewellery, in fact any of the Egyptian decor is lush and vivid, while the banners are bright, sunsets are deep and meaningful while greenery is pure. Black levels are lovely; there is a tangible depth to frame and decent shadows, while the whites are brilliant, check out white cloth or clouds and there's no clipping to see.

Digitally there are no issues, and the source is pristine, keeping intact the film grain which is organic and natural. Of course, all this good does, on occasion, point to the special effects and blue/green screen/back projection, which was used during the making, drawing attention, but in all this good, we can forgive it.

The same English DTS-HD MA 5.1 track that was remastered for the 2010 Blu-ray release is replicated here. There is a decent amount of separation within the mix, heard primarily during the score (opening/closing overtures) where instruments are given layers; even if the mix is slightly forward facing. Dialogue is anchored to the centre and is layered well in the mix, since this is where the majority of the film audio lies.

Bass is somewhat limited, due to the nature of the film and the source, but the parting of the waves and their subsequent crashing down, as well as the climactic sinking of the sinners, are given some nice heft from the sub, otherwise the score takes a good portion. Effects are again limited, but there is some reasonable ambience given by the surrounds. Don’t expect, ahem, miracles, the source was never designed as such, but with a decent all round experience, keeping the original intent, is ok in my book.

Audio Commentary – As Above

The Ten Commandments is as epic as epic can be; mammoth in scale, sets, extras and opulence, and made by one of the all-time titans of the director’s guild. Telling the story of Moses, his early life through to the Exodus of the Hebrew slaves, has never felt so powerful and whilst limitations of the time regarding effects and acting style may date the picture somewhat, there is no denying the sheer verve of the piece.

As a 4K UHD, the set from Paramount is just as epic – the native 4K picture is as good as it gets, being beautifully detailed, wonderfully coloured with strong blacks and stunning whites. The DTS-HD 5.1 surround track is well separated and dynamic, matching the visuals. The extras package is unfortunately limited, considering what has come before and is the only negative.