Get your trousers on, you're nicked! 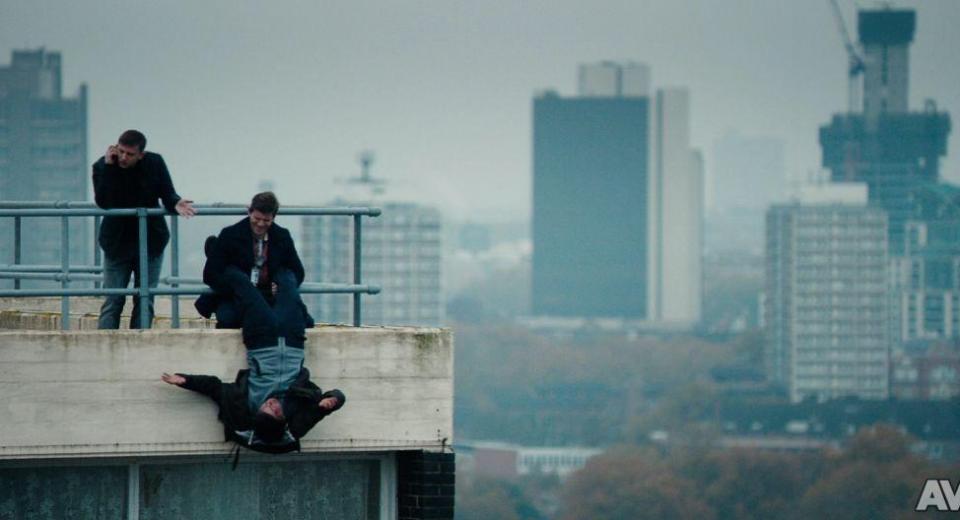 Shot digitally, the24fps AVC- MPEG transfer looks very true to the original movie. The blue-grey colour balance with quite grimy undertones suits the film well. A few scenes appear to have been under-lit and have had to be gained up to retain the shallow depth of field and filmic look. This comes across as visible noise with some solarising around streetlamps and other bright sources. Cinematographer Simon Dennis’s approach has been to avoid hand held camerawork in favour of stabilised track shots and Steadicam. This has led to a very fluid presentation that is easy on the eye and it all feels quite polished. Once again though, the lack of budget manifests itself, with pretty uninspiring set design. The use of Trafalgar Square, The Royal Parks, Royal College of Surgeons etc. all adds to the authenticity, but props and extras are all a bit limited and the scale and depth of the scenes suffers as a result. The latitude that digital film offers means that contrast issues are minimised and this film is no different. There is plenty of low level detail – witness the opulence in the walnut interior of the private bank, but where we do see the sky, occasionally it is burned out to flat grey. The Arri Alexxa used for the majority of shooting may only be 2K, but it retains the filmic look much better than the RED series in my opinion. The colour gamut just seems closer to film and this sort of movie needs this. Footage was also shots on a number of other formats, but has been nicely post processed to disguise the fact. For a low budget movie, it does not look at all bad, but it is hardly reference material.

The DTS-HD MA surround mix is competent and quite full on. It does feel a little bass heavy at times, but manages to avoid burying the dialogue. Effects are OK, but not always that well steered, again adding to the narrowness of the image at times. Winstone’s rasping tones and heavy East End accent could become hard to understand if not treated with respect, but the sound designer has done a good job to preserve everything here.

There is just one language on the disc – English, available as a 2.0 and 5.1 track, plus audio description and subtitles. I think this movie must have been sponsored by the UK Independence Party…

First moan: You have to sit or skip through too many trailers for other movies before you get to the menu. This is a pain, but at least once you have done this once, you can just skip to the movie proper.

Once we reach the main menu, things do improve. It looks really good and has the same high impact sound the rest of the movie enjoys. The extras include a commentary from Nick Love and a couple of the producers. Nick is something of a potty mouth and thinks he is funnier than he is. He really needed another performer to bounce off, but he makes a fair stab at it.

We also get a nice collection of featurettes:

Not a bad selection of extras, and that’s without the animated story boards. These are essentially cartoon animations of the planned sequences, made to assist the team in the more complex parts of the production. They show how it was necessary to make a few changes to the final shoot, but the essence was captured.

Director Nick Love has written a fairly good plot with an interesting ploy of dropping old firm policing into the modern era, but I feel he has not translated it overly well to the big screen. The sense of scale movies demand to work just is not here while the editing and lack of shoot time has left too many gaps in the story to work really well. It all feels like a TV movie, not a mainstream release. The lack of budget manifests itself in too many ways to make the film totally satisfying and it left me feeling that although I had enjoyed watching it, I wanted quite a lot more.

Technically, this has been competently made and even if it does not always fit the movie that well, Lorne Balfe’s powerful score is possibly the only thing you will go away remembering. Not a blockbuster by any means and feeling more like a TV movie than a full on cinema release, this film is something of a disappointment. It has moments of high drama, thuggery, violence and even the odd spot of brilliance, but overall I came away feeling disappointed. The transfer looks prettty good on the whole. The colour palette, exposure and even the general griminess suit the genre very well and the brash sound track peps things up a bit. One to buy? It depends how much you enjoy low budget British action or police movies. It is not a bad film, I just wanted it to be better.