“When I asked for your advice, I didn’t mean that you should actually speak.” 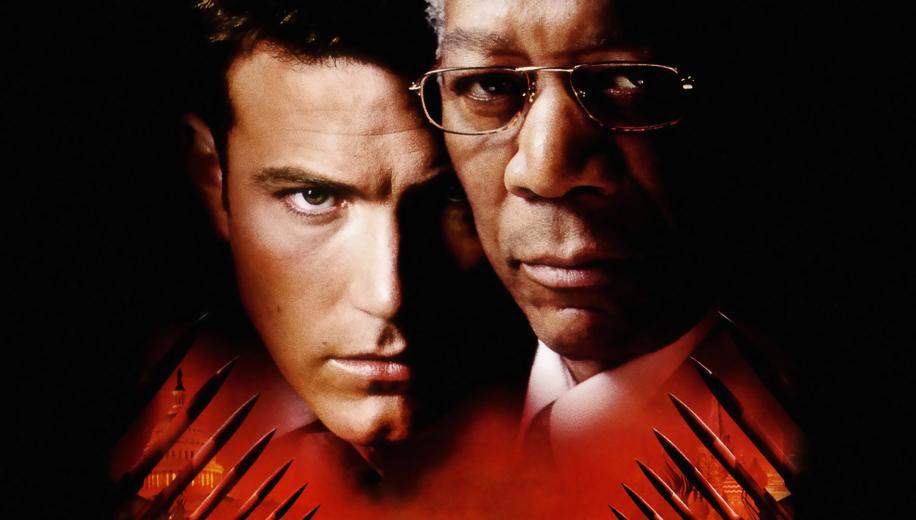 The Sum of All Fears Film Review

Harrison Ford's decision not to return for this third film of his contracted Jack Ryan trilogy effectively sealed the fate of the franchise, at least on the Big Screen.

After Patriot Games and the superior Clear and Present Danger, Harrison Ford was due to make one further Jack Ryan film with Philip Noyce once again helming, and production started pretty quickly on the chronological sequel novel to Clear and Present Danger, The Sum of All Fears, which would follow-up the events at the end of the last novel and movie with a new President whose dislike for Ryan leaves him with no choice but to approach the Russian President through back channels in order to stave off another nuclear war. For some reason Ford didn't like the screenplay and elected not to do the movie (eventually going on to do a similarly themed but far lesser Clancy-esque knock-off with Air Force One, which ironically was the progression of Ryan too, namely eventually becoming the President).

The loss of Ford left Producers scrambling around over what to do, and eventually choosing yet another reboot (after Patriot Games, and with Shadow Recruit to come, this is easily the film franchise with the most number of reboots in the least number of films - 4 out of 5 films were introductions to a new Ryan) but ill-advisedly maintaining the same story, which was wholly under-serviced by the fact that it had to cater for yet another original story for the central character.


They should have just persuaded Ford back.

Neither star Ben Affleck's fault (often blamed for his portrayal, he's actually a pretty competent Ryan, even if he'll always be regarded as third choice to Ford and Baldwin) nor the fault of the fantastic supporting cast, including the ever-great Morgan Freeman, Ciaran Hinds, Bridget Moynahan, James Cromwell and Liev Schrieber (as returning character John Clark, who was played by Willem Dafoe in the last movie), with the Studios making really bad decisions all around. Why make the direct sequel to the last story when you can't conclude the events from the last story (the fate of the corrupt President)? Why set the film in the modern day when that will only confuse viewers as to why the characters are all younger? They should have just persuaded Ford back, or chosen a similar actor to pick up where he left off, as this was the worst of both worlds.

Despite these behind the scenes issues, and their potential to cripple the production, the end result is still a surprisingly engaging little thriller, which has a grander scale to Ford's first entry, Patriot Games, and far more competently deals with suitably complex spy thrills and global threats. It has some thrilling setpieces and tense standoffs - the communications between Ryan and the Russians are pure Clancy (reminiscent of The Hunt for Red October) and perfectly sum up the character of Ryan too - and the film has one of the most shocking middle-act surprises in a spy thriller, and that's quite an achievement. The fact that it was effectively the start of the end for this film franchise is a technical point really, as, as a stand-alone film, it's a pretty damn good watch.

The Sum of All Fears 4K Picture

The 2002 fourth film in the series, The Sum of All Fears, was, like all of its predecessors, lensed with on 35mm, and the film has been rescanned and mastered in 4K, which has been used here for this Ultra HD Blu-ray release.


All three preceding Jack Ryan titles look better than ever in 4K, but The Sum of All Fears is the first to achieve demo status.

The first thing to note is that the 4K presentation of The Sum of All Fears follows suit in terms of the new colour grading to fall in-line with the preceding three movies with their new, colder, sometime monochromatic style, however due to the fact that it was a much more recently movie which boasted a much hotter style to the others, the end result is a much more pleasing middle-ground where there are still relatively healthy skin tones and some rather nice, vibrant pops of colour.

Detail benefits from a strong upgrade too - again the original Blu-ray was a better visual entry than the three before it, but the 4K presentation affords it a nice uptick across the board, bringing forth newfound levels of crispness and clarity, with no overt signs of digital manipulation. Faces showcase some of the best improvements over the softer Blu-ray's visuals, with some fine textures on offer here and a light veil of grain affording the presentation a filmic look but not betraying any of the underlying detail.

The colour scheme deserves more praise though, serviced by not only HDR and WCG but also that added Dolby Vision boost, which brings fiery yellow-orange explosions to life, massive blasts blooming into the sky, and the football stadium and fireworks lighting up the screen. There are some nice tones on offer, afforded a rich depth, with strong black levels underpinning the whole affair. All three preceding Jack Ryan titles look better than ever in 4K, but The Sum of All Fears is the first to achieve demo status.

The Sum of All Fears 4K Sound

The Sum of All Fears, as with the other Clancy titles in this Jack Ryan Collection, and as with the 4K Mission: Impossible 5-film Collection, hasn't been afforded any kind of Dolby Atmos enhancement, with Paramount going that extra mile for Dolby Vision, but rendering the audio in the same shape it was in a decade ago for the Blu-ray release.

The old Dolby TrueHD 5.1 track handles the material well in all respects. Dialogue comes across clearly and coherently throughout, largely dominating the frontal array and just about managing to stay above the rest of the proceedings (I’m talking about the oppressive score here) for the duration. Effects are also well rendered, from the louder setpieces involving crashes, explosions or blazing fires – mostly at the end of the second act – that allow for good separation across the surrounds and even some fairly noteworthy input from the rears. The LFE channel also gets a good workout. Whilst the quieter, more ambient moments are easily drowned out by the aforementioned score, that’s not a reflection of the track’s inability to pick up on the atmospheric nuances – it’s just that they become apparent only occasionally as a result.


A good accompaniment for the movie.

The score is an interesting choice, not done by James "I flagrantly rip off everybody including myself" Horner, but instead by Jerry Goldsmith, who provides a less plagiaristic but still resoundingly generic offering that just does not become the man who gave us the scores to Alien and many of the Star Trek movies. Irrespective of its clumsy attitude towards the ensuing action (the classical music excerpts are much more appropriate), the score itself is presented extremely well, and is arguably the second most important element on the track, giving the whole surround array a fair amount to do even when next to nothing of any urgency is occurring onscreen. Overall this is a good accompaniment for the movie: not quite demo-quality, but nonetheless impressive.

The Sum of All Fears 4K Extras

The 4K disc holds the same old Commentaries, whilst you have to flip to the Blu-ray to get he old Making-of, Featurettes and Trailer as well.

At the end of the day, if you set out to reboot a franchise based on an acclaimed series of novels and an established literary character, and end up not only failing to establish that character (Clancy's commentary is almost comedically uncomfortable listening - he just points out everything they did wrong here), instead actually managing to kill the entire franchise, nobody is going to remember the better aspects of your movie; they will merely remember it for being the largest nail in Jack Ryan’s coffin. That is, until Shadow Recruit came along and spat on the grave.

Taken as a one-shot political spy thriller, and almost pretending it has nothing to do with the Clancy/Ryan we know and love, it's actually a very enjoyable little film, but that's a tough ask for most fans.


Taken as a one-shot spy thriller, it's actually a very enjoyable little film.

Paramount's UK 4K Ultra HD Blu-ray release of The Sum of All Fears - at least for the time being - is only available as part of the 5-film Jack Ryan box set (which also includes The Hunt for Red October 4K, Patriot Games 4K, Clear and Present Danger 4K and Jack Ryan: Shadow Recruit 4K), but it's another great film in the package, coming with a good native 4K presentation complete with Dolby Vision, and arguably looking better than ever even if the sound is the same as before. The set comes highly recommended.