The Stranglers - On Stage/Screen DVD Review 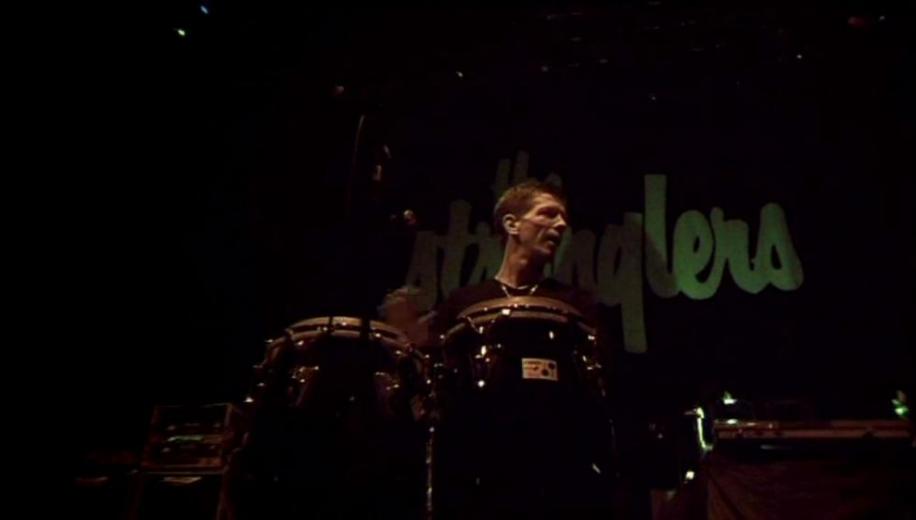 Presented in anamorphic widescreen at 1.85:1, the picture quality on this dual layered disc suffers from just about every problem in the book I'm afraid.
Top of that problems list is grain. Because the concert is filmed in low light conditions and it appears that cameras used are not of the highest quality, not enough light has been let into the iris and this results in the huge amounts of grain visible.
There's also a problem with black levels. Because of the outfits the band are wearing (they are all wearing black), detail often falls away and at times, there's nothing but a blurry mess onscreen with some coloured flashing lights on it.
I dare say that these problems will not bother fans who have purchased the disc for it's music content - but as a reviewer of the quality of the disc, I feel I must bring these problems to light.

Given the full Dolby Digital 5.1 treatment, the sound quality of the concert is the saving grace for the technical aspects of this disc.
Instrument placement is spot on and the vocals are locked solid to the centre of the screen.
Bass is evident in abundance but is well controlled and never dominates the proceedings unless it's meant to.
Surround effects are sporadic and limited to crowd effects. However, they are clear and concise and every now and again, the odd swear word will spring from the rear left or right channel as the fans relive their youth...honestly...if only their mothers could hear them! Not really an extra as such, the short film Norfolk Coast starring Jean Jaque Burnel from the band. It's actually included as part of the main package but I thought I would cover it as an extra so that I had something to put in this section...


It's a bit of an arty affair to be honest and tells the story of Warner (played by Burnel) whose wife and just left him. She ends up committing suicide and the film follows his struggle to come to terms with it.
Presented in anamorphic widescreen at 1.85:1 and Dolby Digital 2.0, it's a bit depressing really.
Fans of Burnel will no doubt love to see him spreading his wings into the acting world - but for me, at 17 minutes long, I found even that a little too long... If you've read through this review, you may have worked out that I'm not exactly a fan of The Stranglers. However, that could well turn out to be this discs saving grace.

If I, a man who would rather listen to the likes of Frank Sinatra and Dean Martin, found 50% of the musical content to my liking, that can't be a bad thing now, can it? I was particularly impressed with the content and presentation of the acoustic set, though one or two tracks on the live set did bring back memories of my single days living in Germany and visiting little night clubs in Hanover and Hamburg - less said about those days the better as I'm enjoying married life now...

As a DVD, the picture quality fails miserably on all fronts but is supported by a fantastic Dolby Digital 5.1 soundtrack that brings every trick to the party.

if you're in the party mood, avoid the Norfolk Coast short film at all costs - it's terribly depressing.

The Stranglers: On Stage/Onscreen can be very highly recommended to fans of the band but those dipping their toes in their music for the first time may want to try the rental route first.