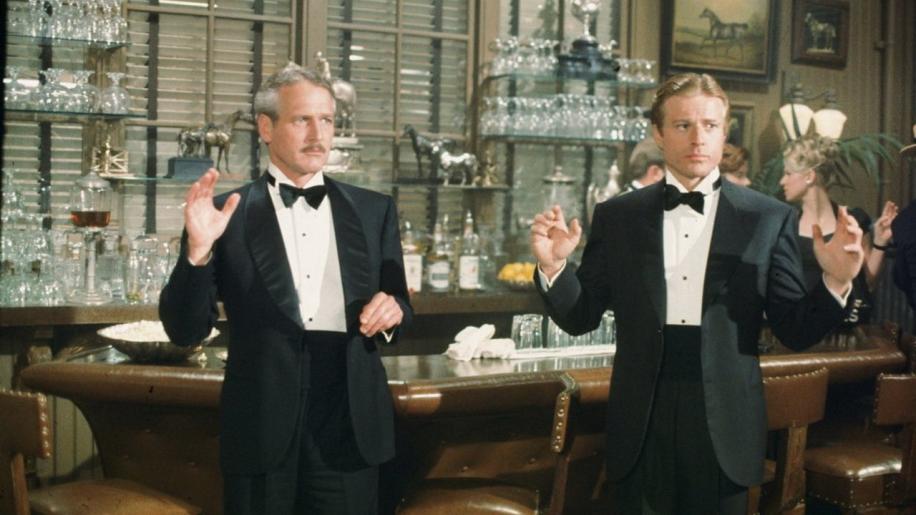 Full marks must go to Universal for assembling an astounding transfer. It's difficult to contemplate when watching the film that 'The Sting' is now over 30 years old. This anamorphic print is virtually flawless considering its age and dirt and damage is nowhere to be seen. The decision to devote the entire first disc solely to the movie really pays dividends here, as there is no evidence of artifacing, edge enhancement or pixilation whatsoever. Colours are rich and vivid, and the superb period cinematography really comes to life. If there is any slight complaints to be made is that there is brief shimmering on a couple of occasions, and the transfer does sporadically become noticeably softer from scene to scene. Bearing in mind the fact that the film is no spring chicken though, these minor flaws can be forgiven. Otherwise superb. The audio quality offered here more than holds its own alongside the formidable transfer. There are a wealth of audio options here, which cater for all tastes. Top of the pile is the marvellous new DTS mix which makes the classic ragtime period score come to sumptuous life across all five speakers. Despite its status as a verbose comedy, rears are nevertheless given a solid workout throughout and the soundtrack is deep and satisfyingly warm. The music, though fantastically recreated, is never intrusive on the dialogue, which is always crystal clear. Likewise the standard 5.1 soundtrack proves more than adequate, sacrificing just a slight level of solid clarity that the DTS offers. The original mono track is included for the purists (although it's no match for the new mixes), as are Spanish and French dubbed tracks. An almost faultless selection. On first glance, the bonus disc looks disappointingly bare on supplements. The obligatory trailer and production notes make a fleeting appearance, but this second disc really comes to life with the main feature 'The Art of the Sting', a stunning hour-long documentary which proves this is a release geared to quality not quantity. Although it would certainly have been nice to have a commentary from Redford and Newman or perhaps a noted historian, this sheer class of the retrospective more than makes up for this. Too often additional features are crudely constructed from a miss-mash of throwaway interviews and clips. Not so here, as it is apparent from the very first minute that this retrospective has been expertly and systematically crafted and proves a fitting accompaniment to the film. All the surviving cast members and filmmakers are interviewed (we are even treated to posthumous words from the late Ray Walston), and they provide an informative and entertaining look back at every facet of the film, from the nucleus of its production through to set design and filming. There is an abundance of anecdotal tales from the stars and the documentary proves an invaluable remembrance of the legacy the film has left behind. Watching the documentary as a lover of both the film and the era from which it was created is a sheer joy, and far outweighs any concerns over the lack of any other substantial additions. 'The Sting' is a film that everyone who considers themselves a true cinephile should own. For such a landmark film it has spent what seems like a lifetime in the digital wilderness with fans having to make do with substandard releases on DVD. Their wait has finally come to an end though with this first-class package. Everything about this release oozes class and quality, right from the elegant digipack packaging through to the lovingly assembled documentary and the superb restored print. An essential purchase, and a near impeccable one.