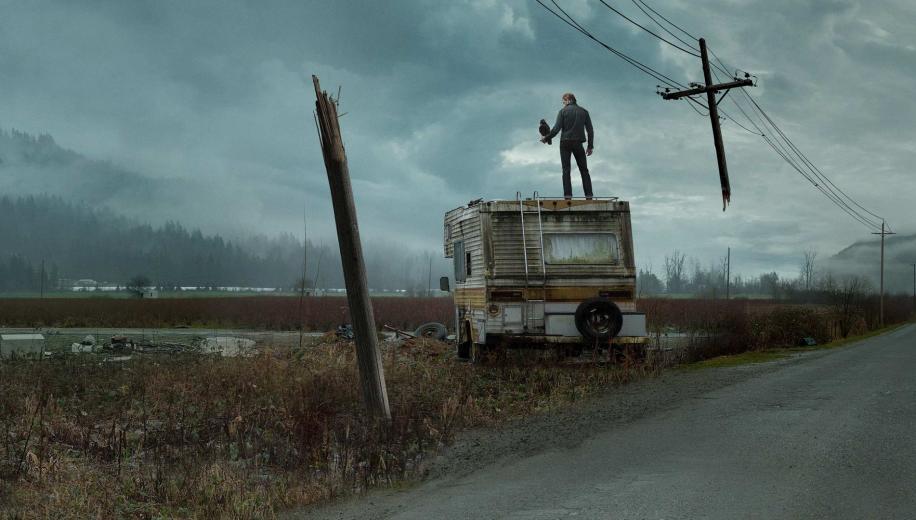 As we navigate our way through another nationwide lockdown, approaching a year of pandemic now, a TV series about an extremely virulent flu-based plague virus which decimates the population seems pretty close to home. Then again, with Contagion being one of the more popular titles streamed on Netflix, perhaps just what people need is a righteous Stephen King Act of God.

Thankfully, at least insofar as the first episode betrays, they shot for dark and faithful and got off to a good start in the process

After a weaponised strain of influenza escapes a military research facility, 99% of the population of America are killed, leaving the survivors - a strange collection of disparate individuals seemingly immune to the virus - to bury the bodies, pick up the pieces and forge some kind of new life. But was the virus spread by accident, or was there some hand at play in all of this, and will the survivors all choose the right path, or will some be tempted towards evil...?

Stephen King's religiously-infused 1200 page The Stand was his longest work (besting It by a few dozen pages), which - as is often the case with King's works - showcased some serious magic when it came to bringing the colourful core characters to life, even if the ending was never going to quite live up to the journey. In 1994 it enjoyed a worthy TV adaptation with a then-upcoming list of future stars like Gary Sinise and Rob Lowe, which did justice to the material even if it too struggled to stick the landing (not least thanks to limited budget 90s effects). Given King's massive resurgence in popularity over the last decade - seeing adaptations of It, Doctor Sleep, The Dark Tower, Pet Sematary, Carrie, Cell, 1922, Gerald's Game, and In the Tall Grass, as well as TV shows like The Mist, Under the Dome, Mr. Mercedes, The Outsider, and the King-inspired Castle Rock - a revisit to The Stand seemed all-but inevitable, and thankfully, at least insofar as the first episode betrays, they shot for dark and faithful and got off to a good start in the process.

The opening episode, complete with a number of flash-forwards / flash-backs, introduces a number of core characters who will help carry viewers on this voyage, including James Marsden's (Westworld) Stu Redman, who gets to watch the outbreak from the ground-up in a research facility where he is quarantined in the hopes that his immunity can be used to form a cure. Meanwhile brooding, repressed and bullied teen Harold Lauder (Owen Teague, It) is desperate to find a way back into the life of the object of his affection, his former babysitter Frances (Odessa Young, Assassination Nation), seizing the opportunity when the plague hits. But the way is not smooth for any of them, with visions plaguing them - both from an elderly Whoopi Goldberg drawing the survivors to her home, and from Alexander Skarsgård's (Big Little Lies) slick drifter, who has much more nefarious plans in store for them all.

With a strong cast (the Skarsgårds clearly having a line in King villains), and some resolutely bleak overtones, The Stand doesn't mess around, but it also doesn't ignore the source prose, nor the legwork necessary to build the characters. Scenes like the bullying of Harold are classic King - and could easily have been from Stand by Me or It - and similarly there's room in amidst the doom for playfulness and humour, not least from Hamish Linklater (Legion) as one of the scientists hoping to find a cure in Redman's blood, and choosing humour to combat his stress.

It's just the start, but it is a strong start nonetheless

It's just the start, and US viewers will no doubt have more of an inclining about whether or not it's all downhill from here, but it is a strong start nonetheless, pacing the tale right, jumping back and forth with just the right amount of clever revelation (the closing tale of the Campion is superbly done), and sowing the seeds of happiness/discontent amidst the core characters, leaving you eager to see how this pans out and likely frustrated by the 9 weeks that it will take to unfold (although perhaps that couldn't have come at a better time).

Shot and adapted for the screen by The New Mutants' Josh Boone (well, at least a couple of episodes), this is a much more assured work than his Big Screen shot at the big time, with more room to embrace the horror too, dabbing exaggerations around the edges - particularly when it comes to the painful deaths of those infected - but also infusing the piece with just the right amount of supernatural foreboding. It also enjoys a healthy budget that also doesn't try to exceed its limitations, looking slick but also lived-in. Unlike several recent apocalyptic/post-apocalyptic reinventions of classic works - not least the two lacklustre shots at bringing War of the Worlds to life - The Stand is on solid footing to be one to actually stay tuned for weekly, and perhaps staying faithful to the book will do the trick here... at least until the ending...

The Stand is released weekly on Starz (available through the App, or as an Amazon Prime or Virgin TV subscription channel add-on).
﻿