The Squid And The Whale DVD Review 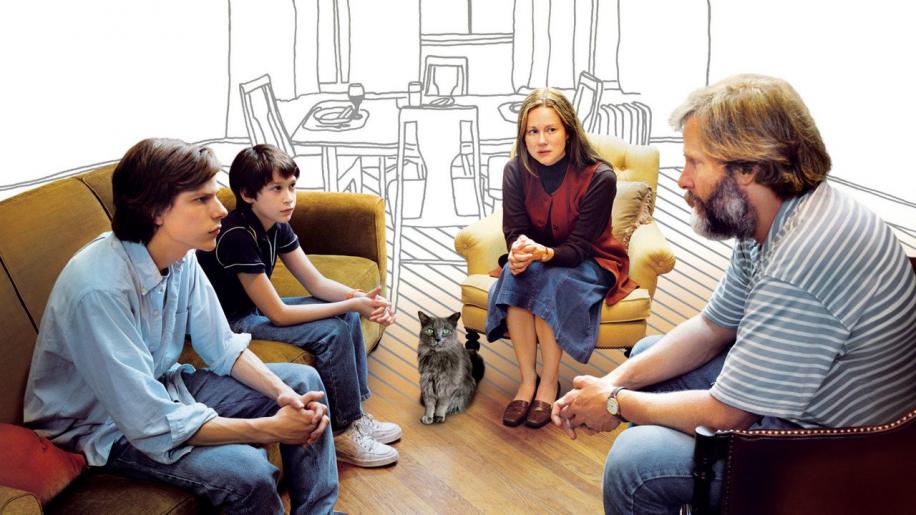 Baumbach's film is a tight low-budget effort and the visual look of the film reflects that. The picture is grainy - though not overly so - and it often has a raw feel, instilled by his use of Super 16 mm handheld cameras. He obviously did not want the polished sheen of a big movie and, as such, the DVD transfer may well accentuate the shortcomings of the print. There's a small amount of damage visible, of the scratch, black dot and fleck variety, and the colours are drained of all vitality, leading to a washed-out, sometimes drab appearance. But all this is in keeping with the style of the film and should not be a problem. However, the area that caused me some concern was the level of edge enhancement apparent. I viewed this on a 44 inch screen and once the effect had caught my eye, I simply couldn't get away from it.

There is also some problems with the contrast. Blacks aren't solid and can veer too far into smudgy grey murk and there are several scenes in which portions of the screen are far too bright when compared to the rest of the image - Anna Paquin's student approaching Bernard after class, for instance. Detail in the picture, though, is actually quite good. Initially, I thought the image was soft and indistinct, but very soon afterwards it seems to stabilise, revealing some nice information behind the actors - the bookshelves, the posters on the walls (like that early one for John Carpenter's The Thing), the view down the train tracks or of the houses opposite the original family home. Faces are pretty well etched when up close, and skin tones reasonably realistic.

Overall, it is a serviceable transfer of film that is proud to look shabby. Although it comes with a Dolby Digital 5.1 mix, you can't really be surprised to find out that it doesn't exactly set your set-up alight. The Squid And The Whale is a dialogue-driven movie with absolutely no need of rear support. There is a little bit taking place back there, but you'd have to squash your ear up to the speaker to hear it. Little more than a few pockets of ambience is projected.

The front soundstage is pretty well catered for, though, with a few elements of steerage across the speakers, some nice effects, such as car doors, voices, ringing phones and a cool off-camera kitchen accident to pep things up a bit. The dialogue is clear and well presented and the score, although sporadic, has some warmth and a pleasant sense of a depth. There are no faults with the audio transfer and if it seems underwhelming, then you just have to remember the low-key style is one that the film wants to achieve. Noah Baumbach's commentary, in line with his indie-approach to filmmaking, is not exactly your typical chat-track. Eschewing convention, he opts to have his commentary play over, not the film itself, but rather a series of stills from it. In his introduction he claims not to like the usual commentaries, not wanting to sit through scene after scene of the finished product again, discussing its creation in finite detail. Thus, we get his thoughts and musings on the different aspects of making the film, namely the casting of the characters, the writing and the cinematography. Yet despite his aversion to the anal qualities of some commentaries, he is still scene-specific, albeit in a more random kind of way. He still discusses some scenes, some shots, with very detailed and precise attention, actually making you wish they were on-screen as he speaks, to help illustrate his point. Set out in 35 chapters, the pseudo-commentary runs for 51.59 mins and is very informative, quite breezy and entertaining. The tricky elements of Frank masturbating and drinking whisky are only briefly touched upon, though. As Owen Kline and his parents are family friends of Baumbach and his wife, this plot strand must have been very difficult to film, indeed, and the director seems thankful that it is all over now.

The brief Behind-The-Scenes Featurette (9.56 mins) is a very casual, laconic look at the making of the film, with a few clips thrown in and some relaxed thoughts from Linney, Daniels, Baldwin and Baumbach. There's some rehearsal footage and a few pep talks in-between takes, too. Funnily enough, Jesse Eisenberg, who pleaded to Baumbach during his many auditions that he was Walt, comes across, off-set, as being exactly that ... believe me.

Then we get a 37.31 mins interview with Baumbach conducted by the New York writer Phillip Lapote during the HBO Dialogues at the 2005 New York Film Festival. Although filmed in front of an audience, this is not an open forum. Lapote and Baumbach shoot the breeze, with Lapote rambling off a few questions and Baumbach then rambling off a few stuttering answers, the pair competing in the intellectualising of the whole affair until it becomes just plain tedious. The points that Baumbach wanted to raise are plain to see in the finished film - all this dissecting and pontificating just dilutes the thing, I'm afraid. The piece is reasonably thorough, but it just feels so slow and ramshackle and, ultimately, it descends into a treatise on how autobiographical it is of Baumbach's own experiences. The film pokes fun at the intellectual mindset, yet these two act in just such an irritating, cerebral round-the-houses fashion, themselves, trying to delve ever-deeper into its meanings but succeeding only in waffling themselves in stammering corners. In fact, only Tim Burton can say “you know” more times in one sentence than Noah Baumbach. Folks, I got restless five minutes into this - so good luck to you.

We also get an unbelievable amount of previews for the likes of The Tenants, London, Capote, The Dying Gaul, Junebug, and many others.

A nice touch, though, is the collectible booklet which comprises two illuminating, though overly deep and philosophical essays on the film.

Not a bad set of extras, considering the smallscale, and personal nature of the film, though perhaps in the long run, there's too much here that goes nowhere. The film, itself, and the pseudo-commentary say it all, really A funny, poignant and cleverly written drama, certainly, but it is the performances that keep the attention. There has been lots of critical acclaim for Jeff Daniels already, and he is truly on top form here, but then so is everyone else. Laura Linney adds a strong lynchpin to the peculiar conflict, and Anna Paquin provides a terrific, and quirky, spin to the proceedings, but it is the two boys who really excel. Their performances combined lift The Squid And The Whale up out of the modest indie path that the film traipses, supplying some marvellous sparring partners for the squabbling adults. They have difficult roles to assume, and both Jesse Eisenberg and Owen Kline manage it with style and assuredness.

Sony's disc is a reasonably stocked affair- the commentary from Baumbach is a step out of the norm and the brief making-of is nice and light - but the AV quality is hardly inspiring. Still, The Squid And The Whale comes very highly recommended. It's odd, affecting and surprisingly upbeat considering its topic.