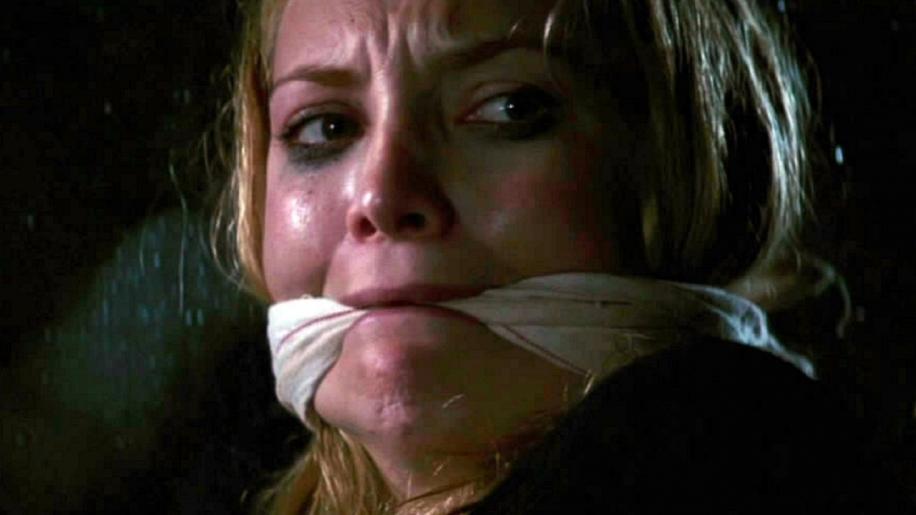 Presented in an anamorphic 2.35:1 transfer, this is a wonderful looking title. No grain was present nor were there any scratches or dust specks affecting the print, although as I normally say, there shouldn't really be any with recent movies. Skin tones look natural, although some detail does look lost as the image looks a little soft, but this is really a minor niggle. Black levels are very dark, which is especially necessary, when the movie does have its fair share of night/dark scenes, particularly in the attic and during the final 30 minutes of the movie. No artefacts were noticed either, so I can't really knock the transfer at all, except for the minor softness.

Hmmmm, this one isn't easy as I'm in two minds for this. It's not completely an active soundstage for the entire movie as such, with rears giving some ambient effects, but when the soundtrack is called on to be more dynamic, it does so in spades. For example, there's a great scene where Caroline is with John, you can hear the rain all around and a crack of thunder and lightning occurs at a point, the LFE booms nicely to deliver a stinger as well as to give amazing weight to the storm outside.

Dialogue is clear throughout, even during the more lively moments and as stated, there are some nice LFE moments, but the emphasis is on moments. However, I actually enjoyed some of the music that was playing on the soundtrack, with it being clear and distinct and giving a great feeling of the area we're viewing. The caveat I have for the soundtrack is that it isn't always engaging, in fact it's more not than often, although for the first two-thirds of the movie, it isn't completely required, but when it's good, it's very good.

First up we have 21 minutes of deleted scenes, with commentary, but without any option of choosing the scenes. The scenes are mostly extensions from the movie rather that complete scenes and nothing more - not even an alternate ending surprisingly! Next up is Behind The Locked Door - Making The Skeleton Key which runs for a mind blowing 5min27sec. In that time we learn that the director is wonderful, the story is a good horror/thriller and that Kate Hudson really believes in the spirit side of things. No offence, but this has to be the lamest making of I've seen, not only for content but for the running time, or lack of one. Exploring Voodoo/Hoodoo is a 4 minute featurette which explains Voodoo as a religion, Hoodoo and features some scary people in it. Can I just mention to these people herbs is pronounced “Herbs” not “Erbs” as there's an H in it. Again, in 4 minutes you don't really learn or hear a huge amount of information that you probably don't know already. Recipe & Ritual: Making the Perfect Gumbo is literally a 3 minute feature on how to make a “perfect” gumbo. I can't say I tested it, neither can I suggest that it is a useful featurette. Blues in the Bayou is a 6 minute featurette which elaborates on the music in the movie, which is particularly interesting as I mentioned earlier, the soundtrack music-wise is rather good, even if the featurette doesn't contain enough of the music. Kate Hudson's Ghost Story is, surprisingly, Kate Hudson sharing a personal ghost story and it runs for 2mins30secs. Dull is the only way to describe it. Plantation Life is another 3 minute featurette which explains a lot about the plantations used in the movie, again it is quite weak as it never really has time to give any real information. Casting The Skeleton Key is a 10 minute featurette which, believe it or not, revolves around the casting of the characters for the movie. It's pretty gushy stuff really, but they do elaborate on the characters and motivations, so try not to watch this before the movie, it won't be a smart move. John Hurt's Story is basically John Hurt reading a story from a book, with regards to a tale from a slave. It's interesting from a story perspective, but not really as an extra. A House Called Felicity is a 5 minute featurette which focuses on the house that the movie revolves around, called Felicity due to the name of the plantation it is on. It's primarily a “location” type featurette more than anything else which isn't particularly interesting sadly. Gena's Love Spell which lasts 1min17secs is Gena reading a love spell - literally. Yes this is pretty hokey stuff. Finishing the disk off we have the director's commentary and trailers for Red Eye and King Kong.I have to say that this disk is a prime example of quantity over quality really.

The Skelton Key is an enjoyable movie, even more so on a second viewing because you know what to look for and you can see how it all fits in while you watch it, but it is not an outstanding movie. Some people think Kate Hudson was wrong for the role and in part, I probably agree, but I admire the way she chose something different over her usual quirky roles, almost seeming to mirror her mothers career in that regard. The biggest problem is the unfortunate hype that some people gave this, which if you read or hear a lot of it, by the time you watch the movie, you may well be as disappointed with the climax as I was. If you manage to miss out on this word of mouth, you'll have a heck of a ride.