Emotion, impulse. The Sims level up. 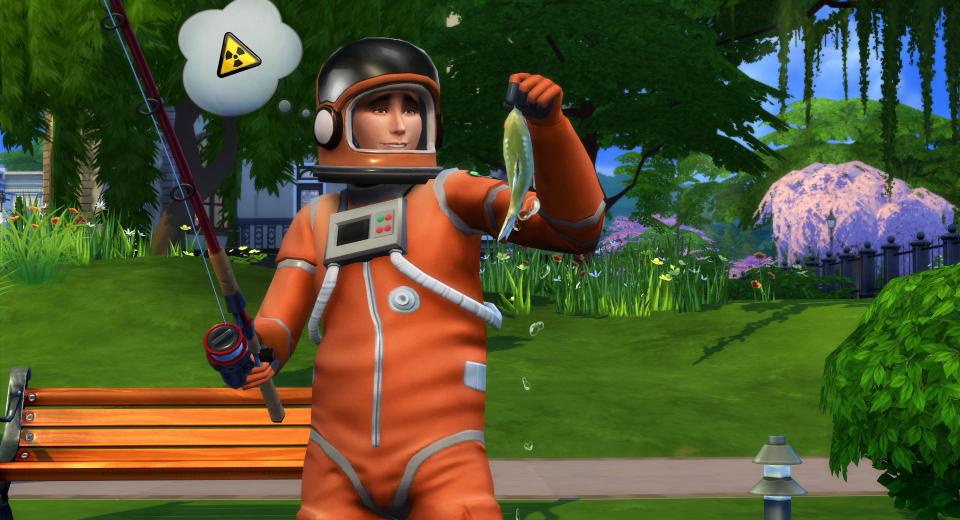 Like many of EA’s franchise reboots, The Sims 4 has arrived on PC in a lightweight, pared-back fashion.

After selling millions of units and producing countless more commercialised add-on packs littering the bargain buckets of your local supermarket, EA has finally stripped away the clutter and freshened up the core mechanics that drive its evergreen money-maker, creating a platform on which countless further popstar-themed expansions will be bolted. You might love it; you might loathe it; you probably already know which.

So, gone are the vast itineraries of objects, clothing, pets, pools and other exotic content, and in its stead is a basic roster of homes, furniture, outfits and other trinkets to aid your Sims’ happiness, career progression and ambition. It’s a game that remains a temple for consumerism at its heart, with the overall fulfilment of your virtual characters linked to ever-more-expensive items and spaces, career-building salary increases and romantic endeavours. The basics remain familiar. You’ll begin by creating a virtual person with an appearance and body shape of your choosing, with the option to create several more and define family ties. The character creation tools have taken a leaf out of the Spore playbook this time round, with individual body parts capable of morphing and minute adjustments to their pleasantly-cartoonish features. Like much of The Sims 4, the UI and editor for this stuff is simply superb, and there’s always the randomise button for those that simply can’t be bothered with tweaking philtrum depth or the placement of a cheekbone.

Once you’re done, you’ll move your Sims into a chosen residence from one of two neighbourhoods which broadly represent either leafy suburbs or a desert outback. The rest of the houses in your location are already populated by families and AI characters, while any other created characters can be moved in to the vacant lots to live their own lives, devoid of direct interaction (should you want them to). On that note, if you’re making virtual representations of friends and partners to wander your town and provide potential love interests, be very careful; awkward conversations may ensue. Once you’re moved in and settled, the usual micro-management of any Sims game kicks into play. Character fulfilment bars remain with their glowing-green, amber or red notifications for hygiene, bladder, fun, tiredness and hunger, and it’s down to your choice of activities as to whether your Sim ends up needing the loo at 4 in the morning or sleeping soundly to wake up energized. The AI is much more robust this time around however, and if left to their own devices your Sims will at least take care of their basic needs. They can now multi-task and hold conversations whilst performing other activities, and they generally behave a lot more like social beings when confronted with group situations.

So given their new-found autonomy, The Sims 4 focuses its management efforts on taking care of emotions and whims, and it’s a far better game for their introduction.

Like real-life folk, your Sims are now prone to wild swings of emotion that can be triggered in various situations, usually dictated by a series of personality traits defined during their creation. Specify that your Sim hates children and they’ll become depressed and anxious around babies, for example, while an outgoing extrovert will need boosting if nobody listens to them for lengthy periods of time. There are a whole host of those to choose from, and the personality traits of other Sims can be gleaned from conversation and interaction, providing more angles with which to become close or push their buttons. So to truly mould your Sim you’ll need to take advantage of those moods and strike while the iron is hot. A series of whims will pop up as they progress into various mental states, and fulfilling those dictates their overall progression. As an example, my computer programmer videogame geek will often become inspired after socialising for a while, and might want to write a book, hack a company or start a frisky painting if he’s been talking to somebody of the opposite sex for a lengthy time. Allow him to partake in those activities and he'll level up, gaining new interactions and further conversation options.

For the most part, managing those aspirational elements of somebody’s life is undeniably a much more interesting task than asking them to pee for the fifth time in a day, but there are still a few problems that stop The Sims 4 from capitalising on its new direction.

Often-times the social goals simply move too fast. It can be difficult to manage a conversation when moods change so quickly depending on the topic being discussed, and specific interactions are sometimes bafflingly hidden even though they were present a moment ago. Other times the character whims can simply become stuck, leaving them in place for days at a time until you begrudgingly do the exact thing your Sim wants, even if it’s something diametrically opposed to their personality (no I don’t want to make friends with the be-hatted preppy douche-bag in sunglasses, thank you very much).

Are there still bugs in The Sims 4? And as ever, there are plenty of bugs to be found within character AI and pathfinding, some of which actually add positively to the bizarro-comic landscape all Sims players find themselves in. Regardless, they remain bugs.

Characters will often turn up at your door whilst your Sim is at work - knocking four or five times and standing there for hours at a time before they trundle off in a depressed state - and it’s not uncommon for your Sim to circuit an object for a while rather than interact, then simply give up. Whole activities cued in their task sequence disappear for no good reason, while the number of bizarre interactions that happen on the streets of your neighbourhood serve to render The Sims 4 as a strange performance comedy, to which you either fully commit or gaze on at in disbelief. Alcohol helps.

And despite the necessarily pared-back fresh start of this version, there are whole sections of life here that are notable by their absence. Chief amongst those is the well-publicised toddler phase (babies just morph into young adults for some reason), and while the selection of museums and social spaces provide some recreational opportunity for your characters, for some reason there are no shops - everything is ordered in build mode. Careers still take place under the shroud of secrecy that The Sims has always dictated (what do they get up to during daytime hours?), but this would have been a perfect opportunity to provide a little more interaction with the workplace beyond choosing an occasional specialist direction.

Much like one of EA’s sports franchises, The Sims 4 has been stripped, oiled and re-tuned for a new generation. The new features, whims and emotions are largely positive, adding layers of interesting interactions to its base gameplay. The creation tools meanwhile, are utterly superb. Tooling around and crafting your own character or house is a joyous experience, and probably the best part of the whole package.

But like so many of their other titles to go through the same process, the lack of content inThe Sims 4 is ultimately noticeable. Whole phases of life are either missing or still completely shrouded in secrecy, and although the overhauled visual engine is more adept at providing a clean and characterful environment to live out your fantasies, The Sims 4's prolific roster of bugs populates that land with cartoonish avatars that could only charitably be characterised as extremely eccentric.

It's not a bad game by any means, and this is still the same experience that Sims lovers will take to in droves, but the whiff of missed opportunity hangs dense in the air, like smoke from a bachelorette kitchen.