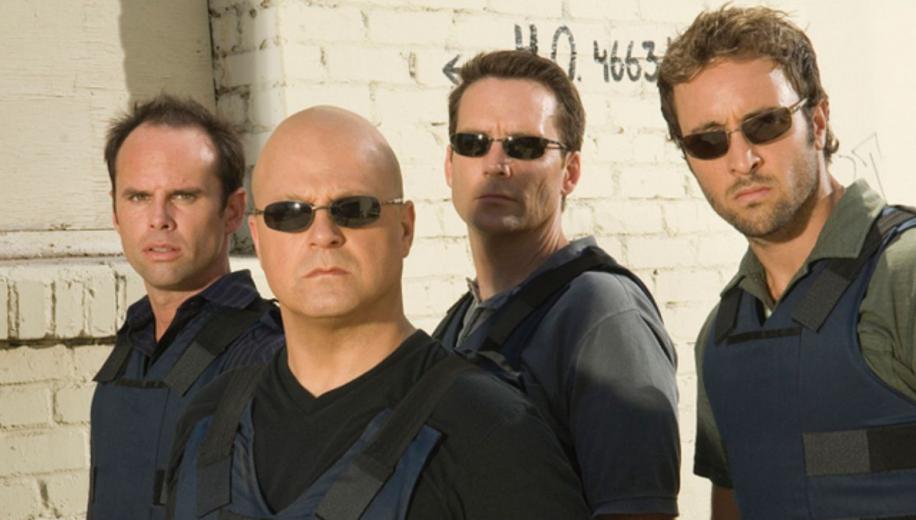 This is a really tough call. I know that the picture is purposefully bad, as this is the technique The Shield is shot in. So, do I look at the picture and say “this is artistic licence, this is how it is supposed to be, this is therefore a good picture.” Or “No, no matter what the argument, a poor picture is a poor picture, period. If the makers strive for it, then it doesn't mean that a bad image suddenly becomes good.” I have decided on the latter because I cannot be sure other productions are as purposefully bad as this, and by using a sure datum of quality, any ambiguity is removed.

I am taking time to explain this as The Shield really does have a shocking image quality. Not only is there always an industrial grain onscreen, the intensity of said grain changing from scene to scene, even shot to shot. Again, this reminds me of French Connection and that unfiltered rawness of the movie, or NYPD Blue, come to think on it. The Shield goes one step further than either title, though: massive over exposure and distortion occur after actors are shot against an unmasked sun. Or, in one scene, the red values seem shifted off centre to the rest of the picture, creating a blurred ghost image like effect, but only at the top half of the screen. Even when a camera zooms into the action, the artificial grain is magnified, too, like those of bad UFO sightings. The picture is very contrast heavy, too, an unnatural imbalance to the extremes of darkest and lightest. This gives a vivid image, but not the most natural, or the smoothest. Despite this, I like The Shield colour pallet. There is a warm, raw umber, feel to outdoor locations: the sun appearing to be a hot yellow heat, the streets (presumably) a slightly sepia-toned run down parody, of the real thing. Interior colours are less 'imbalanced' but always well chosen and well implemented.
Clearly, The Shield has a style of it's own and I can certainly identify with that. So, while the score is poor, this in no way makes this box set a poor watch. Quite the contrary. So, the picture is good, but really bad at the same time. Unfortunately, the sound is just bad. There is certainly an argument for the stylised approach of the picture, but sound is different and cannot be subjected to the same roughed down approach. Considering the densely packed writing, information heavy plots and action orientated scenes, clarity of sound is crucial. Unfortunately The Shield fails on this expectation. Remember old analogue Sky? Remember how voices sometimes had a persistent hiss in the background, coming and going as the actor spoke? Well that is present here in varying degrees of invasiveness. There is a muddied, compressed feel to the sound, like a badly packaged mp3 file, reducing the impact of onscreen action. A near total lack of true bass content doesn't help matters, either. In fact, my sub switched itself off and never came back on making me think there was something wrong with my kit. There wasn't, it was just a lack of any real thunder on the disc. Surround, using either DPLIIx or NEO6 listening modes, was nearly invisible. While this is a negative point, in the context of this box set, a lack of rear speaker action may not be a bad thing: Adding more poorly realised sound to the rears would only make matters less clear.

Again, it is the centre that has the toughest job of all your speakers, and you will need a high quality item to extract the best possible sound from this disc. Owners of budget sub/sat systems (I listened to this on my PC using some Logitech THX 5.1 speakers and matters were considerably worse) and value orientated full size packages may struggle to find an enjoyable listen, here. Presented in a mere Dolby Surround, there isn't a single title crying out for a proper sound mix more than this. Hell if Oz, can pull off a 5.1 track, then so can The Shield. Commentaries are interesting if a little plain. There is a lot of “actorish” insights that doubtless would make more sense to those in the profession but, to me, seemed a little too self indulgent.

Deleted scenes are as useless as normal. I really don't see the value in showing scenes that were dropped from the show. After all they were dropped for a reason and that reason is that they didn't work. Money for old rope springs to mind...

If the other extras seem underwhelming, then Breaking Episode 315 is a fantastic documentary. It has everything you could want in a documentary, never seems forced or false and always presents a candid look into the making of a single episode. The shear amount of creative juices flowing around 'the writer's room' as ideas are shot down or grown is fantastic to behold. However it is the bad times that reveal more than the good. Take, for example, the issue of a poorly written scene that just doesn't work. Shawn Ryder immediately takes on the blame as a writer in the show and tries to make amends the next day back in the writer's room. It is this eyes pealed approach, alongside the huge wealth of information presented, that makes this one of the best making of... documentaries that I have seen.

One good extra for an entire series does not make a good showing, though. Perhaps some scene rehearsals, some readings for the extra's parts or even some character insights from the actors would have bulked up this otherwise anaemic release. Perhaps the biggest accolade that I can heap on this release is that I have bought both Season One and Two on the strength of this Season Three box-set. The oil and water characters trying the best to mix together, the political intrigue, the unflinching tolerance of taboos and, let's not forget, unabridged violence, make The Shield a Classic. It's just a shame the sound and extras don't live up to expectations.