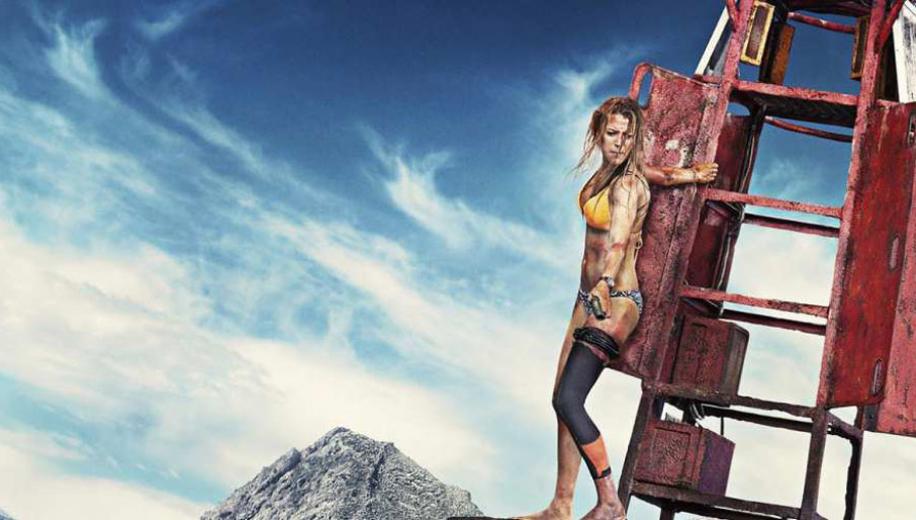 The Shallows is a great little aquatic thriller that, despite over-playing its hand in the third act, manages to keep you engaged right up to the end.

Nancy is a final year medical student who's mother has recently died of cancer. As a result she questions her choice of career and heads off to Mexico to find a secluded beach that her mother visited whilst pregnant with Nancy. Since she is also an accomplished surfer, once she does find the beach she spends the afternoon surfing, before heading out to catch one last wave. Unfortunately she gets more than she bargained for as she strays in to the feeding territory of a great white shark and has to battle to survive. This simple setup is very well executed and despite the film spending the majority of its short running time with Nancy clinging to a rock or a buoy, the tension never lets up.
Director Jaume Collet-Serra uses real locations and a water tank to effectively portray Nancy's plight. Part antagonist and part metaphor, the shark is well executed for most of the film, despite the production's limited budget, but we do see too much of it in the final third of the film. At that point the shark becomes less of a realistic wild animal protecting its feeding grounds and more of a monster killer familiar from the Jaws films. In the lead role of Nancy, Blake Lively delivers a solid performance, which is just as well because she's on screen for almost the entire film. Ultimately The Shallows delivers on its simple premise, providing both thrills and emotion. The Shallows was filmed digitally using Arri Alexa XT and XT Plus, Red Epic Dragon and, for a few scenes, GoPro Hero 4 Black cameras. As a result the resolution is a combination of 2K, 3.4K and 4K but it was finished using a 2K Digital Intermediate (DI). This 2K DI presumably formed the basis for the Ultra HD Blu-ray release and was then upscaled by Sony Pictures to 4K. The film is presented using a 3840 x 2160p transfer in the film's correct 2.39:1 aspect ratio, the disc uses 10-bit video depth, a Wider Colour Gamut (WCG) and High Dynamic Range (HDR), and is encoded using the HEVC (H.265) codec. We reviewed the Ultra HD Blu-ray release of The Shallows on an LG 55B6 Ultra HD 4K TV with a Samsung UBD-K8500 Ultra HD Blu-ray player.

Although The Shallows was finished at a resolution of 2K and thus shouldn't really have much more detail when compared to the regular Blu-ray, the reality is that it's a superior experience. That's not to say that the Full HD Blu-ray is bad because it's an excellent transfer, it's just that the Ultra HD Blu-ray is superior in every respect. The use of high dynamic range is clearly effective, bringing out every last detail in the image in a way that the Full HD Blu-ray just isn't capable of replicating. Whether it's the skin pores on Blake Lively's face in close-ups, the stitching on her wetsuit, the tangle of her wet hair or the grains of sand that stick to everything, the Ultra HD Blu-ray reveals it all in astonishing detail. Regardless of whether the scenes were shot on location or against green screen in a water tank, the filmmakers effectively create the illusion of Nancy being stuck only a few hundred feet from safety. The lower resolution of the GoPro footage is naturally obvious but it's perfectly acceptable within the context of the film's narrative.

However it's the addition of HDR that really sells the illusion of reality, creating a visceral image that genuinely enhances the viewing experience. There's no doubt that the higher dynamic range gives the image more perceived detail than the regular Blu-ray but it also adds to the realism. The details in the white surf and bright sunny skies are evident, as are the layers within the storm clouds later in the film or the many underwater scenes. The HDR also picks out the specular highlights of reflections on the water very effectively and really gives the impression of actually being in the sea. The effects largely hold up very well to both the resolution and the increased dynamic range but occasionally the budgetary limitations become apparent.

The other area where the Ultra HD Blu-ray really stands out is in terms of the colours, with the wider colour gamut combining with the higher dynamic range to create a wonderfully visceral and realistic experience. The primary colours pop on Nancy's bathing costume but flesh tones are very natural and the colours of the ocean are delivered with saturated greens and blues but also great subtlety. The red of Nancy's blood from a wound on her leg is particularly realistic and a scene where the water itself turns red is highly effective. The transfer is also excellent and thanks to the 10-bit video depth the underwater scenes are free of the banding which can occasionally affect the regular Blu-ray. Since the film was captured digitally the image is pristine and also free of any artefacts. Ultimately The Shallows on Ultra HD Blu-ray is the perfect example of how WCG and HDR can really enhance your viewing experience, even without a native 4K source. The Shallows was released theatrically with a 5.1-channel mix in the Dolby Digital and Datasat formats but for its Ultra HD Blu-ray release, Sony Pictures have created a new Dolby Atmos mix. Only the Ultra HD Blu-ray benefits from this new immersive audio soundtrack, with the regular Blu-ray using a lossless DTS-HD Master Audio 5.1-channel soundtrack that is presumably based on the original theatrical mix. That's a shame because the new Dolby Atmos soundtrack is absolutely fantastic and combines with the stellar visuals to deliver a superb audio/visual experience. We reviewed the Dolby Atmos soundtrack using a Denon AVR-X7200WA AV receiver in a 7.2.4 configuration.

The intimate nature of Nancy's plight really lends itself to an immersive audio soundtrack and the new mix delivers in spades. The sound designers take full advantage of the object-based nature of Dolby Atmos to create a completely realistic sound field. From the opening scenes on the beach you are surrounded in subtle audio cues but once Nancy goes out surfing the soundtrack simply kicks up a gear. As surf crashes around and above Nancy the sounds do the same and in scenes at the surface or under the water the side, rear and overhead channels are used to effectively immerse you in the ocean. The bass is also used to underscore the power of the ocean as well as the shark itself and in some scenes your entire system will get a thorough work-out. Despite the lively (no pun intended) nature of the soundtrack, dialogue remains centred to the screen and the score is effectively mixed across the frontal array and even to the sides at times. Overall this is a superb Dolby Atmos soundtrack that perfectly compliments the already impressive visuals.

The Ultra HD Blu-ray of The Shallows comes in a two disc set with the regular Blu-ray included, on which you'll find all the extras:

Deleted Scenes (HD, 04:46) – These are three short extended scenes, often without completed effects, that remind you how much of the film was shot in a tank against green screen. The scenes are all short and don't really add to the narrative drive, so it's easy to see why the were cut and the tight running time is part of the film's appeal. The three scenes are Chloe sees the shark (HD, 01:30), Call for help (HD, 02:12) and A conversation with a seagull (HD, 01:04).

Shooting in the Shallows (HD, 05:57) – A short featurette that explains how the film was shot and particularly how the filmmakers combined actual location work in Australia with a green screen shoot in a water tank. The filmmakers go to great lengths to make The Shallows as realistic as possible, from building a fake island on location to seamlessly marrying location and green screen shots and overall they are very successful within the limitations of their budget.

When Sharks Attack (HD, 07:34) – This featurette includes an interview with an actual shark attack survivor and also interviews a shark expert who discusses the natural behaviour of sharks. So given all this useful information, it's a shame that the shark gets rather demonised towards the end of the film itself.

How to Build a Shark (HD, 06:34) – This informative featurette shows you how the effects team designed and animated the shark for the film and the thought processes that went into the animal's movements and behaviour.

Finding the Perfect Beach: Lord Howe Island (HD, 06:01) – This short featurette covers the actual location, which was a beautiful but remote island off the coast of Australia. Since the island is within a protected marine reserve, the filmmakers had to be especially careful when shooting there. The Shallows is a fantastic little aquatic thriller that sets up its simple premise and for most of its running time it ratchets up the tension in a very effective manner. A great performance by Blake Lively and some clever filmmaking help to sell the illusion of reality and for much of the film the 'less is more' approach is applied to the shark. Sadly the film overplays its hand in the final act and ends up demonising the shark in traditional fashion but overall it remains a hugely enjoyable 86 minutes that is definitely worth checking out.