Three factions, a world in chaos, and you. 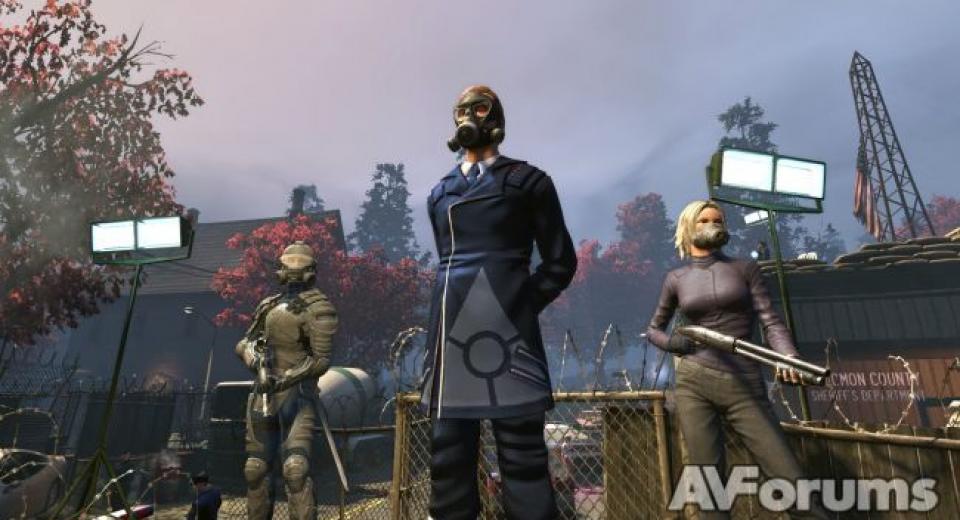 So what makes a good MMO for you? Does it have to be based heavily around player interaction, with a wealth of content and upgrade opportunities that allow individuals to specialise and act as a cog in a well-oiled destructive machine? Is it raiding or building powerful guilds, with groups of like-minded individuals coming together to solve both cerebral and combat-oriented challenges? Maybe it’s the fancy dress and the creation of a unique avatar to show off within the world, or the chance to role play and inhabit a character that - simply put - isn’t you?
What’s interesting about The Secret World is that it gladly eschews most of those principles, and it’s almost universally better off for it. You don’t level up, it’s mostly class-free, and it’s an action-adventure-MMO hybrid with oodles of personality and interesting visual design. It’s also quite happy to let you play through the majority of its content without so much as a lick of interaction with another human being. To do so would be missing some of the charm of course; but soloists should rejoice, this is definitely the formula for you.
As with any other game within the MMO genre, you create your own hero and wander the lands as a semi-unique visual representation, but beware; customisation options in The Secret World are thin on the ground unless you’re willing to fork real-world money out on extra clothes and trinkets. Your identikit appearance isn’t the only strange thing occurring in the universe though, and not by a long shot. Interdimensional rifts are springing up and exotic beasties terrorising the real-life and fantasy locations that set the stage for your adventures, and it’s down to you to uncover the mysterious powers that lay behind a swiftly-crumbling veneer of reality. Well, it’s down to you and several hundred other vaguely familiar agents running around the same locations, anyway. As you might expect from a game with one foot in the supernatural with a conspiracy-driven storyline, The Secret World offers up a choice of competing organisations to pledge allegiance to: The Illuminati (selfish, devious, power-hungry), The Templars (quasi-religious, devious, power-hungry), or The Dragon (chaotic, devious, power-hungry).
Picking from those three is no easy feat, as they’re all - on some level at least - quite abhorrent in their values. Personally, eventually I settled on The Illuminati, as they were at least pragmatic enough to know exactly how base their desire for knowledge and power is, and they kinda just run with it. They know exactly where their moral compass lies, and they don’t fall back on religion or cod-philosophy to justify it. It’s a refreshing approach, but one that sits well within the storyline and universe that Funcom has created.
The introductory area in New York teaches you everything you need to know about the gameplay and combat mechanics, but in comparison to classic MMOs, there’s not a whole lot to learn. Weaponry is broken down into three tiers that roughly correspond to ranged weapons, hand-to-hand combat and magic, and it’s completely up to you as to which one you specialise in. The level-free structure works by allowing you to assign action points in a skill wheel that corresponds to each of these areas (awarded on completion of quests or killing enemies to gain amounts of XP), and also to dole out separate points to a range of static buffs that augment those abilities.
In that respect it’s all quite refreshing. You can burn through the ability upgrades pretty quickly, meaning that a re-spec of your character in the later game is as simple as changing out a weapon set and reassigning your skills. You can (with a small investment of time in MMO terms) flush out the entire skill wheel if you want to. Combat itself is about as satisfying as MMO combat ever gets, with a good range of animations and decent sound effects going a long way towards fleshing out the sensation of contact. Beware though, it boils down to mashing your chosen formula of numbers between 1-7 and occasionally dodging an area of effect attack, with seldom little else to chew on. Once you’re out into the wild however, Funcom’s playful approach to character and faction design takes centre stage. Storyline quests and side quests are frequently set up with some excellent dialogue and small cinematic sequences, and the characters that inhabit each of the zones that comprise The Secret World are genuinely intriguing and certainly a huge cut above those found in other MMO titles. The fact that your character never speaks lends some of the interactions a slightly forced tone, but on the whole, these are people you’ll want to help, in situations that you want to see resolved.
As one might expect from such an attention to character detail then, any quest line that strays away from combat is immediately welcome. Investigatory puzzles frequently pop up to tax your brain as much as your clicking finger, requiring you to scour locations for clues and pop online (via the built-in web browser) to research information with which to solve riddles and challenges. The intertwining of real-life lore and mythology with the game’s own fantasy narrative is excellently achieved, and it lends the universe considerable charm and cohesion - despite the varied locations you’ll find yourself in.
It’s probably worth noting that whilst the majority of those investigatory quests are taxing (pleasingly so), some of them notoriously overstep the line in terms of difficulty (deciphering an audio file of morse code is perhaps the most prominent example). There are always the Funcom forums to turn to for a quick fix, but I’d avoid doing that for as long as possible; they quickly turn to a crutch on which to lean whenever things get tough. Ask other players for hints, scour for clues, try anything before you fall into that routine; it’ll extend the lifespan of every zone to a meaningful degree.
As ever, depending on your preferences, when the game does eventually force you to team up with other players, the experience will be hit and miss according to whomever you’re matched up with to raid or quest. PvP is supported in separate instances, with several semi-permanent game modes that contribute towards bestowing buffs onto each of the in-game factions. It’s nothing to write home about however, and the core game is sufficient that it doesn’t need the distraction.
The beauty of The Secret World was never going to live within those modes or even within the traditional model of guilds (here called cabals) and raids however, but rather it was going to stem from the pen of Funcom’s writers, the ability of their designers to weave that fiction into a compelling world, and their artists’ ability to convey it all in a suitably intriguing fashion. Consider that  task accomplished then, and although there might not be an overwhelming amount of content to keep players coming back in the long-haul, the promise of free new quests every month will hopefully be enough to sustain it for a good period.

If you’re bored of MMO’s, this may well be the one that brings you back into the fold, and if you’ve never played before, there are few better places to start. The Secret World is ambitious in its storytelling and adventure hooks, and for the MMO genre, that's an innovation worth cherishing.