The Sea Inside DVD Review 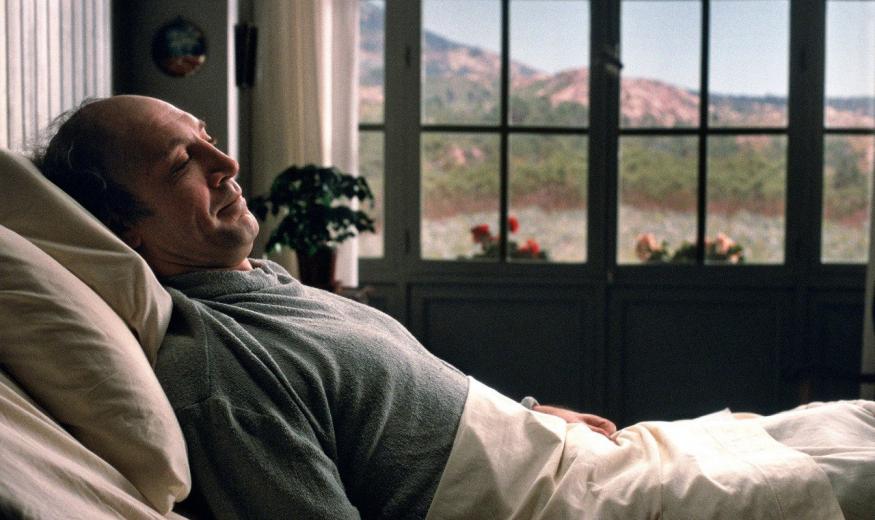 This is an Anamorphic Widescreen 2.35:1 image which is superb. Having watched Melinda and Melinda with its red bias just before watching this, I was refreshed to be reminded what a cinematic picture can look like. The colours were realistic, the sea looking so good, you felt you could dive in yourself. The detail levels were high and the black levels were deep, making this one of the best images I've seen in recent times. I saw no defects from the print or mpeg artefacts - I looked hard for something to complain about, but saw nothing. I was quite surprised to see the average bitrate was 5.47 - I wouldn't have been surprised if it was much higher, the image was that good. The original Spanish 5.1 soundtrack is again, superb. I was surprised to find not only some good use made of the sub (especially during the beach scenes, but very frequent use of the rears - not only for effects, but for the musical score, giving this movie a very involving soundtrack. Not being a Spanish speaker, I relied on the subtitles and here is my only criticism of the disc - the subtitles were too small and not defined enough from the background. On many occasions there were white subtitles on a light backgrounds and it was impossible to make out all the words quickly enough. This was a real shame as the dialogue is very fast in places. This disc contains quite a few extras - there is a feature length commentary from Director Amenebar - in Spanish with English subtitles which cover over the English subtitles from the movie itself. I was sceptical about this, but it actually works well and Amenabar was so involved in every element of this movie that the commentary is full of interesting anecdotes. I actually was able to answer a plot question that I had by revisiting that scene and listening to him explain it - for that it's worth its presence alone in my book!!

There is also an 84 minute documentary “A Trip To The Sea Inside” which puts the usual behind the scenes featurettes to shame. It is effectively a video diary of the whole production process from script writing through to final digital correction of certain shots. I found this to be very interesting and was left thinking that Amenabar must surely be destined for great things having seen how he works and what he can achieve already. Javier Bardem reveals also how he prepared for the role of Ramon, especially the physical side of playing a quadriplegic. Details such as discovering why Ramon spoke the way he did, due to his speech pattern being altered because of the lack of breath he had when lying in the same awkward position for hours on end, all made the character so believable.

Finally there are storyboards, photo and set design galleries and 3 deleted scenes and the English trailer - all in all a nice package of extras This is a powerful, mature piece of story telling and works on so many levels. It never preaches and Amenabar leaves the difficult decisions discussed in this film up to each viewer to decide upon. The presentation of the disc is fantastic, with a great picture, superb sound and a strong set of extras. If you like movies that make you think long after the final credits have rolled, then deserves a place in your collection.