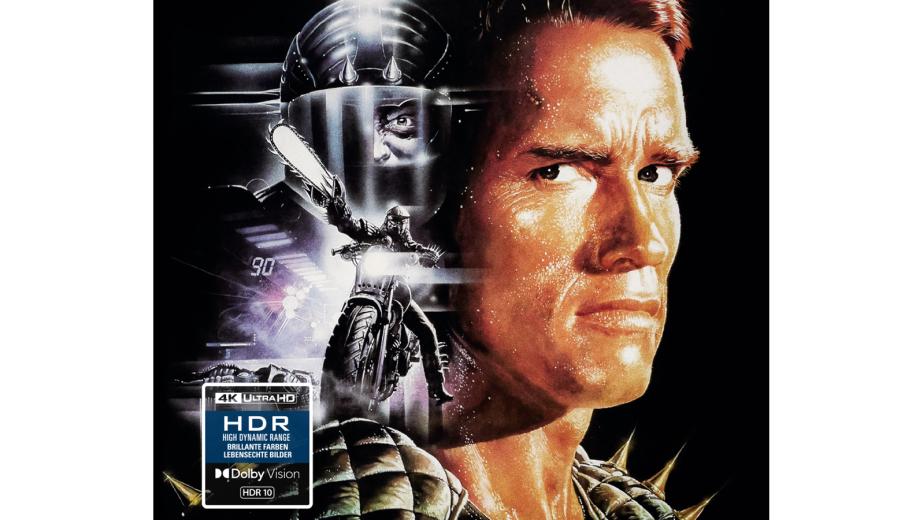 Sure, it might come behind his top tier work in the first two Terminators, Total Recall and Predator, but The Running Man is still peak Schwarzenegger, made smack in the middle of the most successful 10 years of his career.

From '82-'91, Arnie was King of the Action Movie. He released some 15 films, the majority of which were sizeable Box Office successes (yielding almost tenfold returns on the paltry budget of some of these productions), and was an undisputed action titan, doubling down on early success in the likes of Conan and The Terminator with the likes of Predator and The Running Man, dabbling in reluctant partner fare, and outright comedy in Red Heat and Twins, before undertaking a contender for his strongest work in Paul Verhoeven's ambitious Total Recall, and closing out his reign with a tremendous Terminator sequel. It's not like everything went wrong after that - Last Action Hero is a flawed effort way before its time, True Lies a fabulously fun large scale James Cameron spy comedy, and End of Days a fair but also flawed attempt at something a little darker and more horror infused (no excuses for Batman & Robin and Jingle All the Way). Still, there's no denying those 10 golden years yielded his best work, with 1987 yielding a very loose adaptation of Stephen King's The Running Man.

... there have been several far better Arnie flicks, but this was still a good entry smack bang in the middle of the best part of his career

Foolishly but perhaps necessarily ditching the scale of the setting (even Hard Target would handle this better), as well as many of King's darker themes, The Running Man is still a bloody entertaining sci-fi romp, ripe with a 2017 'future'-scape totalitarian backdrop, propaganda, corrupt commercialisation and early reality TV attention, as well as police oppression and resistance movements. Sure, everything from Battle Royale to Hunger Games to Squid Game to Game of Death, to the aforementioned Hard Target covered comparable ground, to greater and lesser degrees, and often more impressively, but Arnie just about pulls it all together with flexing muscles and sheer star power, assisted by a game cast including real-life gameshow host Richard Dawson, Maria Conchita Alonso (Extreme Prejudice, Predator 2), Jesse Ventura (reuniting after Predator), and the original black action stars, Jim Brown and the late, great Yaphet Kotto (Alien). The great extended premise probably could have been better serviced by a more expansive chase element, rather than just a succession of end-of-level baddies for Arnie to best, but there's still some crazy fun to be had in the preposterousness of the villains and their weaponry - an opera singing electric man, a redneck with a chainsaw, an ice-skater with exploding hockey pucks, and a guy with a flamethrower - although arguably the best of all the battles is the faked one with Ventura as Captain Freedom. Yes, there have been several far better Arnie flicks, but this was still a good entry smack bang in the middle of the best part of his career.

The Running Man was shot on 35mm film with Panaflex Cameras, and has been granted a new native 4K master courtesy of Capelight Pictures in Germany (with reference to both Lionsgate and Paramount, and further reports saying it's the same 4K that made it to US iTunes). The 3840 x 2160p resolution image has a theatrical widescreen aspect ratio of 1.78:1 and uses 10-bit video depth, High Dynamic Range in both HDR10 and Dolby Vision flavours and is encoded using the HEVC (H.265) codec.

Capelight's 4K track history has been far from impeccable, and indeed its own Blu-ray release of The Running Man just a couple of years back was reportedly far from well received, but rumour has it there has been some changing of the guard behind the scenes and - if so - then it was certainly for the better because The Running Man has NEVER looked like this, opened up slightly to 1.78:1 (previously cropped at 1.85:1), oozing with detail and handling the grain layer fabulously. There's a warm filmic edge to the image, holding stable almost throughout and certainly never devolving into a shimmering mess, reminding you that the source material has been preserved as best at is possibly could be, picking up on skin textures and imperfections, hair details, background nuances and clothing detailing. Sure, there's a smidge of underlying softness, and it's not relentlessly perfect, but, in motion, few fans are going to be disappointed by what they've done here - on the contrary, they should prepare to be utterly wowed.

Better still, the HDR/DV application is sublime. The Running Man has a surprising number of heavily skewed sequences - the cool blues of the Paula Abdul-choreographed dance intro to the 'games', the bright red and blue banners of the live gameshow event itself, with further yellow/orange/red/blue skews aplenty (each Big Bad appears to come with his own colour preference), and it's actually really amazing that this 4K manages to cope with some of these extremes, avoiding all overt signs of banding, bleeding or crush, with fabulous black levels as a backdrop to the action. Sure, it's a little warmer than fans might remember it, but that's only because the previous releases skewed cool - this is much more natural and still has the capacity to go blue steel when needed, and do it fabulously. The Running Man really has been gifted a new lease of life in 4K.

Although there's no 3D object-oriented HD audio Dolby Atmos track, the accompanying DTS-HD Master Audio 7.1 track - previously available on preceding Blu-ray releases - is pretty damn good, maybe lacking a tiny bit in the LFE department, and hardly aural gangbusters like some of the best out there, but certainly solid enough to get you engaged in the proceedings.

Dialogue is keenly prioritised across the frontal array, Harold Faltermeyer's score remains a core component well presented too (and reminiscent of a number of other 80s classics, albeit more Beverly Hills Cop than Top Gun Faltermeyer), and effects do incorporate a nice little amount of LFE weight, even if the gunshots still sound quintessentially dated. It's a good track, maybe even very good, although an Atmos upgrade wouldn't have gone amiss.

Capelight kindly include a whole host of extra features including a pair of Audio Commentaries, one from director Paul M. Glaser and producer Tim Zinnemann, and one from executive producer Rob Cohen, as well as a pair of Trailers, all of which makes it to the 4K disc itself.

The remastered film Blu-ray contains the same as the 4K, but there's a third disc, a dedicated Blu-ray Bonus disc, which includes a pair of Featurettes, the previous Lockdown on Main Street and Game Theory offerings attempting - not always successfully - to reframe some of The Running Man's themes in a modern light, and a selection of Interviews including with illustrator Renato Casaro on The Art of the Blockbuster, Robert Grasmere on the VFX, screenwriter Steven E. De Souza on working with King's story, Muscular Memories looking at the action film era with writer Susan Jeffords, and a German-only Interview with Faltermeyer presumably discussing his score.

Arnie's 80s/90s classics have really enjoyed a tremendous run of 4K remasters - to greater and lesser degrees, admittedly - from Predator 4K to Red Heat 4K to Total Recall 4K to Terminator 2 4K to Last Action Hero 4K, and it's nice to see The Running Man added to that list.

... little reason to believe anybody could do a better job than this spectacular rendition

Capelight, previously regarded with not wholly unjustified disdain, really have turned a new leaf with this 4K remaster of The Running Man, delivering an absolutely stunning rendition ripe with fabulous detail and gorgeous HDR/DV implementation, in a glorious 3-disc mediabook package with a hefty selection of extras. With no current UK/US 4K announcement on the horizon, and little reason to believe anybody could do a better job than this spectacular rendition, this release comes recommended.

The Running Man was released by Capelight Pictures in late 2021 and is available to import now from all major retailers including Amazon.