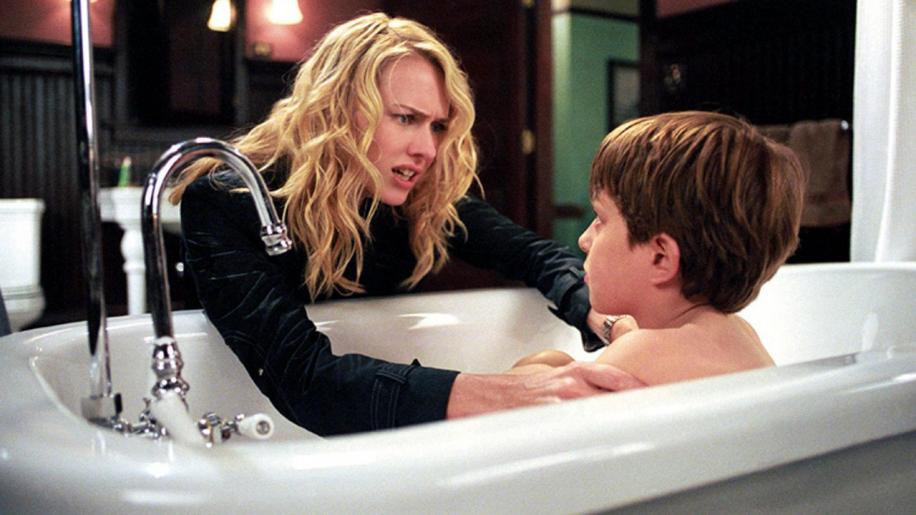 Filmed and presented here in a 1.85:1 anamorphic ratio, the transfer is really good, albeit with a caveat. Grain free and with no signs of artefacts or edge enhancement, the transfer looks good, with colours showing no sign of bleeding and flesh tones looking natural, or supernatural in Samara's case. Black levels are superb, being dark as well as suitably moody, particularly during the night time scene at the police station, which is also dark-ish to match the time of day. Detail levels in general are high, but the only issue with the transfer is that there's occasionally some dust specks that show up and at times they are quite noticeable, which is a shame. Other than that, it's not reference material quite, but very nice all the same. With a 5.1 soundtrack, I have to say I found this disappointing. Although the ambience level from the rears is well done and dialogue is crisp, I did think that this would be busier sound wise, or more like the Japanese movie Ju-On, which was aggressive and highly atmospheric. Maybe I'm being too critical, but even the stingers didn't have the right weight behind them to give the necessary “oomph” to make me jump without making the dialogue over-powering. LFE does become very apparent during certain scenes, which require it and gives a nice air of menace to the soundtrack, which is a shame as the movie never pulls it off. Generally it's a fine soundtrack, but it's not quite as effective as it could or should be. Starting with the “Rings” mini-movie, I would recommend you watch this first, as it sets the opening scene for the main feature up nicely. It revolves around school kids whom watch the tap and pass it on before the 7 days elapses, but they document all the things they see. Our main character here gets to day 7 with only a short time to spare before his time expires. This is actually better chills-wise than the main feature, even more shocking when the director of this was responsible for “Darkness Falls”. Imagination in Focus is a 2 minute featurette which is a brief PR fluff piece of how influential and “amazing” Hideo Nakata is within this genre. Samara: From Eye to Icon is another 2 minute PR fluff piece relating to the creation of Samara, mostly from a makeup perspective. The Haunting of The Ring 2 is yet another 2 minute featurette, relating to the widely-reported spooky goings on while filming this movie. *Cough*Hype*Cough*.

HBO First Look The Making Of Ring 2 is a 13 minute featurette and contains some of the footage from the previous featurettes (so lazy to repeat extras). It's very much a typical promo that you'd see on Sky between movies to hype it up. It's not really revealing and everyone seems to think this is an impressive movie, but that's typical for the most part. Deleted and Alternate Scenes lasts for 10 minutes and is a reel of, uncannily, deleted and alternate scenes, which for my money make sense to have been cut but then as it's not gripping stuff to begin with, doesn't say much. Finally we have trailers for “Red Eye”, the Wes Craven movie and “The Ring” which makes no sense as you've probably seen or got it if you are watching this. Hollywood strikes again, not only producing a lacklustre sequel but dragging down the director of the original Japanese movies with this travesty. Sure, there are worse movies, but it's still not going to detract from the fact that this is a total let down. There were so many more ways that they could have gone, heck even more of the same thing from the first movie with different main characters would have been better. Yet again, stick to original Hollywood release, or better yet, get the original Ringu trilogy.