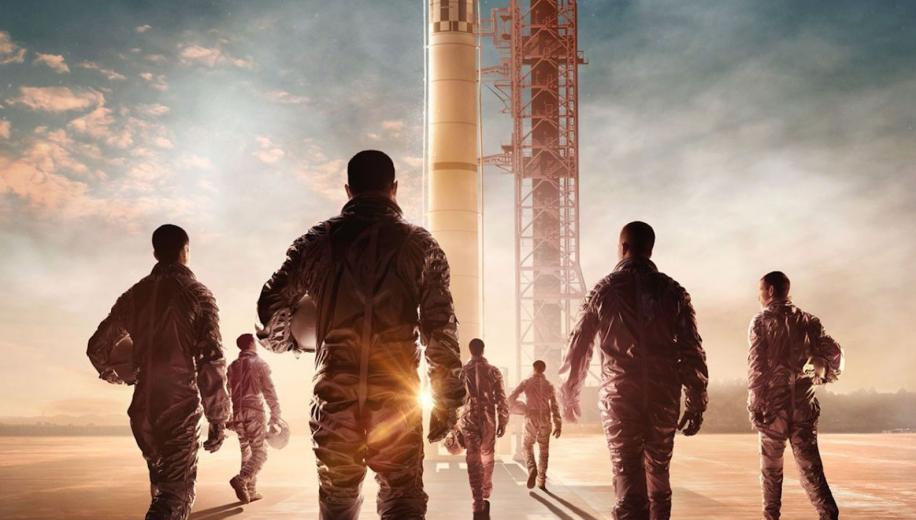 More Mad Men-lite than For All Mankind, Disney+'s first and only non-Star Wars series of note - courtesy of National Geographic - is a visually lavish period piece embalmed in rousing, patriotic chords, but it feels like it may be a long ride with little new or interesting to add.

Journalist and author Tom Wolfe undertook his 1979 novel - The Right Stuff - in a bid to offer commentary on the mentality of the men that were prepared to make that very first trip into space, affording a treatise on what he regarded as the notion of the 'single combat warrior', with each American astronaut a solo entity, juxtaposing this with the team-style construction of their Russian cosmonaut counterparts, and further with the legendary pilot Chuck Yeager, whose lack of college degree left him in the cold when it came to selecting the supposed Best of the Best for space. He regarded the original Mercury Seven astronauts as a product of publicity as much as anything else, born from the desperate need to definitively win the space race; celebrated in the media and idolised by the public long before their feet ever left the ground.

The book was adapted in 1983, at a time when it was seen necessary to highlight the more patriotic elements and possibly downplay anything critical of individuals at the heart of the project, resulting in a now-revered all-star 3-hour epic that followed the Mercury Seven through the key points in their decades-long journey. In 2020, revisiting The Right Stuff, National Geographic's production appears content to play it largely safe - Disney-style - and fashion merely an updating of the 80s feature, stretched out over a protracted 8-episode run.

The story sees the soon-to-be Mercury Seven recruited with some urgency, as the Russians sprint around the track towards space flight, and turned into celebrities almost overnight; a new position that leaves them and their families under the spotlight with their every move. All unsurprisingly confident, but some more outspoken than others, they will still have to prove they truly are the best of the best if they hope to ever make it into space.

Glossy and immaculately produced, The Right Stuff is gorgeous - particularly in Dolby Vision (notwithstanding a single odd bar-room scene where the lighting and/or HDR exacerbates the heavy makeup and appears to make Alan look like he's been on a sunbed wearing googles), and immediately takes you back to that carefree post-war, pre-Vietnam period in time when pretty-much all America cared about was beating the Russians into space. It's got that Mad Men feel right from the get-go, with a slew of suit-and-sunglass-wearing mens' men being men because, well, they're men. Almost impossible to differentiate (almost all of the main characters look like they have a twin amongst their own), but for minor tweaks in attitude, they don't just want to beat the Russians, they want to beat each other, with Alan alone proclaiming that he doesn't care about being one of the Mercury "Seven", he's going to be the first man in space. Full stop.

Immediately there is opportunity here to take a deep dive into what makes these men tick. What makes them want to be better than everybody else - even those alongside them, and even at the expense of those in their own team. To figure out why they're prepared to die so readily or, more accurately, prepared to risk their lives so readily. One of the first things that they are told on recruitment is that basically they are going to be strapped to a nuclear missile in place of the nuke, and fired into space. That this generates almost universal laughter is something worth noting and worth considering - how many people would actually be happy with being placed in that position when it comes down to it.

The Right Stuff, at least insofar as the first two introductory episodes are concerned, barely skips across the surface of these personalities, actually more content to focus on formulaic melodrama back home and, even then, playing it very safe indeed. It's particularly jarring coming after the excellent Apple TV+ series For All Mankind, which covered many of the same themes, and not only did them far better, but afforded some insight into these characters, personalities and their families. By contrasting itself with the truth, and deviating, For All Mankind was innovative and compelling.

National Geographic have 'the truth' on their side, but don't take any risks with it, playing out a stylish but superficial docudrama which simply gives us no new insight. This is clearly a hot period in history at the moment, after First Man and the real footage of Apollo 11 - and For All Mankind - but The Right Stuff needs to go further if it wants to sustain such a protracted episodic duration, with the daunting promise of 'future seasons carrying us through to the moon landing' leaving audiences aware that their fate is going to be watching these glossy, seemingly perfected individuals for a long time to come, with not a huge amount happening along the way, and certainly nothing most will not already be pretty aware of.