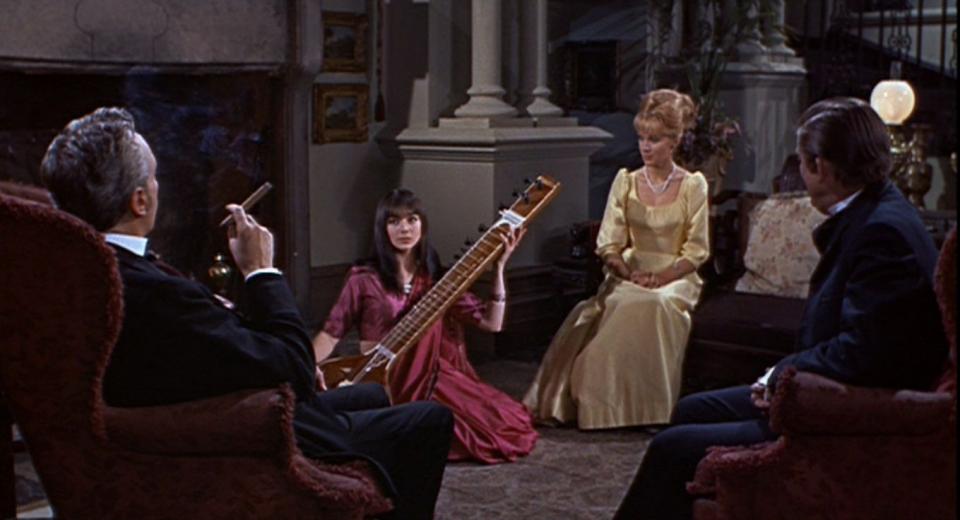 The titles and opening shot of Charles Spaulding crossing the heather and gorse-flanked path to the cottage is terrible. It is soft, stricken with vertical lines and suffering from ill-defined contrast. It is not, however, typical of the rest of the restored AVC transfer of The Reptile which, on the whole, is quite impressive.

DNR doesn’t blight this 1.66:1 image. Grain is there for all to see, and it looks fine and film-like for the most part. You’ll notice it more acutely in the darker portions of the picture, but it manages to refrain from clumping. Banding is not apparent and there is no bothersome edge-enhancement. The black levels aren’t spectacular, but they hold their own against an image that can seem a little too highly contrasted. Shadow-play isn’t, therefore, exacting, though it still provides some dangerous pockets of darkness in the interiors. The day for night shooting, as with Plague of the Zombies, is absolutely woeful, but this is part and parcel of the Hammer aesthetic and Studiocanal have not mucked around with the timing to make it any more realistic. Sunlight clearly streams across the graveyard as the two heroic tomb-defilers go about their surreptitious business under the apparent cover of darkness, the rain-machine not managing to convince us that the downpour stretches more than a couple of feet into the set either. All part of the charm of Hammer, of course.

I found the colours to be rather more muted on this release than on many others from the studio, except for the typically garish primaries – green and red in particular, that are nicely saturated. But this has been the case with every version that I have seen of the film. Thus, The Reptile doesn’t seem to fare as well as many other Hammer offerings in terms of lurid colour palette, the aesthetic a little paler and earthier as far as I’m concerned. The transfer doesn’t mess around with this by boosting the hues in any glaringly miscalculated manner. Little elements such as the checked quilt and the red carpeting on the stairs of the cottage stand out, and the crimson-jacketed tomes on Dr. Franklyn’s desk, and the ghoulish green/black mottling of victims’ faces gets a dubiously welcome lift courtesy of the restored print. But even if the green of the serpent, itself, looks a little dark, it is the appearance of Jacqueline Pearce’s radiant Anna that steals the show, especially in that provocative red sari and sitting there in front of the fire and sensuously playing the sitar. Suddenly the image comes alive with the bright scarlet of her dress and the ruby red of her lips. There is a hint of midnight blue at play, especially as we venture down into the sulphur pit, but this is rather faded and not as moody as we would like. Skin-tones are variable and mostly pallid, but for some reason Michael Ripper’s face looks very natural and realistic. Eyes have some delicacy to them, with John Laurie’s, Ripper’s and Jennifer Daniel’s standing out quite splendidly during close-ups, but, once again, you only have to look at Pearce to see how well they ignite the screen.

Although it might not be immediately apparent, this is quite a well defined image. Little details do occasionally come to light. Look at the little beetle that suddenly crawls over Ray Barrett’s shoulder after he has the scuffle with John Laurie out on the country lane. The patterns on the cups and saucers in the cottage, the whiskers on Mad Peter’s face and upon Tom Bailey’s chin. Book jackets, the strings on the sitar, the weave on clothes and furnishings, the pearl necklace on Valerie and the exotic jewels on Anna, and the gravel on the path are certainly given more clarity and definition than we’ve seen before on home video. Mid-shots and backgrounds might not fare as well, although trees and buildings are still pretty distinctly rendered, but there are some extremely good close-ups that yield much to scrutinise, and really show how well this print has been cared-for.

Even beyond the poor-looking opening shots, there is still some damage on show, but it is slight and not at all distracting. I did notice that the frame-wobbles are still there, however.

The Reptile isn’t the most visually striking film in Hammer’s canon, but, on the whole, this hi-def transfer gives it a new lease of life. Overall, this is a very worthy upgrade. To fresh ears, the LPCM 2.0 track provided for The Reptile will probably be considered rather disappointing by some, I suppose. But this is a pretty faithful presentation that doesn’t crackle or hiss (although the latter may have been quite appropriate, if you think about it) and doesn’t commit that audio-synch error that caused controversy with the label’s first release batch of Dracula Prince of Darkness. The overall quality is pretty good, even for such a limited mix, with dialogue managing to refrain from sounding limp and effects carrying some degree of bite.

There is a pleasing depth and clarity to Don Banks’ evocative, Eastern-flavoured score, which is very welcome. You can clearly appreciate the xylophone and the shivering strings, the gamelan and the flute in his suspenseful orchestrations. When we hear the mystical serpent-calling flute that the Malay plays, this does sound quite nicely wafting and sonorous, emanating from off-camera, but creating a nice sense of wind-borne dislocation and mystery.

Yes, there are lots of those click-clacking footsteps going on - I love that curiously 60’s sound, it’s pure Hammer crossed with vintage James Bond – and these come across with reasonable clarity and movement. The sitar playing during Anna’s bravura recital is actually very well presented, with a warmth and clarity that is commendable and a sure-fire vigour once things get a little steamier.

Other elements also come over well. The rain outside can still be heard when the scene shifts to the interior of the pub. The crackling of the fire and the snuffling and scraping noises outside the Spalding cottage of Larkrise when poor Valerie is left alone there have a mild sense of positioning within the mix. When Dr. Franklyn seizes the sitar and shatters it against the wall, the resulting crash is unavoidably limited but there is still some detail and separation to be gleaned within the splintering.

I would have liked a little bit more atmospheric distinction from the bubbling sulphur pool but this would have entailed unnecessary meddling, so that’s just a personal thing and not a complaint. As it stands, The Reptile doesn’t strive to achieve too much in the audio department, but what it delivers, it delivers with pleasing gusto and without sounding forced or too brittle, or manipulated. So, once again, this is low budget vintage material that’s wears its age proudly upon its sleeve, yet still seems to enjoy its new lossless breadth. Don’t expect too much and this modest mix will amply reward. A now familiar set of supplements slide alongside The Reptile.

Forgetting the really rather rubbish World of Hammer episode, entitled Wicked Woman, we can sit back and savour a nice little retrospective making-of that ropes in the usual Hammer mouthpieces of Marcus Hearn, Jonathan Rigby and Mark Gatiss, who each provide production trivia, critical overview and enthusiastic opinion. Called The Serpent’s Tale, this also seesDavid Huckvale return to discuss the film’s musical score, this time composed by Don Banks and not the great James Bernard. Wayne Kinsey talks about the use of the different stages at Bray Studios and art director Don Mingaye recalls the design of the film and his relationship with director Gilling. The makeup is mentioned, as are the locations and the sets, the cast, with particular deference to Pearce and Willman, and the ambitious quality of the four-picture deal. The feature is then rounded-off with a look at the restorative process that The Reptile went through.

What is missing from this look-back at the film, though, is the presence of Jacqueline Pearce, herself. This is quite odd considering that a fair few of the same bunch of participants were recorded for the previous two Hammer BDs during what were obviously the same sessions – so why isn’t Pearce around for this one, since she added her recollections to the Plague featurette? I love the woman, so obviously I’m gutted about her omission, but it still seems a little bit strange that she is not involved other than in some production and publicity stills.

There is also the film’s Theatrical Trailer and one of those gimmicky Restoration Comparison features that seeks to show us, via wipes and split-screen, a before-and-after appreciation of how the film has been scrubbed-up. Once again, as witrh the previous Hammer BDs from StudioCanal, this looks quite bogus to me, having never once seen The Reptile looking as washed-out and anaemic as this “before” elements seem to be.

So, this is certainly worth the effort for the twenty-minute making of, but I would love to hear the thoughts of some aficionados, historians, critics and surviving cast and crew in a commentary track. The Reptile may be far from top tier Hammer, but John Gilling’s atmospheric creature-feature has a lot going for it. Superb performances from Jacqueline Pearce, Noel Willman and Michael Ripper, given one the his detailed characters to portray for the studio, and some decidedly creepy moments keep up the suspense. But, as with its sister production of The Plague of the Zombies, it is the themes found between the lines in which it’s true worth is to be found. Hammer was unwittingly chronicling a quiet invasion of good old England, cunningly eroding the upper classes and seeding a threat to our social values that was as cleverly subversive as it was flamboyantly fiendish. The snake as metaphor for indoctrinated terror-recruits culled from our own heartlands? Well, it's a suggestive thought for sure.

It may be considered one of the studio’s lesser ventures, but there is possibly more food for thought here than in a dozen Draculas. John Gilling would only make one more feature film for Hammer after this, 1967’s The Mummy’s Shroud, but with The Reptile and Plague of the Zombies he ensured a classic legacy within their rich oeuvre that is possibly more insidiously potent and fan-cherished than many of the more widely acclaimed offerings.

Another great restoration scrubs-up Hammer’s rural terrors and even if the image falls slightly short of that of Plague (and a long, long way from the majesty of Quatermass and the Pit), you will definitely see the improvements made over every other home video incarnation that the film has received. Extras-wise, we are in safe hands with the marvellous retrospective making-of but, once again, I feel a trick has been missed with the lack of a commentary track. Nevertheless, this is another Blu-ray that Hammer-fans should not hesitate in picking up.