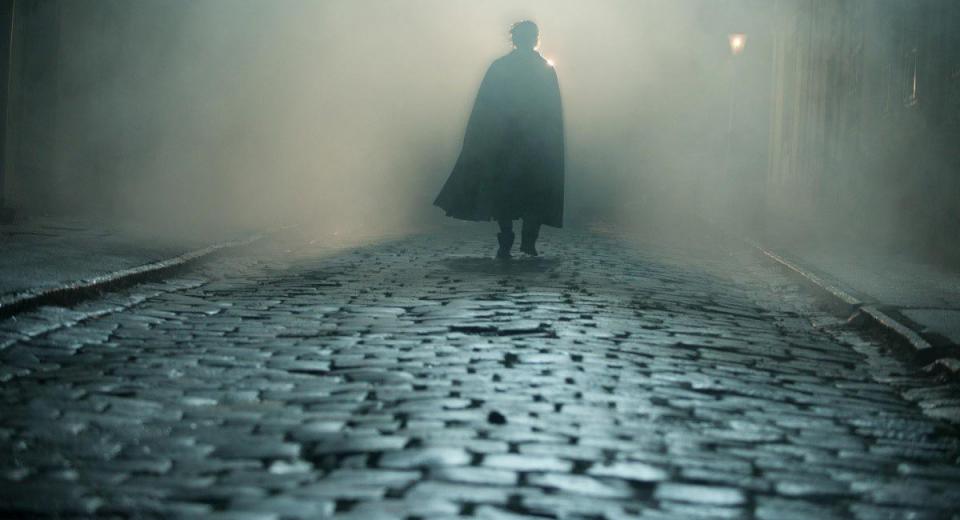 I’m not too fussed on this image, to be honest. I can’t quite tell if it is entirely the transfer that is at fault or whether the problems also lie with the original style and intent that McTeigue and DOP Danny Ruhlmann had for the film, itself. I did not see the film theatrically, so I cannot say much either way about that comparison but, basically, this 2.35:1 image, which is encoded via AVC, looks soft, diffuse and hazy … and not in the least the way that you would expect a hi-def release of a very recent movie to look.

For those of you who dislike the teal look, this is one to avoid like the plague. The aesthetic smothers the image with blue appeal, which combined with pretty poor contrast during the more exterior scenes, conspires to derail all important shadow-play of strength and integrity, lending the image an unfortunately soft and frequently hazy appearance. I should point out, here, that the actual black levels can be quite good at times, with solid darkness and an authentic heft when cut through by lanterns or pockets of fire. But there are altogether too many shots that look as though a smeary veil has been drawn over them.

Grain is present, but it is not consistent, and it doesn’t look quite right to me. For instance, when the actual title of the film appears, the image loses the texture completely, becoming very clean and smooth, and then it returns to the vaguely grainy appearance of before. As I’ve said, some of this can even look quite smeary at times.

Colours do not tip the scales by popping out from the gauzy, bruised veneer, and tend to remain dull and insipid. The CG elements stand out a mile during the pendulum killing, but at least the gore in this scene looks appreciably bright and splashy. Cut to Poe studying a human heart – as you do – and the colours become drained and anaemic. Skin-tones are insipid, and the masked ball, surely a time for riotous colour and dazzling visual artistry, is awash with blandness. We have plenty of fires and warm touches to the picture, but these are merely blobby, unresolved orange glares that offer a glowing contrast, yes, but possess no inner vitality. Greens are flat and dull.

There are details on offer within this transfer. We can peruse some wounds, for instance, and the maps and charts that Captain Hamilton pores over with his sextant, and there is sometimes facial texture on offer too. But this detail is also inconsistent. Books and bric-a-brac in the press office or the studies of the various learned gentlemen sort of fade into the background with no opportunity to inspect them. The trees in the hills that surround the cemetery have no integrity, yet there can still be some definition to the leaves on the ground. Some close-ups of faces can be quite striking and crisply rendered. But this is a soft-looking film with a dreary palette that never comes to life. There is a huge difference between the deliberate shadow and veil in this and, say, Peter Hyams’ Outland, which looks excellent on Blu-ray. Both luxuriate in the darkness, but require pockets of important illumination to punctuate the atmospheric shadows. Outland has depth and clarity and strong colours that fight back naturalistically against the surrounding gloom. The Raven is merely drab, faded and lacking in visual integrity all round. It strives for the look pf From Hell but misses the mark with considerably less vigour and intensity.

And worse is yet to come. There is banding in those awful misty elements which can give the image a poor and very fake-looking digital aspect, and there is aliasing taking place – most notably when Det. Fields leaps down from a police carriage and when Poe sprints around the church - which you really shouldn’t be getting with a release like this. Or any release, to be quite frank. But you can’t help thinking that Universal simply didn’t care about this movie and just rushed it out onto Blu without spending much time checking it over. Universal needn’t have bothered with the full 5.1 mix for this DTS-HD MA track as, in spite of copious sequences that could have benefitted from atmospheric surround, the sonics on offer here are predominantly focussed across the frontal array. What little effects are thrown out to the rears are usually merely bleed-through and ambience, and don’t boast anything of particular note or value even when some specific elements are given surround support.

I had no problem with the dialogue, which came across clearly, though not too forcefully, I should add. With lots of characters shouting at one another and snarling threats or reciting prose, the vocals can still seem a tad restrained. Pleasingly, Lukas Vidal’s ominous score has some fine moments in which to swirl and pound, with clarity afforded the strings and the bass. And there is some appreciable bombast to enjoy from the helter-skelter tale. We have some gunshots and impacts – such as the breaking down of bricked-up walls, the punching through, Kill Bill-style, of a coffin-lid and the thundering of horse’s hooves. The big bladed pendulum has a delicious metallic sweep to it, and this certainly is effective with a wide stereo frontage. There are also instances when glasses are hurled off to the side somewhere, or footsteps clatter around, and these elements are nicely picked out by the front left and right channels.

The instrumentalists performing at the ball and the general ambience of the society bash have some warmth and presence, and overall depth isn’t too bad. But the soundscape does seem to cry out for a more immersive quality. There is an echo to the voices down in the catacombs, but you really shouldn’t have to be listening-out for it in the first place. Nor the thwipp of bullets zooming out of the trees.

The track may not be all that demonstrative, but it still makes time for little details such as the turning of the lock in the door as the police arrive at the scene of the first crime, the scuffling of dirt cascading in through the hole in the coffin, the jumble of confused voices in the theatre or down in the tunnels, the snipping of the thread holding a corpse’s mouth shut, and the crackle of the house-blaze.

Although limited in scope and sounding perhaps a little damped-down even further, this isn’t a bad track … more a reflection of a mix that didn’t have much imagination put into it. I think more could have been done with the surrounds and that the action could have been energised a touch, especially given the type of film that this is, but then that is down to the original sound design. Still, you won’t be all that impressed with what is on offer here. There’s not much to be found here.

Director James McTeigue is joined by producers Marc D. Evans, Trevor Macey and Aaron Ryder, and together they give us a light-hearted discourse on the production in a decent Commentary Track that plays up some of the real life and times of Edgar Allan Poe as sieved through the fictional screenplay from Livingstone and Shakespeare – ye gods, that makes it sound like an absolute classic, doesn’t it? They clears up a few points about the technical aspects of the shoot – with lots about the Serbian or Bulgarian locations and the sets, the international crew and the FX – and there is praise for the performances of the cast. There is also an amusing anecdote revolving around the prop of the nautical sextant – apparently the Ukrainian assistant thought that a “sex” tent was required and, after nervously asking around, came back and politely enquired just how big a tent was needed.

And we get some Extended and Deleted Scenes that only succeed in padding-out elements that we don’t really want to see get padded-out. There are plenty of times when the film seems abruptly or clumsily edited, but there is no evidence of those moments getting a smoother deal here. The Raven so wants to be Guy Ritchie’s Sherlock Holmes that you can almost taste the envy exuded from the screen. John Cusack, to be fair to what has been a character written as being quirky and annoying, isn’t all that shabby as the eccentric, impulsive, obsessive, irascible Holmes, erm, Poe, and he does bring a certain amount of nervous energy to the role …but his alcoholic egotist is so clearly modelled upon Robert Downy Jnr.’s depiction of the great detective that it does sometimes seem like you’re watching some alternate adventure for the Victorian Baker Street sleuth. With an X-Factor contestant doing the impersonation. Where he comes unstuck is with the emotional side of the character, but then again when he is supposedly pledging his undying love for the utterly atrocious Alice Eve this discrepancy becomes a little more understandable.

The plot is a formulaic affair that doesn’t really offer any surprises and possibly bungles what few of them we do get. As a result, McTeigue’s film tumbles along, losing sense, fluidity and momentum with a few awkward turns of events and ultimately dovetails into a tragic twist that you may struggle to care about at the end of the day. McTeigue really doesn’t know how to handle the material.

It’s a period Se7en meets Conan Doyle with Poe’s last mysterious days acting as merely a convenient patsy. But you know what … I still found myself sort of “entertained” by it, even if only to watch its maker bravely (or stubbornly) take a number of bull-headed wrong turns whilst pretending that he knows what he is doing. Unsurprisingly, the film limped across cinema screens without finding much of an audience … and it is difficult to believe that it will gain much of one now it has arrived on home video. The disc is poorly stocked and the transfer is soft, unrewarding and problematic. The audio is perfunctory, and nothing more. Somehow, I doubt that Edgar Allan Poe would actually approve ... and you really don’t want him cursing you from beyond the grave.

If your taste in gothic whodunits is undemanding and you lower your expectations quite a bit, you may still find this a satisfactory gaslight romp. Otherwise, try to keep that Poe-face and steer well clear!