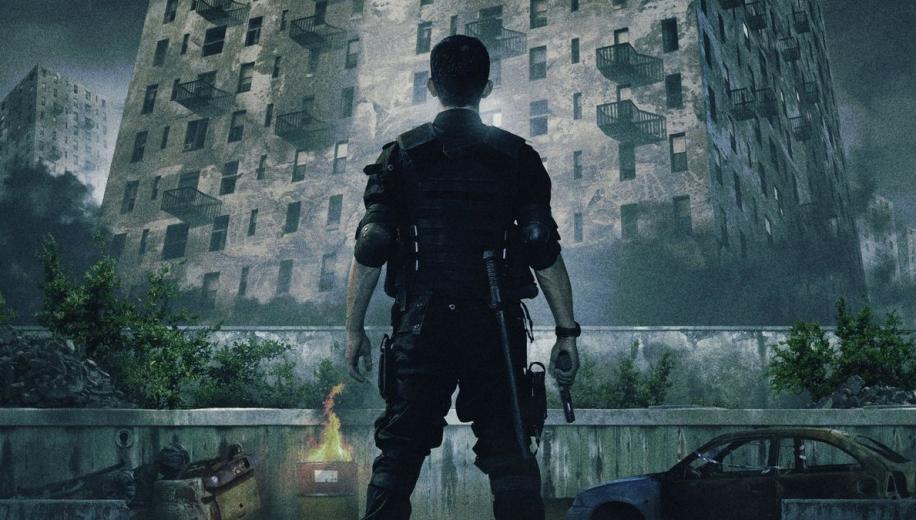 The Raid comes to UK Region Free Blu-ray complete with a 1080p video presentation in the movie’s original HD-shot aspect ratio of 1.78:1 widescreen. Let’s get this out of the way – the movie looks terrible. It’s shot through with noise and digital issues; heavyweight DNR and banding further exacerbate the situation, with skin textures particularly suffering from that terrible pasty look that those familiar with the Predator Blu-ray will know well. The colour scheme is dour and not in the least bit realistic, everything biased in the direction of greens and blues and even yellows, with skin tones looking particularly unhealthy, but that’s the way in was meant to be. Although I remember the colours looking like this, I can’t honestly remember the rest of the film looking this bad at the cinema but, then again, I’m not sure I was particularly paying attention to skin textures or noise – I was too busy watching people getting their faces kicked off – it’s only when it comes to reviewing the video that you come up against this particular brick wall.

So, whilst the fact is that this is a terrible-looking Blu-ray of a very cheaply made film, it doesn’t actually have any bearing on your enjoyment of the movie. It’s just not that kind of movie. In fact there is an argument that all the issues – in particular the noise – only adds to the gritty feel to this production, which was clearly never intended to look like a glamorous, stylish, picture-perfect film at any stage. So the bottom line is: you’ll never use this as demo material for your TV but you’ll likely still show it off to your friends as demo quality material in respect of being the best action movie of the year, and none of them are likely to notice that there’s anything wrong with the presentation whatsoever. They’ll probably just subconsciously put it down to style, and leave it at that. So don’t be put off by the disappointing video, it won’t affect the pleasure you take from viewing this kick-ass movie. The aural accompaniment is not the most spectacular offering either, but it is an energetic, atmospheric and frequently ground-pounding mix that more than does the job for this hit-first-ask-questions-later movie. The DTS-HD Master Audio 5.1 track comes in two flavours – the original Indonesian language version and the horrendous, dubbed English alternative. It’s a no-brainer. Indeed it’s only a shame that we don’t get the Indonesian score option too to play with. Dialogue comes across clearly and coherently, largely emanating from across the frontal array, although there is a degree of separation as shouts and cries occur across the floors.

Effects are myriad – from the rattle of suppressed full-auto gunfire to the thunder of shotgun blasts – but the majority come from the fists and feet of fury that pounding their way through the proceedings. Reportedly founded on full-contact fight sequences, there are some truly vicious blows and, if anything will get to you first, it’s the repeatedly body blows and ensuing shouts of anguish. The score – even Shinoda’s offering, which repeatedly borrows from the Indonesian original – is generally fairly non-intrusive, so much so that you actually wonder whether it couldn’t have been more engaging. Still, there are some nice touches which spill out across the array, and even incite some LFE elements to come into play. This isn’t a fantastic, all-encompassing aural accompaniment, but it’s still a fairly decent audio track which does well with the material on offer. Matching up to the US release in all but the alternative soundtrack option (for the US release), and the UK-exclusive extra audio commentary, The Raid comes to UK Blu-ray with a fair selection of extras, most of which are well worth your time and all of which are presented in 1080p HD.

Audio Commentary with Writer/Director Gareth Evans is a welcome listen, offering up plenty of background information and giving us lots of insight into how this – and several of his previous Indonesian productions – came into existence. He explains his interest in the culture and the rather unusual, untapped martial arts which is the focal point of his features. Specifically in respect of The Raid we get to hear about the filming process, the budgetary restrictions and how they worked around them using fairly innovative techniques; the regular cast he has worked with before and the new additions; the specific location; the different scores required for different audiences and the massive impact which saw the film being re-released in Indonesia.

Accessible by shifting through the language options on the disc during playback, UK audiences have the option to listen to a second commentary track with Writer/Director Gareth Evans as well.

Video Blogs offer us further insight into the production, each running for 6-7 minutes in length. The diaries are split into 6 separate sections titled Bootcamp; Set Location, Camera & Lighting, Make Up & Visual Effects, Riot Van; Courtyard, Hole Drop; Drug Lab, Tama’s Office; Machete Gang & Corridor, Jaka vs. Mad Dog; Post Production. In amidst these we get a look at the training and physical preparation for the fight sequences and weapons handling, the fight choreography and specific martial arts style, and the way in which they put together several of the key scenes, often using simple but effective techniques to get around the restrictive budget.

An Evening with Gareth Evans, Mike Shinoda and Joe Trapanese runs at 40 minutes in length and is presented as a hosted roundtable discussion between the writer/director and the composers, chatting about the movie, whilst also relating some behind the scenes information, titbits and trivia about the production, and notes on the score commissioned for the West and the subsequent success of the film.

In Conversation with Gareth Evans and Mike Shinoda has the director pair up with the composer to talk on four different subjects, each for 2-4 minutes: Hard Shoot; Score; Stunts; and Themes, all of which are fairly self-explanatory.

Anatomy of a Scene with Gareth Evans is a brief 2-minute Featurette looking at the key ‘hole drop’ scene during the film, whilst also reflecting on the super-fast editing style of his movies.

Behind the Music with Mike Shinoda and Joe Trapanese is 11 minutes long and has the two composers talking about their work on the Western soundtrack, the original score that had been done, and the style they adopted for their version.

Inside the Score is a further mini-Featurette running at less than 90 seconds and promoting the score using interview snippets praising it, and a background of the score set to scenes from the film.

The Raid TV Show ad is a 45-second 1991-style promotion for the project.

Claycat’s The Raid is arguably the best extra on the disc, a 3 minute addition that, if you haven’t yet seen on YouTube, should be your first port of call after you’ve watched the movie. Basically summing up the film in a much shorter period, it’s surprisingly just as violent, and the nods to specific characters are awesome. For those who don’t have any idea what Claycat do, the clue is in their name: this is an abbreviated version of the film animated using cats made out of clay. Fantastic.

The disc is rounded off by the theatrical trailer for the main movie as well as a selection of previews. Relentlessly intense, The Raid will blow you away and leave you utterly shell-shocked, the adrenaline still running through your veins long after the credits have rolled, making you feel like a battle-weary veteran, exhilarated and exhausted beyond all expectations. It’s awesome, awe-inspiring, jaw-dropping – one of the best pure action movies ever made – a genuine game-changer. And it comes highly recommended.

On Region B-locked UK Blu-ray we get a slightly different package to the US, disappointingly losing the option to watch the film with the original Indonesian score but having instead the rather unremarkable option to watch the ‘uncut’ version as well as the Theatrical Version (the US release only sports the former), which makes little odds when the differences are so negligible that you’d be hard-pushed to spot a single one of the extra 10 seconds. Still, we do get a UK-exclusive Commentary to supplant the ported-over extras, which are already worth delving into, and with decent enough audio, the pretty average video is going to be the last thing on your mind as you’re watching this ground-pounding action-fest. Love action movies? See The Raid.