The Quiet Ones Movie Review 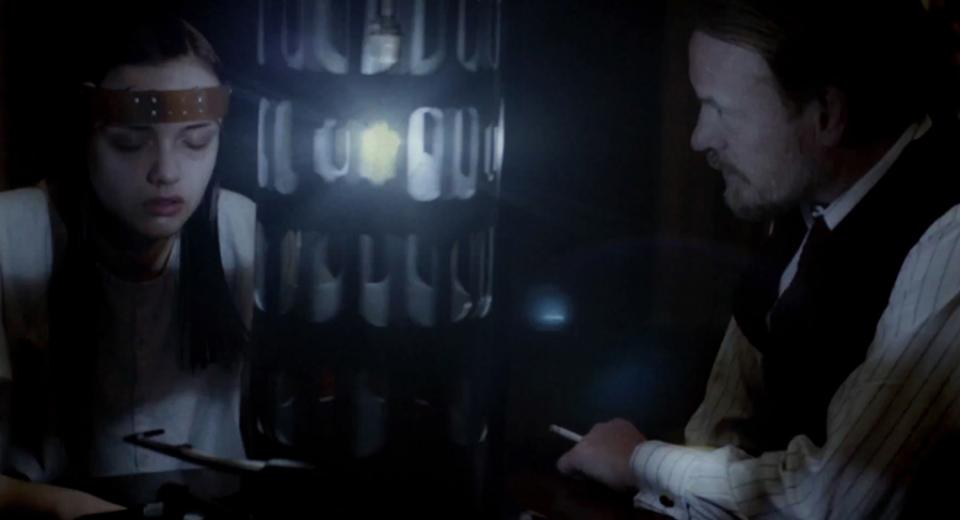 Whilst not strictly the same company, what horror fan didn't rejoice at the return of Hammer Films with the release of The Woman in Black in 2012?

What was even better was that the film in question was a genuinely effective horror film that used old-school techniques to scare its audience. You only have to look at the number of complaints the BBFC received about the film's rating to see how successful it was in traumatising the legions of Harry Potter fans that turned up to see Daniel Radcliffe. So, with its period setting - the 1970s this time - and its plot centred around poltergeists, The Quiet Ones had all the makings of another scare-filled evening at the cinema. Sadly this didn't prove to be the case.
First of all the film purports to be based on a true story which, aside from the fact that there's no such thing as ghosts so it obviously can't be, has been used in so many horror films recently that it's become somewhat cliched. However, we can forgive dubious marketing scams if the film delivers in the important area of scaring the life out of us. Unfortunately the makers of The Quiet Ones seem to confuse genuine fear with loud bangs and should really re-watch Robert Wise's The Haunting - a film they blatantly 'borrow' from - to see how its should really be done. In fact the film should really be called The Unquiet Ones because the viewer is subjected to a series of loud musical cues and amped up sound effects in a desperate attempt by the filmmakers to illicit a reaction from the audience. This approach has become popular recently and is often described as 'cattle prod' cinema, with audiences jumping as if hit with 20,000 volts. The first few times that the film subtly reduces the audio before ramping up the sound suddenly, it's called dynamic range folks, there is a knee-jerk reaction. But you quickly become wise to this tactic and as you get used to the rhythm of the film you start waiting on the next big bang.

This approach might have worked if the film had managed to create a suitably unnerving atmosphere, after all The Woman in Black had its fair share of loud noises but was also genuinely creepy and thus far more effective. The Quiet Ones really struggles with its tone, unsure if its a full-on horror film, a character piece or a psychological drama. The experiment that the film claims to be based on actually happened in Canada in the 1970s, where a college professor and his students tried to create a ghost using the power of their minds. They claimed to be successful and whilst not suggesting that their ghost was the soul of a dead person, they did feel that the strange manifestations they reported seeing could be the result of some form of telekinesis, thus explaining other reports of ghosts. Or it could just be some form of group hysteria which seems far more likely.


The Quiet Ones suffers from a decidedly confused tone and is never quite sure what it wants to be.

The film changes the location to a 1970s Oxford University, where Professor Joseph Coupland (Jared Harris), a lecturer in abnormal psychology, has developed a theory that ghosts and poltergeists are nothing more than the telekinetic manifestations of a disturbed person's mind. He theorises that if this power can be captured in some way, the person can be cured. To say his approach is less than scientific is an understatement, as he locks a disturbed girl called Jane (Olivia Cooke) in a room in his house in Oxford and plays Slade's 'Cum on Feel the Noize' at full volume. Quite why is never made clear but he thinks that the strange events that seem to manifest around the Jane could be triggered by trauma. Although if he'd really wanted to generate a reaction out of her maybe he should have tried some Jimmy Osmond.

Coupland has roped two of his students to help with his strange experiment - the decidedly slutty Krissi (Erin Richards) and technically-savvy Harry (Rory Flek-Byrne). He also hires the services of local cameraman Brian, played by Sam Claflin who was most recently in Catching Fire, to document everything on film. Thanks to complaints from neighbours about the noise, the university discovers what Coupland is up to and, quite sensibly, throws him out. However, rather than conducting his experiments under controlled conditions in a laboratory and despite claims to Brian that he might not be able to pay him, Coupland rents a huge house in the country. The remainder of the film mostly takes place in this one location, aside from the occasional trip back to Oxford. Regardless of any misgivings about Coupland's less-than-scientific approach to his theories, the film could still have worked if it had concentrated on creating a sense of dread and fear. Instead it let's the audience off too easily with empty scares that deflate any tension that the film has managed to create. The Quiet Ones could have worked if the filmmakers had kept their cards close to their chests for longer but they play their paranormal aces far too early. As such, when Brian suggests that the entire experiment could be a hoax perpetrated by Coupland and Jane, there has already been too much paranormal activity that can't be rationally explained for anyone to believe that's the case.

This is a shame because it might have been an effective way of wrong-footing the audience but as it is you're always one step ahead of the film and even some of the supposed revelations concerning both Coupland and Jane's respective pasts are fairly easy to spot from early on in the movie. By the time we reach the end, events have taken a turn for the silly and aren't helped by some ropey effects. The film fails to effectively explain its plot or the events that are happening and the lack of any internal logic becomes frustrating. For example, there is no explanation as to why the film is even called The Quiet Ones, aside from a single mention by a secondary character that remains unanswered. This brief exchange also raises doubts about Coupland's motives and intentions but once again the opportunity to make the plot more interesting is lost.


The filmmakers confuse loud bangs with genuine scares and so the film quickly becomes tiresome.

The film was clearly made on a limited budget but the filmmakers do a decent job of recreating the 70s, even if the costumes, set dressing, diegetic music and constant smoking rather draw attention to themselves. The direction by John Pogue, who is better known as a screenwriter, is also competent and the film was shot in an unusual (these days) aspect ratio of 1.66:1. This was probably chosen so that when the film cuts to Brian's 4:3 16mm footage, which it does frequently, the switch isn't too jarring. The decision to keep switching to Brian's footage often gives the film a 'found footage' feel that sometimes at odds with the rest of the movie and thus doesn't always work. The one saving grace are the performances which are generally excellent, especially Jared Harris and Olivia Cooke, and you can't help but wish they had a better script to work with.

Ultimately The Quiet Ones is a disappointment, failing to deliver the kind of genuine scares that the similarly themed The Woman in Black managed to generate with ease. Instead we're left with a poorly plotted and scripted film that fails to create the right tone or even sufficient internal logic to support its central premise. Despite some solid performances, the filmmakers rely too much on loud noises to shock the audience, rather than reeling them in with mystery, suspense and a genuine sense of dread. They don't even managed to explain the title, which just about says it all.