This is a classic sports underdog/coming-of-age story, and it’s done really well and in a refreshing way. 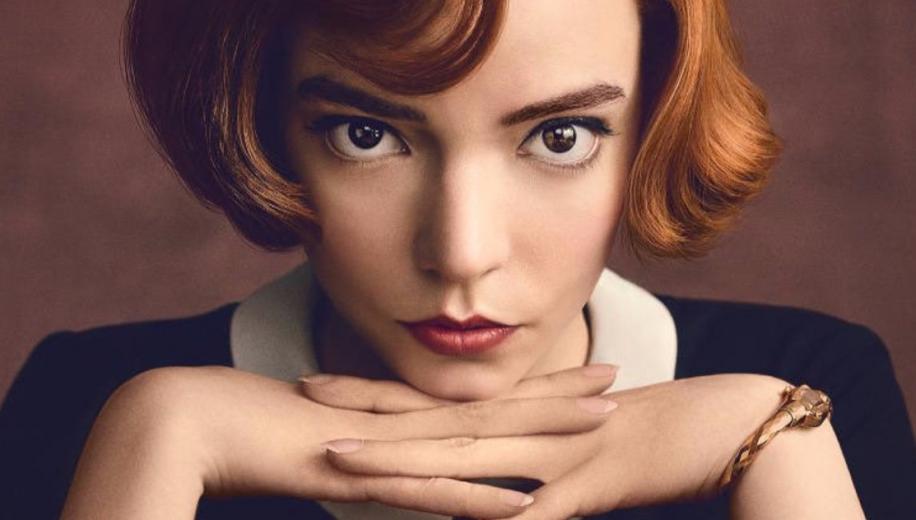 If you’re reading this thinking that a period drama series about a female teenage chess prodigy isn’t for you, hold on a second. The Queen’s Gambit might have a very niche premise, but you definitely don’t need to be a Grandmaster to be hooked…

Based on the 1983 novel of the same name by Walter Tevis, The Queen’s Gambit is set over a decade in the 1950s and 1960s. We start with young Beth Harmon (initially played by Isla Johnston), who’s orphaned after her maths-genius mother is killed and is moved into a Kentucky orphanage. Beth is taken under Jolene’s (Moses Ingram) wing, and soon learns to navigate the state-mandated narcotics prescribed to the orphans to keep them calm.

At the orphanage, Beth happens to meet janitor Mr Shaibel (Bill Camp, excellent), a grumpy old man who spends his spare time perfecting his chess moves in the basement. It’s not much of a spoiler here to say that Beth is soon besotted with the game, and it isn’t long before she’s got the best of Mr Shaibel, the top dogs at his chess club and most anyone else who steps up to the board.

After a few years at the orphanage, Beth’s adopted and taken to a staid home in the suburbs, armed with the knowledge that chess is her everything. As it turns out, the orphanage experience will have a profound impact on Beth’s life, in that Mr Shaibel’s lessons shape her whole identity, and that the early-onset doping will also impact things to come.

A few years down the line, Beth is now played by the superb Anya Taylor-Joy, and is being parented largely by Alma (Marielle Heller), with her adopted father an absentee for the most part. Despite some teething problems, Beth and Alma soon enter the male-dominated world of chess, encountering a series of challengers who alternately try to dominate/mentor/patronise/love Beth.

This is a classic sports underdog/coming-of-age story, and it’s done really well and in a refreshing way. Director Scott Frank manages to make a whole series of chess matches seem approachable, exciting, absorbing and even magical across the episodes. Seriously, it’s wild how many different ways Frank manufactures to present the chess board as a new battleground. Using the board as the location, hanging back casually as an observer, even utilising the classic split-screen; Frank’s work – in conjunction with cinematographer Steven Meizler and with exciting editing by Michelle Tesoro – makes even the biggest chess novice in the world a participant.

Beth is always centred here – this is her story, even though we meet a few competitors, including Kentucky’s hotshot Harry Beltik (Harry Melling), Russian grandmaster Vasily Borgov (Marcin Dorocinski) and make-chess-cool-again rockstar Benny (Thomas Brodie-Sangster). Taylor-Joy is phenomenal, and cliché as it may be – the camera loves her. Beth isn’t always one for words, so Taylor-Joy does lots of communicating with her incredibly expressive eyes, and Meizler frames her face beautifully, capturing Beth’s every emotion as she battles at the board and with the addictions that besieged her mother.

Another starring role is the series’ soundtrack by Carlos Rafael Rivera, which is uplifting and melancholy and exciting and stirring and soaring and subtle all at once. This is a period piece, and it looks every inch of it; Uri Hanisch’s design leaves no detail to chance, and every shot is gorgeously outfitted as we travel with Beth all around the world of the 1960s.

The series avoids the pitfalls of making Beth simply a chess nerd, or a weird orphan, or a misfit kid. It makes sure we know she’s a force to be reckoned with, a flawed and vulnerable character and also a bit of a fashionista. Costumes by Gabriele Binder are perfectly executed across characters everywhere from Kentucky to Moscow to Mexico City, but they shine on Beth, where they chart her evolution from orphan to child to world-beating champion.

One of the joys of the series comes from watching Beth and Alma grow together. Heller (known for directing Can You Ever Forgive Me?) is wonderfully real and heart-breaking as a woman trapped by her time. It’s also refreshing to have a woman-in-sports story focus on uplifting relationships with women, rather than casting Beth as a love interest or outlier of some kind. In fact, it’s a shame there wasn’t more time to delve into the life of Jolene and even spend some more time with Alma, both of whom feel like they have more to say.

In fact, even though all the seven episodes are all excellent and do a great job of telling one story, it still feels like there’s more time we could spend in Beth’s world, and with these characters. Who knew chess could leave you wanting more? It would be fascinating to see a female director (Heller, perhaps?) take the reins on a future iteration of this world to see what moves can be made.

Ultimately though, it’s all about Beth, who is probably one of the year’s most interesting leading characters to grace our screens. Taylor-Joy is exceptional, and the storytelling really effective – though a working knowledge of chess is presumably helpful in navigating some of the match scenes, Frank and his co-writers treat the audience with enough respect to let us follow along, resulting in really absorbing television that’s interesting and heartfelt as well as innovative and lovely to look at.