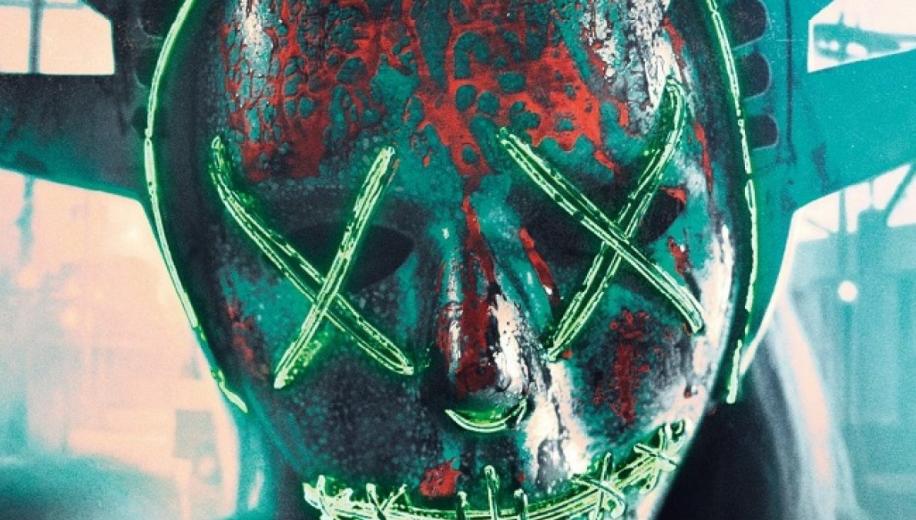 The Purge: Election Year rounds out a trilogy which has gone from strength to strength, delivering a politically-infused thriller leagues ahead of its home invasion horror origins.

Whilst The Purge kept things small in scale, it's sequel The Purge: Anarchy, stepped things up. Changing the scope and setting from the single home of the first to the bloodied streets in the city, it better capitalised on the sci-fi backdrop, shifting from home invasion horror to The Purge meets The Punisher. Election Year takes things up a notch in terms of politics, with more connective material to its predecessors, and a grander ambition to the narrative. It topically focuses on a Presidential race between a female candidate who would like to end the violence of The Purge, and an almost evangelical male counterpart, pandering to the lowest common denominator public mentality, and hinging his campaign on the cycle of violence that he deems is the God-given right courtesy of him and his New Founding Fathers.
After his success leading the charge in the second movie, Frank Grillo's character thankfully returns here, as a security specialist protecting the Presidential candidate from various factions including a hit squad disguising their actions on the infamous free-for-all night. The narrative offers some eventful twists and turns, whilst, in the background, the race is on to determine the future of The Purge and, arguably, the country. It may still be relatively low budget, but it's a surprisingly ambitious piece, with some topical commentary set against a socio-economic skeletal structure which is not that far removed from our own. One of the rare trilogies that just gets better with every entry, The Purge: Election Year delivers a thoroughly satisfying conclusion to what was initially little more than an unusual premise.

The Purge Trilogy was never going to make for obvious go-to demo material, with the visual design almost getting more gritty and dingy with every chapter. Election Year is a dirty-looking film, steeped in smoke and grit, with few obvious opportunities for the capabilities of the format – even on Blu-ray, let alone Ultra HD Blu-ray – to shine through. Thankfully, along with the first two movies – and, in particular the second chapter – Universal's Ultra HD Blu-ray releases of this series have focused less on delivering more sheer resolution in terms of numbers (the 2K DIs are going to seal the deal for many cynics, but they're missing out) and instead used at times exquisite HDR and WCG implementation to make contrast the name of the game, deepening and darkening the blacks, but popping the vivid colours that play against them. It's subtly impressive, bringing the rich, near-apocalyptic landscape to life, and better handling the pervasive shadows and smoky streets. The Ultra HD Blu-ray is far more stable than the original Blu-ray, tempering the fluctuating noise and handling the low level lighting much more adeptly.

Dialogue remains firmly prioritised across the front and centre channels, rising above the surrounding maelstrom even during the more action-driven sequences. The effects array offers up a hefty, claustrophobic environment – as aforementioned, it's borderline post-apocalyptic – with violence around every corner of every near-deserted street. The city is brimming with chaos and anarchy, and the immersive, engulfing track never lets that slip by you, obviously igniting the soundstage during the more hectic moments, with thunderous gunfights and explosions ringing out across the array and bringing the LFE channel into play.

The score drifts from insistent and oppressive to actually quite subtle and almost thematic for the material, proving a potent addition to the sonic field. Out of the three, The Purge: Election Year proves the most impressive on the aural front.

The Ultra HD Blu-ray release of The Purge Trilogy release doesn't offer anything new in terms of the extras available on the original Blu-ray releases, and doesn't even bother porting the old extras over to the actual Ultra HD Blu-ray discs themselves, but at least the accompanying Blu-ray disc allows the opportunity to still enjoy them. For The Purge: Election Year itself, that's not exactly a great deal, but at least it's not bare bones, with a couple of Featurettes and a few Deleted Scenes. One of the rare trilogies that just gets more ambitious with every entry, Election Year delivers a satisfying conclusion to what was initially little more than an unusual premise. The whole arc can be best appreciated on this new 4K Ultra HD Blu-ray release of the trilogy.


The Purge gets more ambitious with every entry

Universal's Ultra HD Blu-ray release of The Purge: Election Year, for the time being, is only available as part of the Ultra HD Blu-ray release of The Purge Trilogy. It offers up distinct improvments on the video front – thanks to a surprisingly nuanced use of WCG and HDR – as well as an immersive audio upgrade thanks to a new DTS:X soundtrack, and all the extras available on the original Blu-ray disc which is also included here. Fans should strongly consider hunting it down.