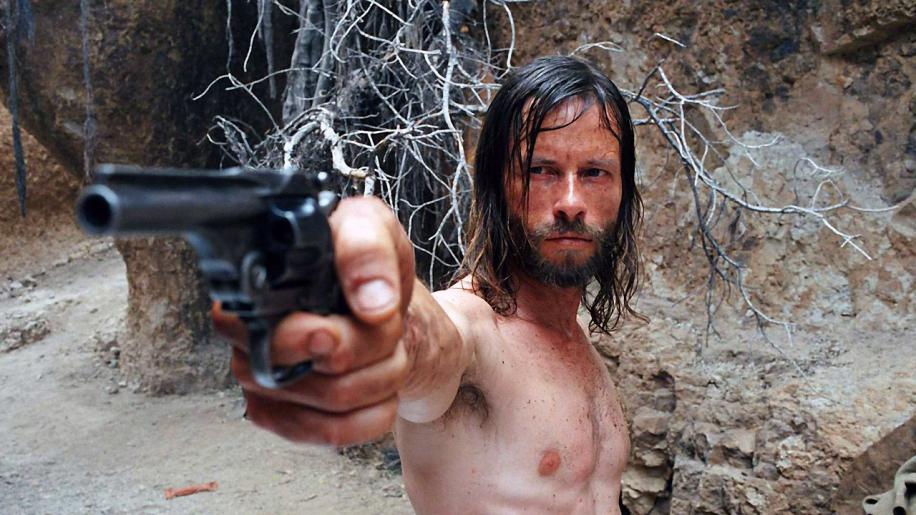 I viewed The Proposition on both a 32 inch and a 44 inch screen and found the anamorphic 2.35:1 image quite captivating indeed. It may not be quite as sharp as some other releases out there - some distance shots seem a little soft and hazy - but, in keeping with the film's slow, moody and almost dream-like quality, this could be intentional. Colours are superb - just check out the fantastically multi-hued skies and the pallid, practically jaundiced faces of many of the cast, especially Guy Pierce, who looks dreadful for most of the film. Blood is rich and bold, and the deserts, as drained of colour as they naturally are, still provide a stylishly rendered backdrop with precision and clarity. Yellow does seem to be the predominant colour of the film, but the baked landscape often looks sublime. A red-tinted scene in the Stanley's bedroom looks particularly effective, as do most of the interior shots, with smart contrast and blacks that are full and deep, providing some terrific shadows and strong night-time scenes.

Detail is good, although I noticed some very slight drop-off when viewed on the larger screen. Those with whopping big projection screens may have more concerns about this, but I haven't been able to check it out for myself, yet. There is absolutely no print damage, however, and grain is kept to a minimum. Compression evidence is, thankfully, of no consequence, although I did notice some edge enhancement during some of the brighter activity out in the desert. Overall, this is a pretty smart transfer that should please most viewers.

Despite being equipped with a DD5.1 soundtrack, I found that The Proposition offered next to nothing in terms of full surround sound. But I'm not going to mark it down for this because the film obviously wasn't intended to wrap itself around you, and is still very enjoyable in its own right. Apart from the gun battle that opens the film, which features bullets punching holes through the tin shack in which Charlie and Mikey are hiding, and has some nice ricochets bouncing around behind you, there is little else that employs the rears for any specific activity. However, the melancholy score by Cave and Warren Ellis, has a tremendous presence, with the rears adding slight boost. Other than that, they are utilised for ambience and do a fine job - the dust storm that kicks up around the flogging sequence, for instance.

Dialogue is strong and clear and there is some steerage of voices across the front soundstage. The film certainly feels opened up with the frontal assault, with the sense of vast ranging plains and eerie mountain ranges nicely evoked. Gunshots always sound sharp and robust, yet you must remember that the film is primarily a mood piece that has no need of intricate or flashy sound design. With this intended tone in mind, I had no problem with the audio transfer at all. Oh, wait a minute ... there is one instance of drop-out on the track, but this coincides with a very obvious and somewhat clumsy layer change, so is probably just down to that. Incidentally, both players on which I viewed this disc suffered the same glaring layer switch.

Well, considering that The Proposition is such a fine and highly regarded movie, its own country seems to have left alone in the DVD desert without much company in the way of extra features. We get some trailers for Seuno, The Exorcism Of Emily Rose and Mirrormask, and then we get The Proposition Featurette, which clocks in at 13.02 mins, and virtually diddly squat about the film itself. Instead, this piece is a look at the impact that Australia's Cultural Heritage Act 2003 had upon the making of the film. We are on-location with Pearl Eatts, who is the Cultural Heritage Advisor for the movie, as she walks around some of the historical and sacred aboriginal sites that the film is using. She shows us some artefacts that have been found and discusses how she educated the cast and crew in order for them to respect the land upon which they would be working. We hear of the “dusting down” ceremony that everyone had to undergo before shooting commenced, and discover that one particular location, which was the scene of a terrible massacre of natives, is now a picnic area! She acted as the spiritual guide for the film, forged relationships between the sites, the history, the different races and the film crew. We do get to see John Hillcoat and producer Chris Brown, but essentially, they have little input. Not a Making Of, at all, although it is still an interesting piece.

To be honest, folks, this is utterly disappointing treatment of a movie that demands some background. I can only hope that the R2 or R1 releases can find some material to add. In the meantime, for those interested, there is a very competent little half-hour making for the film featured on a free DVD that was available in a very recent issue of a certain UK movie magazine. I'll just make do with that for the time being.

The Proposition is an excellent movie. It's not quite the re-invention of a genre that some claim - I mean we've had a slew of revisionist westerns since the late 60's. Although, having the tale hail from the Outback is still unusual. It is a marvellously atmospheric mood-movie that is backed-up by some powerhouse performances. Pierce, Huston and Hurt are splendid, but Winstone is painfully brilliant in a role that I doubt anyone else could have brought to such wretched life. Nick Cave's writing is stylish, eloquent and mannered, and Hillcoat's direction is considered and strong. There is a feeling that something else could have been added to the melting pot, but then the plot kicks in around a time and a place that was desperately in search of rhyme and reason ... so ambiguity is, I suppose, a highly relevant theme to exploit. It won't appeal to everyone, but I was gripped from the very first frame.

The transfer is pretty respectable, but this R4 release is severely compromised by its lack of extras. A shame, indeed. But the film comes very highly recommended.