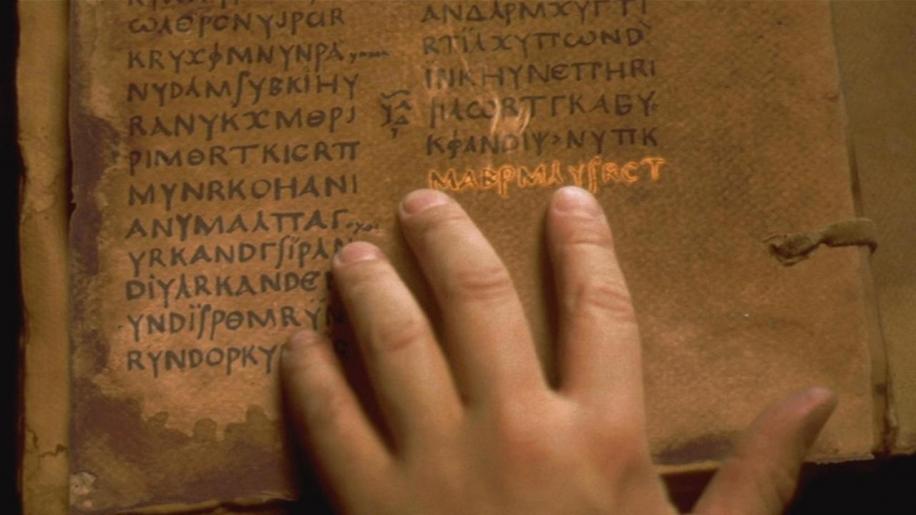 “It's a local tradition to leave a coin behind for the dead.”

“Yeah, it pays their way into Heaven.”

The newest chapter in the Prophecy series ditches Christopher Walken, gains Sean Pertwee and strikes out alone in the nicely atmospheric setting of Bucharest. Newcomers to the franchise take heart - you do not necessarily have to have seen the first few entries to follow the flimsy plot of this instalment. Again taking the eternal battle between angels and demons as its template, Uprising (still not sure what that title means) presents us with the Lexicon, an ancient religious manuscript that is still in the process of writing itself, falling into the hands of the unsuspecting Allison (played with TV Movie of the Week conviction by Eight Legged Freaks' Kari Wuhrer). The book holds the secrets to destiny and the end of time, and will prove to be a pretty powerful tool in the arsenal of the fallen angel that can obtain it. Kind of like getting your mitts on that sports almanac from Back To The Future 2. How all this pseudo-theological mumbo-jumbo fits in with the rest of the franchise I can't say because I gave up on the series after the first lame movie and with this offering, it's safe to say that I had been wise to do so.

“Don't bother looking for the heart - he always takes it.”

Into this dreary and uninspiring plot wanders undercover cop Dani (played by Sean Pertwee), whose latest informant has just had his heart rather unceremoniously removed. His new partner, the strangely glazed and reflective John Reigert (John Light) pretends to hail form Interpol but his enigmatic stare, cool long coat and low, measured voice mark him out as a player of different variety entirely. Why does he need Dani and just what is the secret connection between the guilt-riddled cop and poor, scar-faced Allison? Oh, and let's not forget the body-swapping demon that is hell-bent on taking the Lexicon from her. Intrigued? Well, you shouldn't be because all director Joel Soisson is concerned about is removing all action and suspense (the literal heart of the movie, in fact) from his unwarranted exercise in bland, thrill-less, chill-less horror hokum. Hearts getting ripped out, eh? Perhaps I should add virtually bloodless, too, before any gore hounds out there think that there may yet be something of value in here.

Now, I'm not saying that this is a bad film. It's not really that bad ... it's merely, irrelevant. It's got a set-up, an initial premise, but very little beyond that. Circumstances that take place mean nothing, the plot takes us nowhere that matters and the eventual outcome reverberates with a resounding so what? All the characters lack soul or purpose. The script allows them nothing to play with. John Light - a talent vacuum, if ever there was one - is saddled with a heap of cod-religious babble that fails to carry any weight, nor any relevance. A raging battle between fallen angels should be more than a few lightweight philosophical taunts, and the final face-off between Reigert (or whoever he really is) and the latest bodily host for the heart-ripper which, in this case, happens to be Hellraiser's Pinhead himself, Doug Bradley, is profoundly mostun-profound, rendering the whole thing a literal waste of time. Boasting no interesting set-pieces bar a rather nasty flashback, no shocks whatsoever and singular lack of momentum, Uprising offers us nothing at all to get the juices going. Bucharest is a marvellous setting but Soisson (despite what he may say in the commentary) so cruelly under-uses it that the story could have been staged anywhere. His attempts to create evocative and haunting imagery from locations come across more MTV-style than Dario Argento - statues of angels with speeded-up skies whistling past or trippy day-to-night morphing that bleed all tension away by being far too self-conscious and showy. Nor is there anything fresh about the miss-matched buddy scenario for Dani and Reigert, which is just allowed to meander along without any thought or structure. A series of lacklustre and un-involving situations tell us next to nothing about why all this happening and, indeed, offers us no reasons to care about the outcome.

“Right now, you have to look at me as the lesser of two evils.”

I like Sean Pertwee, he has a terrific noir-ish, on-edge look. He actually does appear haunted and harried in this. But allowing him to lapse into swearing-for-the-sake-of-it dialogue is not big, not hard and certainly not clever. In fact, I believe that he has considerably undersold himself with taking on this role. Looking less and less like his Timelord-father, John, and more and more like punch-happy Russell Crowe he created a terrific backbone for the horror/comedy hit Dog Soldiers and his turn in TV's Cold Feet provided him with a useful sense of playful arrogance, but I've yet to see him reach his full potential in anything since. Equilibrium, anybody? Doug Bradley, so wonderful in the first two Hellraisers, can sure enunciate his words, but his style is so inherently theatrical that seeing his one brief snarling moment here is pure pantomime. His plight has become so entwined with straight-to-DVD horror franchises that his name appearing in a cast listing is a sure sign that the film is to be avoided. How many Hellraisers has there been now? And how many more Prophecies will there be? Now there's a truly scary thought.

So, to sum up - we have a quasi-religious fantasy film that contains no virtually no fantasy, actors that just go through the motions (if they can't commit themselves to the plot, how are we supposed to?) and a resolution that ties up nothing except for a largely irrelevant and unsatisfying subplot. Hold on, haven't I just described Michael Landon's Highway To Heaven? Mind you, I seem to remember enjoying that a whole lot more.