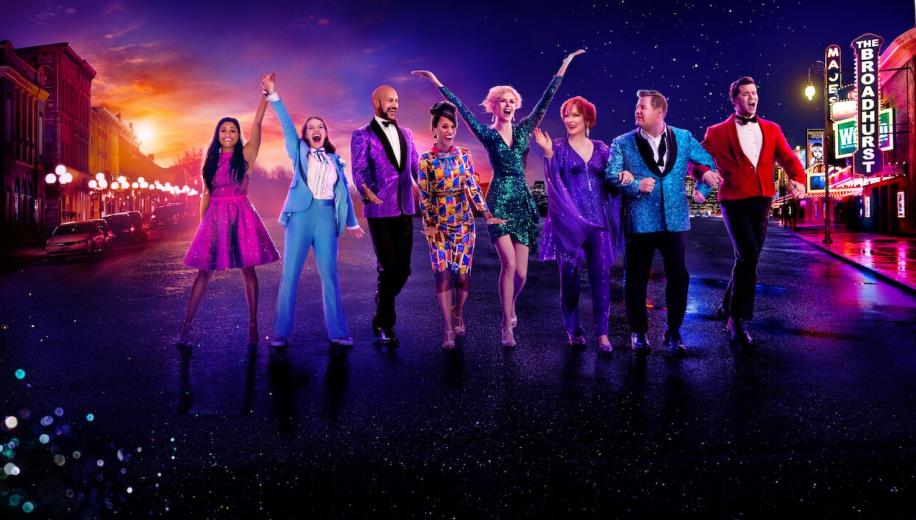 With a cast list boasting more stars than the crisp December sky, The Prom should really be more entertaining than it is.

The Netflix release is based on a play of the same name. The storyline involves Emma, a teenager who gets banned from her prom because she’s gay. It’s pretty topical stuff, really – it’s about Broadway stars and high school dances, both of which were extremely impacted by Covid-19. Despite that, The Prom comes out a bit odd, a few giant leaps removed from relatable.

The film’s opening 40 minutes or so are actually not too bad (dodgy accents aside) – there are good songs, jazzy numbers and you’ve still got that youthful new viewer naivete to pull you along. But then, for some reason, the film keeps going.

Flashy, shiny, overstated, extroverted and utterly self-indulgent, this is Ryan Murphy content in its purest form. This is one of those times where adapting a stage play to the screen hasn’t quite worked. There have been excellent examples over the years, and some very recent very vivid failures (this reviewer is still coughing up furballs from the Cats debacle of a year ago). The problem with The Prom seems to come largely from its retention of odd sets and cheesy dialogue that, without a live audience to interact with, hits at a weird angle.

The film should have been absolutely ripe for acidic self-deprecating barbs on the shallowness of celebrity and the vapid nature of internet culture. Instead, it’s a garish cheese-fest that’s oddly edited, confusingly shot and almost consumed by the (mis)casting of James Corden.

Flashy, shiny, overstated, extroverted and utterly self-indulgent, this is Ryan Murphy content in its purest form

The film opening up with Corden dancing around the screen is chillingly reminiscent of Cats, and begs the question of whether we’re going to have to put up with a Corden musical every December for the rest of our cursed lives? Considering he’s actually the only Tony Award-winner among the main cast, you’d perhaps expect Corden to fare well as a Broadway star in the film. Also, considering he’s spent so much time in the US, you’d expect him to have picked up what an American accent is supposed to sound like. However, Corden is hamfisted in his portrayal of flamboyant gay actor Barry Glickman, which ends up being part offensive, part completely ordinary.

It’s not all bad though, and perhaps unsurprisingly Meryl Streep is pretty great. She plays Dee Dee Allen, a self-obsessed Tony winner (hmm) who was recently starring in a show with Barry – Eleanor!, a musical about the life of Eleanor Roosevelt, until it ends in disaster. While drowning their sorrows, they meet Nicole Kidman’s chorus line actress Angie and actor Trent (Andrew Rannells), who’s turned to bartending to pay the bills with no acting work to be found.

The group soon find something to channel their various creative energies into when Angie spots a trending story about Emma (excellent newcomer Jo Ellen Pellman), who wants to bring a girl (Alyssa, played by Ariana DeBose) to prom. Unfortunately, Emma’s conservative mother Mrs Green (Kerry Washington) is the head honcho of the PTA, which apparently wields outsized power over Emma’s Indiana school.

Barry, Dee Dee, Angie and Trent head to Indiana, on a self-propelled quest to publicise the issue and save Emma’s prom from being cancelled – a quest that involves lots of glittery costume changes, fun dance routines and a couple of pretty good musical numbers. It’s not much of a spoiler to say that while the troupe travel to Indiana with their minds more than three-quarters on the publicity it will bring to their names, they soon learn a bit about thinking of others. It’s not quite enough to overcome the film’s other flaws (odd sets, Corden, no plot development, generic tone, Corden) to call it “feel good”, but it’s not an upsetting festive Friday night watch.

Murphy, famous for his controversial, glitzy and all-or-nothing shows, fails to strike the correct balance between heartwarming and camp here, and ends up robbing The Prom of much of the good feeling the original play had. It’s December, so you couldn’t say there’s such a thing as too much sparkle, but this film certainly errs on the ‘too much is never enough’ side of subtlety. That makes it sometimes fun, sometimes mundane, sometimes nauseating, and unfortunately never exceptional.

It manages to make a film about what’s supposed to be the most memorable night of these teenagers’ lives into something very, very forgettable

There’s nothing surprising or twist-worthy in The Prom, but then that’s not the kind of movie it is. There are some very funny lines, and the story at its heart – about acceptance and fighting for what’s right (no matter your self-interested motives) – is lovely. But the very dodgy casting of Corden, uneven storytelling and attempts to skewer celebrity self-obsession that don’t quite land make The Prom a bit of a confusion and just a very ordinary, occasionally cringeworthy film with some big names doing the absolute most to ham it up to varying degrees of success.

It’s overly long, and with little to no stakes or interest from a cinematic point of view, it manages to make a film about what’s supposed to be the most memorable night of these teenagers’ lives into something very, very forgettable.