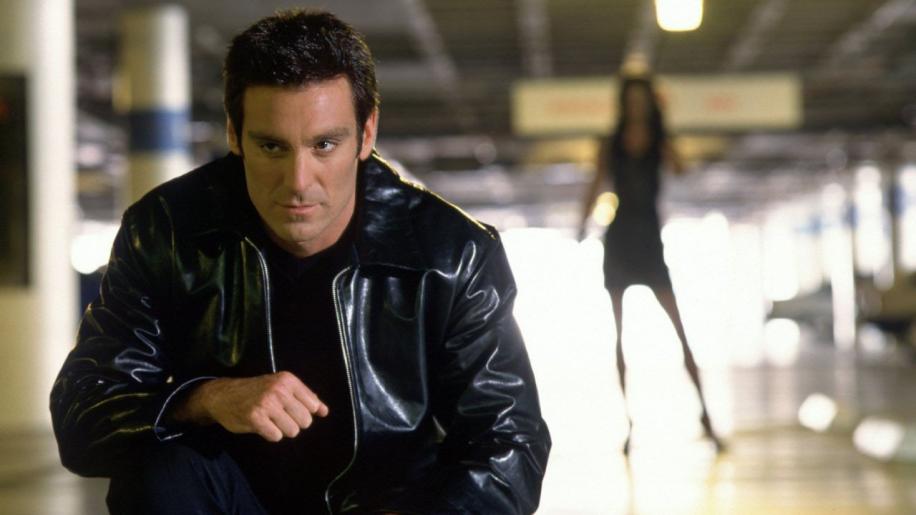 Fox's disc presentation of The Pretender Season 2 exhibits both the good and the bad of television transfers. Whilst the image is enhanced for widescreen and the print used is reasonably free of any damage, the picture is actually quite soft and occasionally reveals some shots to be incredibly murky and stippled with grain. You know the drill - a night-time sequence, or one set in a darkened room that looks pretty good in one shot and then suddenly flares up with an alarming degree of smudgy grain in the next. Admittedly, these failings are brief and only a few episodes actually suffer.

The black levels, on the whole, are strong and offer a good, solid depth. Colours are warm and the softened image still maintains a healthy and pleasing fidelity and range. Skin tones are well handled and don't look too heavily made up in that often rosy, glowing TV-style. Exteriors are bright and hold a good level of contrast, interiors display a wealth of shadow (when necessary) and a reasonably high degree of detail. We're not talking finite detail here, though. The image tends to reward the big, uncomplicated things in front of the camera, making the main picture a pleasant, lively and interesting canvas but without the benefit of crystal clarity. The small things don't seem to come across quite as well - but this is possibly partly from the nature of the medium, itself, and also due to the overall softer hue of the image.

I noticed some edge-enhancement that only rarely became an issue, and even then, only upon a 44 inch screen. Viewed on a 32 inch, this ceased to become a problem. There was evidence of some artifacting, but this was not spread across the board, with the season, in the majority, faring well with regards to the usual digital suspects. Some motion judder does plague some later episodes, though.

All things considered, I was very happy with The Pretender's visual transfer. And there's no reason why you shouldn't be, as well. We only get a Dolby Surround track on The Pretender, which given the original format for the show, is hardly surprising. With some fairly interesting dynamics spread across the front - voices emanating from one speaker and replied to in the other, doors opening/closing etc - the rears sustain a very low level of ambience. Occasionally, when an episode gets busy the bass sounds quite meaty and we get a richer, more involving soundscape. But, with regards to any aural fun, The Pretender is, for the most part, underwhelming. The show is mainly dialogue driven, and this is always delivered clearly, although, at times I feel, a little detached from the speaker's mouth. This may be due to the fact that the disc seems to play quite loud, though, with some voices tending to boom a tad un-naturally.

Some attempt is made when there is something exciting taking place, a thunderstorm, perhaps, but the track lacks distinction, or realism. Not the best mix, but still quite serviceable given the format. The Pretender Season Two is pretty threadbare when it comes to extra features. We get Commentary Tracks on the exciting and pivotal episode Red Rock Jarod and the 2-Part season finale Bloodlines, and a 3-Part Making Of slotted around the four discs in the package. The chat tracks are fairly informative, but the participants on Red Rock Jarod, series creators Craig W. Van Sickle and Steven Long Mitchell and director Fred Keller are a little light on anecdote, but heavy on praising the show in general. They are polite and chatty and don't give too much away, but tend to respond purely to what's on the screen and state a lot of what is quite obvious, even for relative Pretender-rookies like me. For the season's cliffhanging finale, they are joined by Michael T. Weiss and Andrea Parker and things do get a little more interesting, though again, the emphasis is placed more on basic character beats and motivations. Weiss has got a deep grow of a voice. Not bad, but not very exciting either.

The 3-Part Making Of comes in little seven to almost nine-minute segments. The first, found on Disc One, Side B is just entitled The Pretender Season 2 Part One and features sound bites and talking heads from all the main cast and creators, alongside fast, and poignant clips, from the show. This segment details the quest undergone by the characters throughout this season, their evolution and the fact that the makers wouldn't allow the cast the privilege of knowing in which direction the story was heading. Weiss still looks a bit unusual, but Andrea Parker looks far sexier with blonde hair.

Part 2, found on Disc Two Side B, is focuses on the them of “Identity” - the characters gaining it, losing it or even just forgetting it. And Part 3, found on Disc Three Side B comes full circle on the theme of “Family”. This attempts to chronicle, and hint at, the full relationships of the characters to one another - and how everyone seems to have brothers coming out of the woodwork. These little tasters contain spoilers, but they also provide a neat rounding off the key events and motivations that spur this season on. They are brief, but I quite liked them. Bite-sized nuggets, and easily digested. Well, I dived into this knowing next to nothing about it, and ended up really enjoying it. The Pretender has a lot of very familiar elements that, bound together, have helped to create a quite unique show in its own right. The performances are good, the writing hits the right notes much more often than it misses them, and its air of conspiracy and mystery is always well maintained. I gather that there are at least two more seasons to follow on from this, and even a movie on the way. So, that means that I've got a helluva lot of catching up to do. But, with a show as consistently entertaining as this, that would hardly be a chore.

Fox's boxset has run-of-the-mill AV quality - but certainly nothing in the transfer to put you off purchasing - and a small, but relatively informative selection of extras. I recommend it ... and I'm not pretending, either.