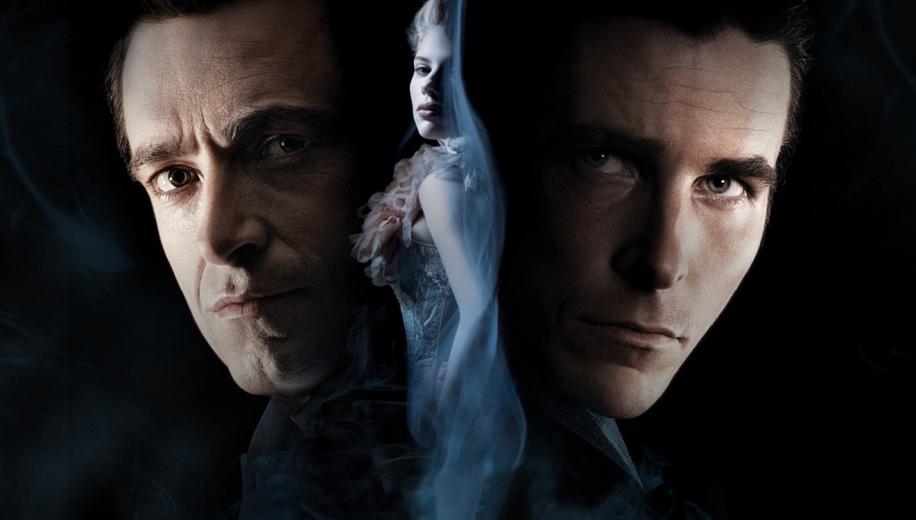 Brimming with clever misdirection, The Prestige is one twist too many to be perfect Christopher Nolan, and the only fantasy for the otherwise grounded auteur.

The impressively structured tale follows two fellow magicians who, through tragedy, break apart and become dogged competitors to one another, desperate to one-up each other at any cost. Their best tricks are kept alluring, part of the narrative twists and turns, as Nolan works his own magic to draw you into this world of illusion, where the human sacrifice in the name of art and showmanship is really quite tragic. Ultimately, despite boasting some of the smartest unexpected surprises you'll ever come across, the resolutely grounded filmmaker (he's the same guy who made Batman seem plausible) takes something of a leap of faith with his final twist, going full steampunk horror fantasy. Some might find this the only time he's come close to actually cheating the audience, but even for those, it's undeniable that he capitalises on the emotional impact.
Stellar performances from Hugh Jackman and, in particular, then Batman Christian Bale - who does well to escape the cape - drive the piece, whilst a few Nolan regulars pop up (including the ever-present, and ever-reliable Michael Caine), but the palpable tragedy largely comes from the tremendous female contributions, with Scarlett Johansson and Rebecca Hall providing fine early performances. Special mention also to the late David Bowie's fabulously enigmatic Tesla, a character who really needs his own film (and whose inventions deserved better due than the fantasy twist employed here). This is top tier Nolan storytelling, and even if it is a bit leftfield for the filmmaker, he makes the most of his skills with time and the ensuing twists he can pull off, channels his game cast into characters who are surprisingly dark and flawed, and keeps you gripped throughout.

Shot in 35mm and framed in 2.39:1 widescreen, this was another comparatively early era Nolan film shot before he started playing with IMAX and shifting aspect ratios (with the subsequent The Dark Knight), and, as with the preceding Batman Begins (and the later Inception, his only subsequent 35mm-only production), it's obviously softer in style than the IMAX efforts. Nonetheless, the new 4K scan - supervised by Nolan himself - affords the production a native 4K presentation on Ultra HD Blu-ray, and marks a step up from the earlier Blu-ray release, even if it is still a somewhat flawed end result that isn't likely to make anybody's demo list.

Detail is very good for the most part - it is a clear improvement over the Blu-ray and plopping that disc in will prove the same - with some nice skin textures and lines, flecks of hair and clothing weaves all picked up on. It still suffers from the same light focus limitations of Nolan's other 35mm works, namely that the close-ups remain outstanding on the format, but some of the wider shots don't quite deliver the same stunning image, some not at all. Slightly more distracting can be the black levels. Whilst HDR affords the film greater shadow detail, Nolan isn't famed for his consistently and resolutely inky blacks, and this earlier work from him is a testament to that. Sometimes they are jet black, whilst other times they wander towards grey. Conversely, some of the stylistic choices - namely the magical golden hue afforded many of the sequences (including most of the magic scenes) look surprisingly good, with WCG giving a richness to this look that makes the sequences all the more impressive.

It is a step up from the Blu-ray, and no one should fool themselves into thinking otherwise, but the softer-looking image - which, to be fair, is the mainstay over the standout moments - is an issue that also shouldn't be denied. Whilst you're going to find worse DNR, softness, and greys on the Blu-ray, the Ultra HD Blu-ray doesn't (and likely cannot) eradicate all of these flaws, and it would also be foolish to expect otherwise. The Prestige remains in the best shape that it has ever been in, even if it's not in the shape we all want it to be in.

The accompanying DTS-HD Master Audio 5.1 track isn't quite a step up over its LPCM 5.1 predecessor, but more a sideways move, but that shouldn't be regarded as a slight when you consider that either makes for an impressive lossless track, providing the kind of sweeping, emotionally hefty accompaniment that you would only expect from a Nolan production.

Dialogue remains at the forefront, from Caine's voiceovers to the considered tones of Bowie, afforded prioritisation across the frontal array. Effects are surprisingly enveloping, particularly with the bustling crowded audiences in awe of the spectacles before them, as well as the stunts themselves, with the electric intensity of the Tesla-inspired tricks turning the soundstage into a giant Van der Graaf Generator, and your surrounds bustling with intensity. The occasional gunshot booms with LFE weight and the film is surprisingly powerful in its potent claustrophobia, with a thrilling score heightening the tension to - at times - unbearable levels. It's a great track.

On the extras front, as with the other releases in the Nolan 4K collection, the Ultra HD Blu-ray disc itself is devoid of any features, with the accompanying Blu-ray left to do the heavy lifting, and thankfully - as is also standard for Nolan releases - boasting a fairly strong selection of Featurette-based material.

The Director's Notebook: The Cinematic Sleight of Hand of Christopher Nolan is the catch-all Documentary title for the compilation of strong Featurettes covering the making of the movie, including Conjuring the Past, The Visual Maze, Metaphors of Deception, Tesla: The Man Who Invented the Twentieth Century, and Resonances, with a stills gallery, The Art of The Prestige, rounding off the disc.

Employing every trick in his expansive repertoire, master filmmaker Christopher Nolan delves deep into the world of magic with this powerful and surprisingly dark tale of tragic rivalry, which is one twist away from perfection, with the ultimate reveal being a point at which you either revel in the master non-linear sleight of hand narrative of Nolan or brim with frustration that this is his solution to the puzzle.


This is top tier storytelling, but also the only time Nolan has come close to cheating his audience

As part of the series of 7 Nolan films scanned at 4K and released in Ultra HD Blu-ray, The Prestige is one of the weaker entries, but still a resounding upgrade, with a strong audio track and a nice selection of extras. It's another must-have addition to your collection.