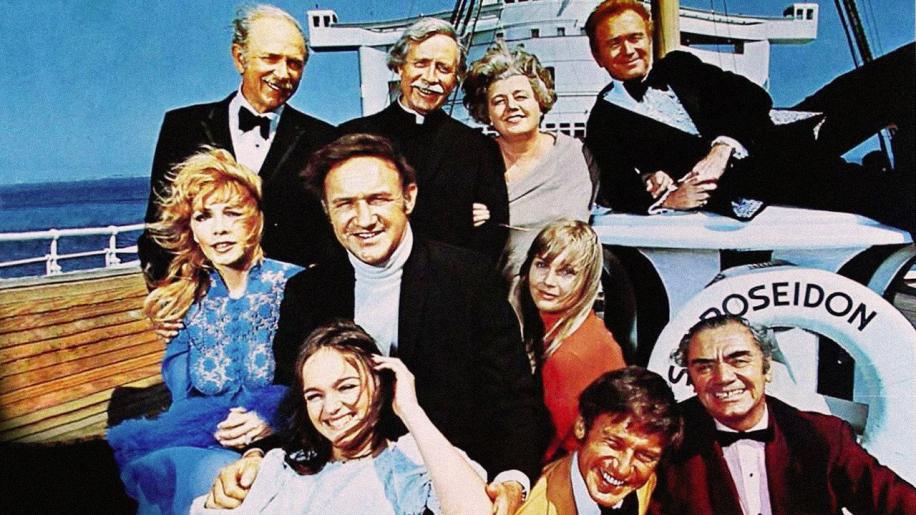 Presented in an anamorphic 2.35:1 transfer, this is arguably one of the finest looking transfers I have seen in recent times for a film this old. Beating the film's previous non-anamorphic incarnation, this new release looks absolutely splendid and certainly makes a splash. Colours are accurate, and rich and appear to be smoother, less harsh and less garish than on the earlier release. There's not a great deal of colour underwater in a seventies disaster flick other than blue and brown, but the transfer produces this palette superbly, and blacks and skin tones are well represented. The print is in amazing condition, with barely any flaws, damage, or dirt to be seen. Likewise there's barely the merest whiff of any edge enhancements or digital artefacts here. Obviously this isn't going to mix it with transfers of more modern films, but considering the vintage qualities of the movie this end result is quite superb.

Now I'm well aware that purists strive for the original audio source more often than not, however I have to admit to being slightly disappointed that Fox haven't seen fit to augment this new release with a new 5.1 or DTS mix for the film, as it's certain there's more than enough capacity in the audio to have done this. As it stands, this opportunity has not been revisited and instead we get the original 2.0 stereo track (the initial DVD release was 2.0 mono) on its own. The track itself is a great example of what can be achieved with a mere 2.0 stereo mix, with a nice clear audio that makes some waves into achieving a commendably degree of special surround given the limitations of the format. I still would have liked to have seen what could have been done with a new mix, however at least the original has been preserved well and does a fine job here. No complaints.

This new special edition arrives on DVD in a two-disc set that's as packed to the gills as Shelly Winters in that fetching brown frock. Kicking it all off is a pair of audio commentaries, one from director Ronald Neame (still going strong well into his nineties), and the second from a triumvirate of female stars Stella Stevens, Pamela Sue Martin and Carol Lynley. Both commentaries are tremendous fun, Neame's being hugely informative and good natured, while the collective track takes a more humorous and anecdotal approach.

Rounding off the first disc is an interactive feature 'Follow the Escape' which allows you to trace the path through the stricken liner following the plan of escape utilised by big Gene himself. It's diverting enough for a brief time and surprisingly entertaining.

Disc two contains the wealth of the supplemental additions, not least 'AMC Backstory: The Poseidon Adventure' a featurette that runs a little under half an hour in length. Featuring plenty of archive footage and extensive interviews with cast and crew, this is an interesting look at the production history of the film, and is informative enough to make you almost forget the cloying American narrator who does his best to throw your concentration throughout.

There are a monumental nine new featurettes prepared for this release. Six of these are divided off into a separate section. All are relatively brief, running between five to ten minutes each. Cast members are reunited (sadly no Hackman and no Borgnine either), there is a feature on stunt work, the writing, the theme tune, the construction of the ship, and also the role of faith in the film. Separate to this six are three featurettes with Ronald Neame, where he briefly discusses the making of two specific scenes from the movie, and also the reception to the film when it was released.

Disc two rounds off with a collection of minor material. There are some stills and photo galleries, a transcription of an article from American Cinematographer, and some storyboard-to-film comparisons for three scenes from the movie. Also included is a collection of vintage promotional material which includes trailers and teasers, and also a ten minute featurette dating from the time which interviews Hackman, Neame, Winters and Nielsen.

The quality of the package even extends to the product art, which faithfully replicates the original artwork, and offers a classy envelope containing four lobby cards.

A cracking package fit for the daddy of disaster films, I really can't recommend this highly enough. It's difficult to imagine anyone who can't fall in love with the simple pleasures of this movie, and the special edition tag, so often overused, is truly worthy here, with a wonderful print and some comprehensive additional supplements.