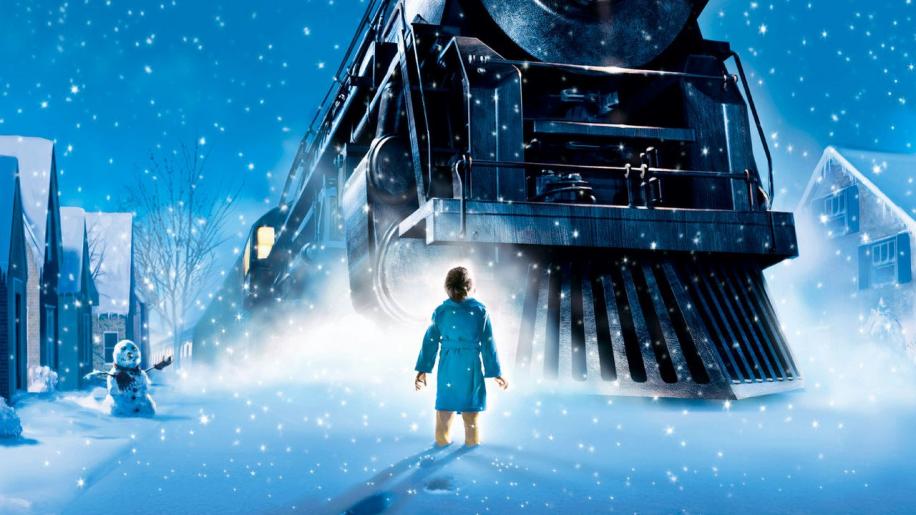 If it's a movie that will show off your projector or plasma or even your 28 inch lounge TV, then The Polar Express is that movie. With some of the most stunning CG animation ever created and a wonderful cinematic 2.35:1 aspect ratio, the image is truly breathtaking. Detail is razor sharp, yet large areas of colour such as snow, or close ups of skin is silky smooth and show no graduation of shades. This is as much down to the high quality rendering of the CGI as it is to the DVD transfer but either way, it looks fantastic. The movie is set almost entirely at night so blacks, shadow detail and contrast needs to be spot on and The Polar Express does not disappoint. The night sky is as black as coal with the misty, snow powdered landscapes contrasting beautifully. Detail is visible in even the darkest of areas and all this gives a tangible three dimensionality to the image. Colours are of course fairly limited in so far as night time and snow covered everything will allow but occasionally we get to see some wonderful reds and yellows in the train and once at the North Pole, rich shades of gold and scarlet shine through with luxurious warmth. Grain is a non-starter with digitally made movies as there is no film involved, only computers so what we have here is a perfect transfer of a perfectly animated movie.

The Polar Express 'only' contains a Dolby Digital 5.1 Surround mix and lacks any of the current buzz words such as DTS-ES 6.1 Discrete or Dolby Digital-EX but boy does it rock! I actually blew one of my bass cones when I had the sound up too loud during a scene involving the train and a sudden dramatic change in dynamics took me, my children and my poor speaker by very definite surprise. You have been warned!

As mentioned, the dynamic range here is incredible and maybe a little too extreme if you are watching say late at night and you have thin walls and neighbours. You tend to turn the sound up to hear the dialogue only to have the life scared out of you when the scene and more importantly, the sound suddenly changes. Bass weight and LFE signals are copious and are used to convey the enormity of the locomotive very effectively as too are the surrounds especially during the 'roof' scenes when the wind is howling past. Dialogue is for the most part fine, but during the louder scenes, voices can get drowned out slightly by the overbearing bass but this is never really a problem to the extent that dialogue is missed, rather you just need to concentrate that little bit harder to take in everything said.

Overall a fine soundtrack that fits perfectly with the scale of the movie and a real system challenger if ever there was one.

A truly fantastic selection of extra material which looks at every possible aspect of making The Polar Express. From The many characters Tom Hanks plays to the music score composed by Alan Silvestri to the original story written by Chris Van Allsburg to the unique animation. A few parts are touch upon more than once, but overall the extras are excellent and entertaining. Those extras include:

You Look Familiar - The Many Polar Faces of Tom Hanks

This section examines how 'Performance Capture' brings Tom Hanks to animated life and looks at the many characters he plays both in voice and performance ( Father, Conductor, Hobo and Santa) and also just performance (Young Boy). It uses split screens to show comparisons between filmed material of Tom acting the scene and the final animated scene and the similarities are uncanny. Following on from this we have:

A Genuine Ticket to Ride

This takes a look at how The Polar Express was created and its origin, the story of the same name written by Chris Van Allsburg. We have a short introduction then a menu page allowing us to select a given aspect of the movie or play all together. They are divided into: Performance Capture / Virtual Camera / Hair & Wardrobe / Creating the North Pole and finally, The Music. This menu page also contains another hidden bell Easter Egg as with the others, this shows another split screen side by side comparison of Tom acting a scene and the actual animated scene. Then we have:

True Inspirations - An Author's Adventure
Josh Groban at the Greek

Josh Groban is an American vocalist and this is a live recording of Josh singing 'Believe' in concert. Josh is not someone I know much about other than he did a fantastic version of You Raise Me Up' and this song too shows off his very melodic voice. After this is: Behind The Scenes of 'Believe'

Following on from the music video, we take a look at how the song was composed by Alan Silvestri and written by Glen Ballard and how they managed to hire Josh Groban to sing the song. This is basically a back slapping exercise and features interviews with the aforementioned musicians saying how wonderful each of the others were in bringing the song to life. Next a game:

This is a game aimed at the children where they try and control the locomotive sliding on the ice to safety on the other side by directing it left or right. Not too demanding for us adults, but the kids should enjoy playing it.

A collection of short interviews with the cast and crew of The Polar Express where they tell us their most treasured Christmas memory. We hear how someone's best memory is their gift given by their wife while someone else's is their vision of snow falling on the beach. Contributors include: Tom Hanks, Robert Zemeckis, Josh Groban and Chris Van Allsburg. Finally we have:

Additional Song: Smokey & Steamer sing 'It Takes Two'. A scene which was deleted from the movie and never actually completed to a fully animated stage, it features the characters Smokey and Steamer {the train drivers) singing a song set whilst the little girl and the boy are in the engine room trying to drive the train. The song is sung by Michael Jeter (both characters) who unfortunately passed away soon after.

That's about it for the extras. There are five Easter Eggs scattered about the disc most are in the form of Christmas bells which appear when you pass over them. They are positioned within the red borders on most menu pages and sub-pages. Also one is hidden in the 'Special Features' gold ticket situated at the top on the first special features page. These all consist of side by side comparisons of Tom Hanks acting and the final animated scene, great extras which add both interest and entertainment to an otherwise average movie.

The Polar Express is a technical masterpiece and contains some of the most sophisticated computer animation ever created but it is also lacking in other, equally important areas. The story is told in such a way as to alienate its most important audience, children. Sure they will be impressed by the visuals as will the adults, but it is actually quite a dark movie and lacks something more elusive than technical brilliance, it lacks spirit, the Christmas spirit.