The Place Beyond the Pines Blu-ray Review 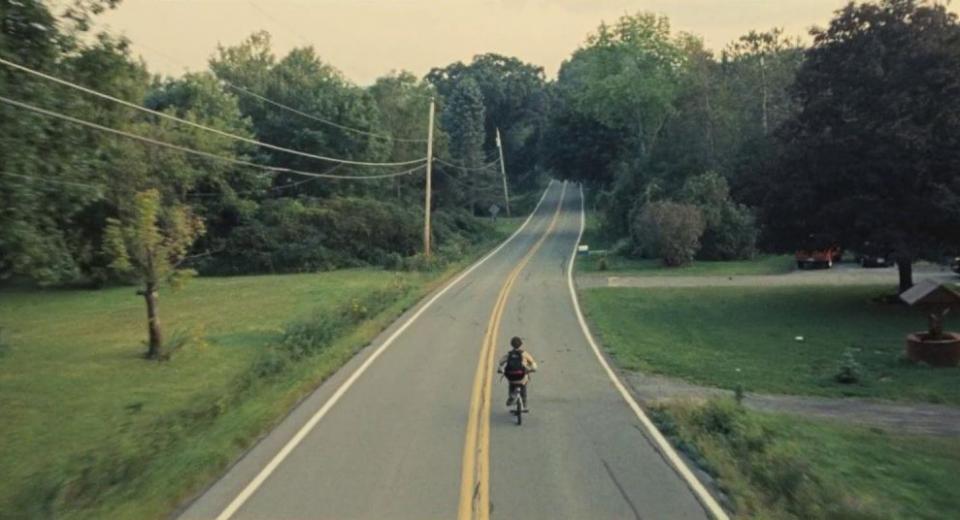 The Place Beyond the Pines comes to UK shores courtesy of StudioCanal, with a Region B-locked package that offers up the movie complete with a 1080p/AVC video presentation in its original theatrical aspect ratio of 2.4:1 widescreen.

It’s a gritty, organic and thoroughly filmic-looking presentation with a hefty slice of grain but stunning clarity shining through beneath. Detail is impressive throughout, particularly on the close-ups, where we get excellent skin texturing and clothing weaves, as well as excellent fine object detail. There are also some superb broader landscape shots, in particular the sweeping overhead shots as the characters are riding down that fateful path. There are a few softer moments caught up in the runtime, but that’s only to be expected for this long-take-prevalent guerrilla-style shoot, and it never detracts from you enjoyment of the film, even for a moment. The colour scheme is understandably restricted given the style of the piece, adopting a very natural-looking palette which boasts strong greens and browns, but does not go too far in terms of out-of-place hyper-vibrancy. Indeed it’s only a couple of moments that display any kind of tones – like the red traffic light splayed across Gosling’s face – but, again, that’s wholly intentional. Black levels falter slightly in the crush arena, but only during some of the darkest night sequences, and, again, it somehow fits in with the style of the piece, although it’s probably the only thing holding this back from top marks. Other than that, it’s pretty-much demo material on offer here; extremely impressive.

The accompanying DTS-HD Master Audio 5.1 track (superior to the alternative LPCM 2.0 mix that is on offer) also does justice to the material, although it does not quite achieve a demo ranking. Still, it is very good indeed, coming just shy of the upper echelons because its power and potency, whilst impressive, are not enough to come close to reference standards. Dialogue comes across clearly and coherently throughout, even when it is quieter and more contemplative, and it largely emanates from the fronts and centre channels. Effects provide several of the aural highlights – including the opening stunt sequence and basically everything involving the revving motorcycles – as well as crafting pretty authentic ambience and atmosphere in all key scenes. The score stands head and shoulders above the rest of the mix, however, as there are so many brilliant moments where the natural sounds are dialled down to silence, and the score is allowed to take over. Sublime.

Although not brimming with extra features, this release does boast a nice little selection, headlined by an excellent Audio Commentary from Writer/Director Derek Cianfrance, who provides a full-length dissection of his feature, relating his sources of inspiration, the original concepts and considerably longer first-draft cut of the feature (which we, disappointingly, don’t get to see here), as well as his work with Gosling and his ambition to make a three-tale feature. If you enjoyed the movie then this is a thoroughly engaging and utterly rewarding background accompaniment. There are also 10 minutes’ worth of Deleted Scenes, amounting to just four short moments which don’t add anything particularly special and certainly don’t lend us a greater insight as to what would have made the purported 3+ hour first cut of the film. The Featurette almost doesn’t deserve to be called such, amounting to little more than an enhanced trailer, with voiceover man going into overdrive. EPK all the way, it’s only 5 minutes’ long, four and a half of which is footage from the final film itself. There are also a bunch of Previews and a Trailer for the main feature.

Of course this is the Exclusive Limited Edition Double-Play Steelbook which comes complete with a second disc DVD copy of the film, and is packaged in a flimsy but still pretty fantastic-looking case, sporting the original silver teaser artwork, and the alternative standard BD artwork (and theatrical poster artwork) on the interior. With a silver, intentionally damaged-looking finish, fans and collectors alike will find it hard to resist picking up this special variation of the Blu-ray release. Reuniting with his lead from the brutally honest anti-romance Blue Valentine, Ryan Gosling, as well as teaming up with the likes of Bradley Cooper, Eva Mendes and Dane DeHaan - all on top form - director Derek Cianfrance has produced what is essentially something of an epic anti-crime drama here.

Notwithstanding a little-known indie debut, The Place Beyond the Pines represents his sophomore writer/director vehicle, an intersecting-lives drama in the vein of Crash and Traffic. And in true Cianfrance style it'll likely leave you equal parts moved and broken.
Don't expect a warm, pleasant experience - his films are always tragedies with the briefest glimpses of hope around the edges - but do expect one of the best dramas you’ve ever seen. Highly recommended.

On Region B-locked UK Blu-ray we get excellent video and audio, as well as a nice, if far from bountiful, selection of extras. No sign of the Director’s Cut but, until that unlikely day, it’s a must-have package; a blind buy that I can’t recommend enough.