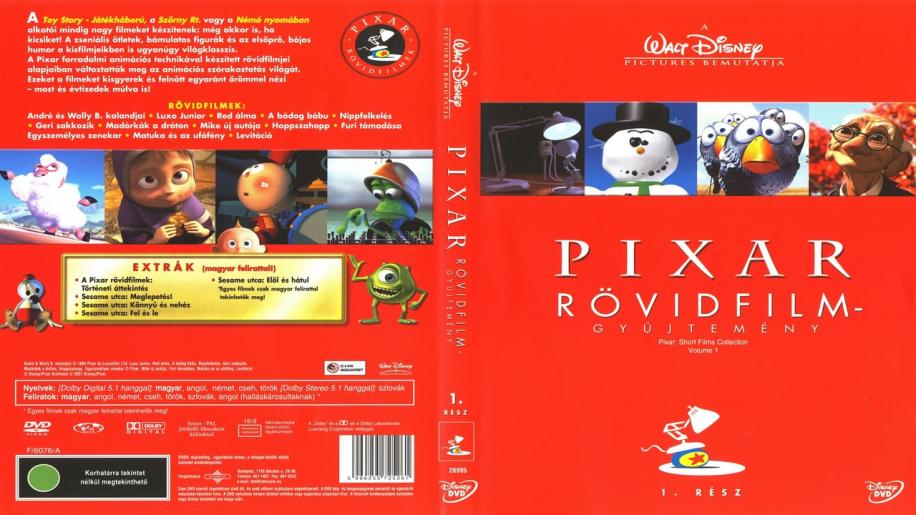 In 1984 John Lasseter left his job at Disney to join George Lucas' special effects computer team, that team would eventually become the Pixar that we know today. At that early stage Pixar's main focus was on the construction and selling of expensive hardware to allow other companies to render 3-D visualisations. Companies used their products for advertising, logo creation and medical analysis; all of these companies bought into this hardware based on what a small section of the company were able to do on these machines. Amalgamated these demonstrations ultimately turned into The Pixar Short Films Collection and it was not long before the powers that be at Pixar realised that animation, not hardware, should become the main focus of attention.

The Adventures of Andre and Wally B. 1984 - Showing very early CG animation with use of simple geometric shapes and colours. Andre is pestered by Wally, eventually understanding what the sting in the tail is all about.

Luxo Jnr. 1986 - The one which everybody fondly remembers. Two desk lamps, the younger of which exhibits great joy when playing with an inflatable ball only then to show sadness when the ball in question bursts. This animation showed to the world that technology with a decent animation team could produce more than just spinning globes orbiting around checkerboards.

Red's Dream. 1987 - A small unicycle is stored away in the corner of a bicycle shop. Obviously depressed he dreams of what might have been if only a circus performer had bought him. This short introduces atmosphere into the animation, with moody blacks of an almost film noir style, a dimly lit shop and a true sense of feeling from, and for, the monocycle itself.

Tin Toy. 1988 - The precursor of Toy Story, this one planted the seeds in the animation team at Pixar that a full-length emotionally connected film could be produced. The brief story of a new toy that becomes fearful of the encroaching Godzilla like, slobbering, baby. All other toys are wary of this beast and hide. The tin toy, initially fearful realises that his role is to make the baby happy and succeeds in doing so. This introduces for the first time a realistic attempt at skin tones, even though by today's standard it's pretty rough.

Knick Knack. 1989 - All the other little toys have freedom and are able to relax at will, apart that is from out little encased snow globe snowman. His attempts at escape rival the many attempts Wile E Coyote had at capturing the speedy road-runner. This is a more than enjoyable short and comes at a period when Pixar were trying to push the technology they had to it's artistic limits without having to develop new software.

Geri's Game. 1997 - A long time elapsed between the previous Knick Knack and this. Pixar had their hands full with the release of the iconic Toy Story and put their shorts on the back burners. Here though we see a gentle old man sitting in a park playing chess... with himself. Another millennium leap for Pixar as they try to render human realistic features. Note the trees in the background and compare these to the ones originally seen in Andre and Wally B., the sense of depth and realism has leapt ahead.

For the Birds. 2000 - This has to be one of my all time favourite Pixar animations, and another which pushes the CG animation boundaries. A story of small blue birds making fun of a larger, lankier cousin. The large bird tries to join in the pack but is not accepted, ultimately though it is to their cost. What we can see here are Pixar trying their hand at another texture, feathers. These appears soft and lifelike and the colours on offer is jaw dropping.

Mike's New Car. 2002 - Pixar now in full flow there's no stopping them, producing animated shorts which compliment their main features. The known Scully and Mike from Monsters Inc. join us here where Mike shows off his new car. Here we can see Pixar accepting the technology of the time and working on further development of characterisation.

Boundin'. 2004 - A gentle story of a small lamb who dances his short hooves off, until that is he is sheared. At that point he feels he is ridiculed. A wise old jackalope comes along and teaches him that it matters not what we look like as long as we can enjoy ourselves. Here Pixar seem to be modelling flowing water for the first time. Never before seen to this realistic degree in a Pixar production the flow and movement of the water on show here is immaculate.

Jack-Jack Attack. 2005 - The Incredibles takes a leap a little. All previous Pixar animations work on multiple levels, both children and adults alike can enjoy them for different reasons. With The Incredibles though Pixar are firmly reaching out predominantly to an adult audience who would understand the history of the super hero, the endless monologues of the evil one and the almost James Bond like setting of his hidden lair. This short accompanied the DVD release and is a section of the storyline, including Jack-Jack and his hapless babysitter.

One Man Band. 2005 - An astonishing small piece where depth and detail literally rip this off the screen. A story of two one man band players who compete for the coin of a small child. Like all other Pixar shorts, and main features for that matter, this is an amusing piece but the image itself is exemplary. It seems that yet again Pixar push the technological limits and come up with the goods.

Mater and the Ghostlight. 2006 - Like Mike's New Car and Jack-Jack Attack this is the short from the Cars universe. A simple ghost story where all the cars try and scare Mater who continually seems to scare them. Like Cars itself the animation on offer here is pristine and truly reference material. Also on offer here we again see Pixar bring mood into the setting as they did so well with Red's Dream, with light being put to good use.

Lifted. 2006 - In the latest short from Pixar we see a teenage alien obviously sitting some form of Human Abduction exam. Like most of us with our driving tests he's nervous and makes many mistakes, the examiner sitting quietly by clicking his marking pen as needed. Yet another highly enjoyable piece with the hope for many of us Sci-Fi fans out there that Pixar will at some point turn their attention towards the heavens.

These shorts are an absolute joy from a technological, animation and storytelling point of view and to have them all here on one disc eliminates the need to wade through your collection to locate the one you might be looking for at the time. You can play them individually, but why would you when at only 55 minutes you might as well just rip through the entire package. Pixar early on realised that technical know how was not good enough, what was going to set them apart from the crowd was proper storytelling and proper animators. They do nothing but succeed with both their full-length features and this volume of collected shorts.