The Pit and the Pendulum Blu-ray Review

“What are you doing here? Why don’t you go and torture some heretics?” 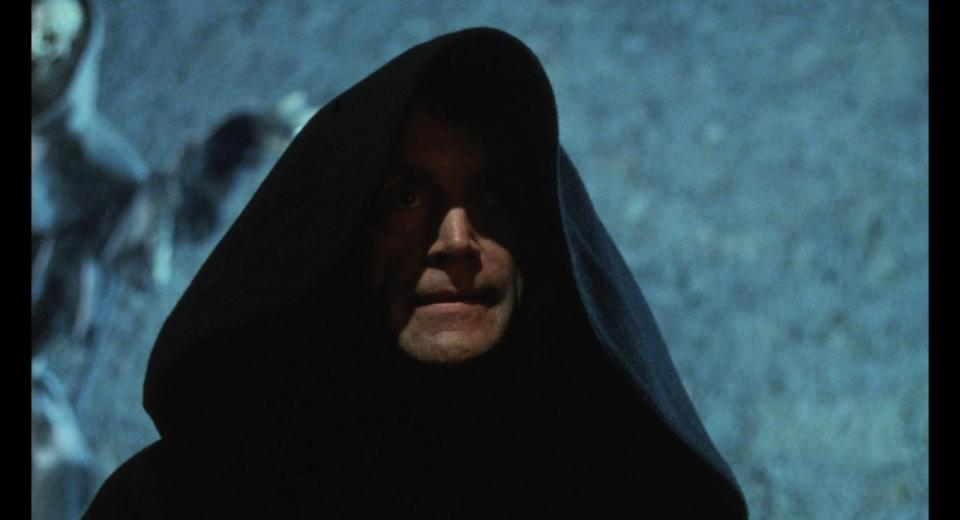 88 Films are not messing around when it comes to their hi-def transfers. They won’t win any awards for gleaming, super-spangly images, but they are taking their source material and rendering it with respect and a pleasing absence of overt digital tomfoolery.

The Pit and The Pendulumis encoded via AVC and presents its image 1.66:1. This UK disc is also region-free.

The overall aesthetic of the transfer is darker than I have seen it before. And that is no bad thing. It looks more authentic, overall, and gains considerable depth and atmosphere as a result. Well, there’s a great deal of footage set down in the dank chambers, cells and halls of the castle dungeons isn’t there? But that doesn’t mean that this isn’t a colourful film at the same time. Costumes, lighting and FX work are often quite vivid and boldly rendered. Not all the time, mind. There are still many occasions when the image looks quite flattened and muted. But then again, flames can be bright and florid, and you only have to look at Ollie Reed’s scarlet robes as the Cardinal to see how well the primaries are presented. Although appropriately gaudy at times, the palette is never over-saturated - in fact, it can be a touch worn and tawdry, though I find this in-keeping with how the film has always appeared. All this said, the image remains warm and engrossing, inviting you to investigate the frame, which almost always has elements of colour splashed amidst the darker shades. The stained-glass window that acts as a spy-hole down into the torture chamber, for example. Skin tones are pleasing enough, and varied, though they can still seem a little sallow at times.

Good, though not great black levels succeed in establishing some mean, thick shadows that add a necessary depth. Definition down in the cells and the labyrinth of tunnels is uncompromised. Torchlight cuts through the gloom with a pleasingly faithful glow, and the deeper shadows remain largely undiluted by grey infiltration, the blacks kept clear of the milky haze that can sometimes waste away their integrity. Thought there are times when the contrast of the source fluctutates, and this can waver the blacks a touch too. I couldn’t conceive of any detail that may have been lost within them either. Contrast, by and large, is fairly well handled, those little fluctutations notwithstanding.

Even remembering that this is low-budget and shot quickly, with Gordon’s typical rough ‘n’ ready attitude, detail is very good. The imagery is both warmly hued and boldly rendered. Faces, eyes and costumes have no information that seems masked or submerged by the transfer. There are threads on show in the robes. Scars from the lash have differing levels of scar tissue. The crags and pores in Ollie Reed’s face are certainly quite starkly exhibited. Striations in the stone walls, grain in the wood, the powder that results from the crushing of bones and the rat-nibbled bits of flesh on our hero’s hands all appear quite crisp, sharp and clearly delineated. The wounds are swift, but sharply depicted, essentially the sliced rat and the crushing of it carcass to extract a bony blade.

I wasn’t bothered by any of its slight artificial sharpening. Grain remained consistently textured, and didn’t seem to clump-up. Smearing wasn’t an issue, and nor was banding. The flickering flames, the deeper saturated colours and the greys and browns kept a smooth surface at all times. Fast action and panning appeared equally as smooth. The scything from side to side of the axe-bladed pendulum had no issues, and the little sparks it elicited as it grazed the stone floor also looked quite clean. There is also a rewarding level of depth afforded the image. Have a look behind the principles to gaze around the dungeons or the town square. It might not offer anything especially wowing, but with a film and an image that can't but help feel somewhat "tighter", there is an agreeable spatiality on offer.

For what it is, and for how this has always looked prior to this hi-def presentation, I have to say that I am impressed with The Pit and the Pendulum has turned out.

There are two options for this title. You can stick with the original stereo mix, remastered in LPCM, or you can opt for a newly created DTS-HD MA 5.1 mix.

There is more dynamism with the surround track, though don’t expect anything too exciting to take place within its slightly expanded soundfield. Separation is revealed, though I wouldn’t say that it was particularly convincing, or natural sounding. Rear effects can be heard, but they aren't worth discussing. The sound design is very limited and low-rent, quite reined-in. That doesn’t mean that there isn’t a complete lack of vitality to it, however. The screams, the slicing of the pendulum, which does offer a fine sweep from side to side, and the impacts of the skirmishing are all perfectly well balanced in what is an unmistakably limited and, truth be told, rundown mix.

Dialogue isn’t dialed-back or lost, and Richard Band’s score, with some Gregorian chanting thrown into the pot, is warmly handled, though never comes across with too much vigour, or sweep.

The stereo mix does well, and maintains clarity, but the surround track has that bit more depth and space to it, which opens-up the dungeon scenes and the moments when the crowds gather around the executions. An early sequence has Antonio chasing after a street urchin who has stolen a loaf of bread from his cart, and this becomes a bright section of spacious activity and boisterousness for music and crowd hubbub. There are canons that are fired from the battlements and some musket-fire, but these elements barely make any impression at all, I'm sorry to say. Bass is pretty redundent throughout. Though, to be fair, I wouldn't have expected otherwise.

In short, there is nothing special here, but then there is nothing overly detrimental either. This is just how I would have expected the film to have sounded without any unnecessary embellishment. Still, I would have loved that pendulum to have swished by with ever-more deadly oomph too, but, as it stands (or swings), you still get the point.

Nothing to get excited about, then. But nothing to be all that ashamed of either. Plus you get the choice of original or revamped audio to pick from, although I wouldn't say that there was that much between them.

Honestly speaking, this can't gain more than a 5 out of 10. Stuart Gordon is once again, after recently celebrating BD releases of Re-Animator, From Beyond and Castle Freak, on hand to offer his thoughts about this 1991 production that, at the time of release, didn’t really fare all that well, but since gained some better established popularity.

To be honest , this isn’t a very inspiring set of features. We don’t get a commentary, which would have been great. Gordon’s interview, in The Inquisition of Stuart Gordon, is only brief, although there is some interesting material regarding Henriksen and Ollie Reed, and the trailers for this and Castle Freak are pretty humdrum.

We do, however, get a 26-minute Videozone episode about the making of the film, which interviews all those involved and shows us some makeup effects being created. Shot on-set, this is frequently very amusing, and certainly a fun antidote to the usually dire EPK drivel that we get. This also contains some bloopers. But the problem with it is that it doesn’t just focus on Pit. It brings in other films too, a couple of which have already had their say, in this way, on their own BDs and then we get a fan-merchandise and club section. It is all very interesting, to a degree but something more retrospective and comprehensively dealing with the film in-question might have been a better addition to the obviously enthusiastic attitudes on offer during this contemporary and promotional production.

There is also a booklet from Calum Waddell that contains interviews with Stuart Gordon and producer Charles Band, as well as the now commonplace reversible sleeve. In the case of the reversible sleeve for this title, there really isn’t much of a choice to be made, since both renderings are, to all intents and purposes, identical.

Well, we get some extras, which is great. But this isn’t an inspiring selection. After a slew of basically disregarded minor horror/fantasy projects, Stuart Gordon made a valiant attempt to regain his former notoriety.

Gaining genuine European locations and real castles in which to shoot was a definite boon, but Castle Freak, despite its cult status never quite hits the mark, and The Pit and the Pendulum, whilst at least swinging in a more favourable direction as far as I am concerned, only barely registered with anybody outside of the Full Moon fanbase. It is a shame, as this is a finely produced, elegantly mounted gothic thriller that combines an intimidating performance from a conscience-stricken Henriksen, lavish art direction and fine location work, a strongly moralistic yet fantastical plot, and some fruity comedy asides courtesy of Jeffrey Combs. Oh, and Ollie Reed as a crimson-clad cardinal and an exploding witch can’t go amiss either.

It is only loosely Poe, but then that has never stopped a hundred other filmmakers adopting his name and titles. And when it comes to the titular torture device, the film ratchets up the suspense considerably and provides a terrific set-piece.

The transfer is a fine enough one for those who know the material and understand its shortcomings. Rough round the edges, but still clean, sharp and detailed and boasting good enough fidelity, 88Films have delivered a low-budget shocker quite faithfully. As usual, I would have liked more extras, but we do get a fresh interview with the cult director and an interesting, if rather wayward vintage featurette on the making of the film.

If you follow the Full Moon movies, then this is a must. It is certainly better made than a whole host of them, and it also serves as a vivid historical romp through heresy, witchcraft and the ever-popular Inquisition!

Just remember … you can’t confess if they’ve cut your tongue out. It’s like a Dark Age version of the bloody Kobayashi Maru Test, isn’t it?