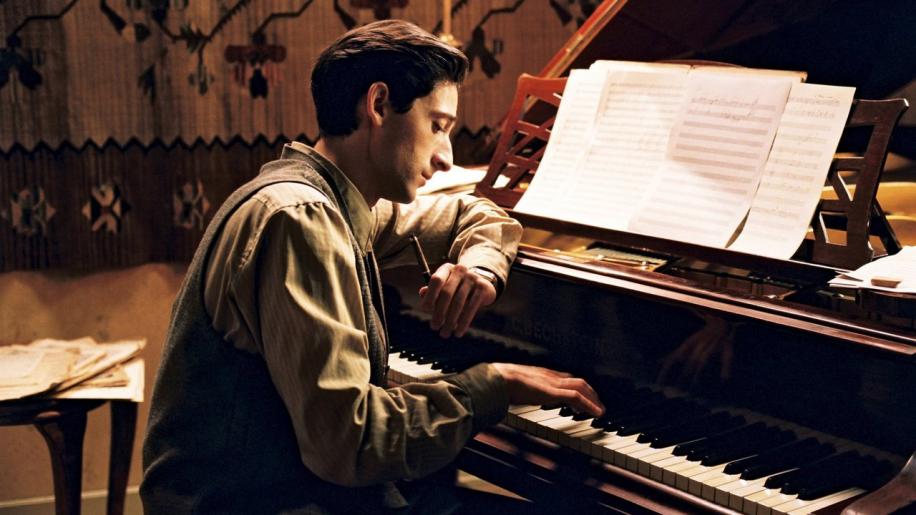 Shot primarily in muted, muddy palettes, this 1.85:1 anamorphic transfer brings to life the Warsaw streets well. The colours are well saturated, with the grimy ghetto streets and ragged clothes looking authentic and well defined. Shadows - which feature highly on this print - are rendered well, adding depth and a good level of contrast, with little in the way of digital artefacts present. In fact, there were only a couple of instances where noise on the print was obvious, one being where the Szpilman family first enter their ghetto house (look at the walls). Aside from this, however the print looks clean and detailed with no scratches or dirt present.

Overall this is a good transfer, perhaps not quite as sharp as some other recent releases - a little softness is noted at times, particularly in long-distance shots, and edge enhancement raises its head every now and again - but competent nevertheless. Presented in 448kbps Dolby Digital 5.1, I found the opening to The Pianist slightly troubling. In the first few minutes I found the vocals to be difficult to make out, with the centre channel sounding muddy and somewhat overpowered by the other channels (this was viewed on a calibrated speaker system). Thankfully this changes rather quickly, but I'm still pressed to work out what the initial dialogue was!

I say the change is swift, and indeed it is, because the centre channel rather dominates this film, and largely comes across as clean and detailed with vocals locked firmly in place. The main channels bear the brunt of the action when it does occur, and does so relatively well. Gunshots and explosions are clean, precise and suitably loud, and reinforced by the LFE channel which, throughout the majority of the running time, remains rather quiet. However, there are moments when it does bark into life, and it underpins the onscreen action well.

The surrounds however, remain a missed opportunity on this DVD: the sound engineers clearly weren't on top form on the day they mixed this, as there are so many moments where you expect sounds to be coming from behind you...but there's nothing. Everything is largely locked to the front, and whilst reasonably effective, I couldn't help but feel more could have been made of the other channels.

That said, there are a couple of interesting moments, the most obvious being where a tank shell lands close to Szpilman and he is momentarily deafened: the effect across the soundstage is immediate and striking, with ringing assaulting you from all sides. Evocative it certainly is, and certainly adds to the experience, it's just a shame the rest of the soundtrack is little more than average. It's also worth noting that the R2 edition is missing the DTS track which is present on the R1 version. With just the movie taking up the first disc, one would expect the extras disc to be overflowing with content. Not so in this case, although what we do get - and this far outweighs the padding you often see on DVDs - is a thoroughly interesting and thought provoking documentary on the making of the movie, devoid of the usual promotional puff. Mainly narrated by Polanski himself, it deals much with the history behind the movie, and Polanski's own experiences, and runs for 40 minutes.

Whilst the documentary is excellent, sadly the rest of the extras are rather bland and run-of-the-mill, and at worst pointless. We have a selection of stills (why oh why oh why?), plus a theatrical trailer and the usual cast and crew bios.

Overall, it's disappointing given this is a 2-disc edition but regardless, the documentary is an excellent watch.