The Phantom Of The Opera DVD Review 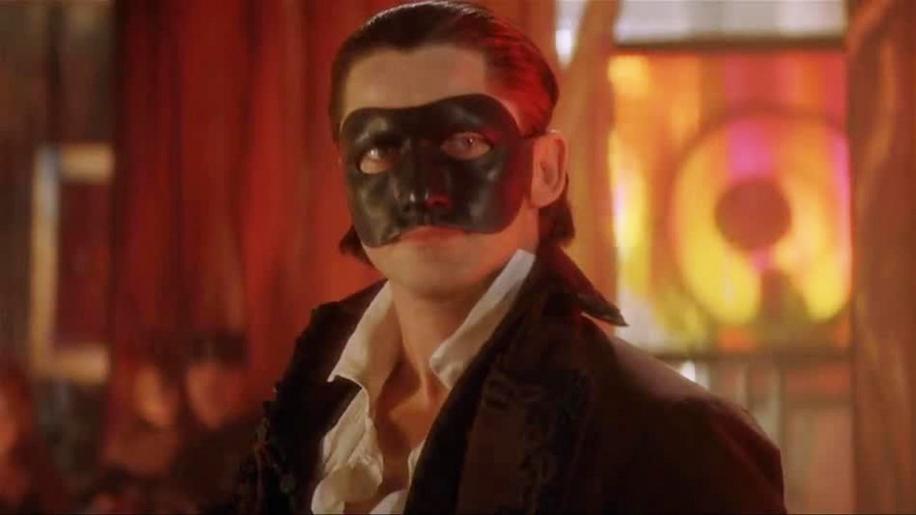 Quite simply a beautiful image throughout. Much of the movie is set in dark, shadowy settings and anything less than a superb transfer would have resulted in a muddy, lifeless look. Thankfully what we have is an image filled with detail in even the darkest scenes. Colours are rich and velvety and edge enhancement is all but absent.

Blacks are deep although not the deepest I've seen. They have a slight orangey redness to them, probably intentional to create that 'candlelit' ambience felt throughout the Opera house. Grain is low although not completely absent. Overall a fine picture that helps draws the viewer deep into the movie in a way that is subtle but unmistakeable WOW!! This is one of the very best movies I've heard and I've heard and reviewed some real sound heavy blockbusters! The Dolby Digital 5.1 and more importantly, the DTS soundtrack in this movie are worthy of the term 'reference quality'. The film opens with a fairly light aural assault until about 5 minutes in when you will do two things - 1) Jump out of your seat with fright and 2) scramble for the volume control. It has a dynamic range I've not heard before and the way it makes you feel like a member of the Theatre audience is quite amazing.

LFE effects are prominent but not in a way that fills the soundtrack with a bass that booms and wallows. Rather a tight, visceral bass that you feel rather than hear. Channel separation is also first class and full use is made of all channels throughout. Centre channel voicing is clear and crisp with good tone. Obviously voices play a very prominent role in this movie and they have paid much attention to ensuring that they sound perfect. If you're after a demo disc to blow you away, look and listen no further. Not an endless amount to choose from but what is present is incredibly detailed, informative and fascinating. The extras are split into two sections. We have 'The Movie' and 'The Show' which are self explanatory and I'll cover The Movie section first

The Making of The Phantom is probably the most interesting 'Making of' featurette I've seen. It goes into great detail of both the history of the story itself and the epic task of recreating it on the screen. We are shown how the Opera house is recreated and how 1911 Paris is brought to life with amazing success. Along with showing us how the magnificent sets where built and how the cast were chosen, we also have interviews with many of the most important people who contributed to the making of this movie. This section alone is worthy of high praise as bonus material but there is more.

There is also a section on Production which has several smaller featurettes covering such topics as Special Effects, Costumes & Make-up, Music & Recording, Editing, Visual Effects and Swarovski. 'Production Stills' are a scrapbook of photos from the making of the movie. There are also two Easter Eggs on the Movie page both are selected by highlighting the two red, square motifs on the left of the page. One is Emmy's screen test and the other is Gerard singing a song from the movie

'The Show' section has a featurette on The Story of the Phantom tracing the history of this tale. There is also 'The History' which is like a family tree tracing the original story through the film adaptations made and the stage show. Finally we have 'The Music' which gives us a selection of music videos starring Sarah Brightman along with other artists such as Cliff Richard , Steve Harley and of course Michael Crawford. The only thing lacking really is an Audio Commentary which would have been nice with Schumacher and Webber telling little anecdotes of how they came to make this epic. What can I say. This is not the kind of movie that you'll either love or hate, it's the kind of movie that you can grow to appreciate for the work of brilliance that it is. Certainly it will not be to everyone's taste and I didn't think it would be to mine. But when you consider the amount of talent involved, the direction, the production, the music, the voices and the acting. You are hard pressed to call it anything but impressive. Like I mentioned earlier, it is not one of my favourite movies of all time but it is definitely a movie I'm glad I have seen and that about says it all.