"Friends are the family you choose." 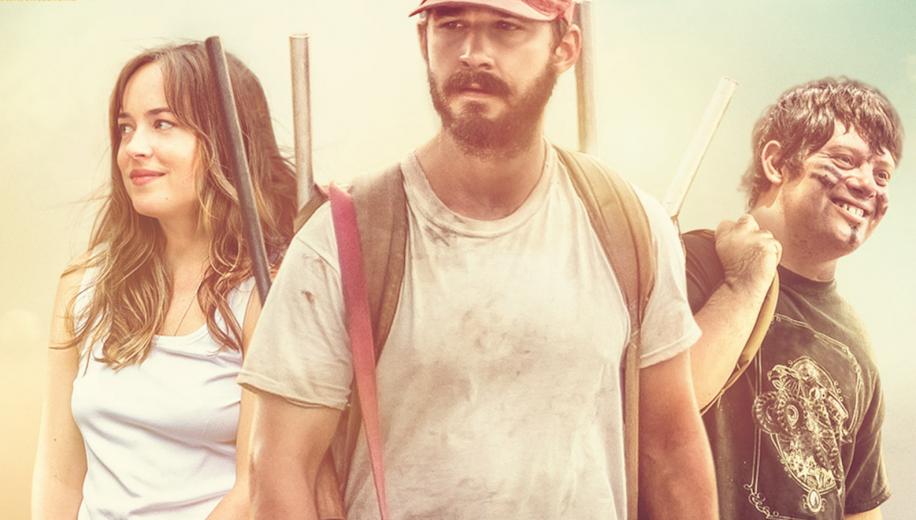 This superb road movie has Shia LeBeouf on fabulous form in a heartwarming coming of age drama.

Rightly celebrated for its positioning of an actor with Downs Syndrome in a very prominent role within a movie - arguably for the first time - this is also something of a comeback for LeBeouf, who has had a shaky up and down career, finding grace in a low key indie piece that has some real heart to it. The Peanut Butter Falcon came from nowhere - a proof of concept piece pitched off the back of the debut of this kid from acting school with Downs Syndrome - and rollercoastered into a beautiful road trip which set the Festival Circuit alight.

The story has Zack Gottsagen as 22 year old Zak, stuck in a retirement home but desperately planning his next escape, and running across LeBeouf's Tyler, himself on the run from John Hawkes' (Deadwood) thug, having made his own bad decisions following the death of his brother (The Punisher's Jon Bernthal). The two form an unlikely bond as Tyler elects to help Zak on his quest to meet his idol - wrestler The Saltwater Redneck, confusing Zak's carer, Eleanor (Dakota Johnson - Bad Times at the El Royale) who clearly perceives Zak as needing to be treated in a certain way.

Filled with warmth and authentic feel-good moments - as well as a decent amount of emotional drama, largely served by some subtle but effective flashbacks, but also courtesy of the imminent threat that's chasing them - The Peanut Butter Falcon rides high on the excellent chemistry between LeBeouf and Gottsagen, and to a lesser extent some decent chemistry between LeBeouf and Johnson, whilst a slew of familiar faces colour in the fringes superbly - from Bruce Dern's (Once Upon a Time in Hollywood) fun fellow retirement home resident to Thomas Haden Church (still remembered for Spider-Man 3) as the wrestler that Zak is inspired by, with the likes of Hawkes at his sinewy best, and Bernthal working well with a basically non-speaking flashback role. It's actually a very well put-together cast, who support LeBeouf and Gottsagen, eliciting some heartfelt performances in a noteworthy writer/director debut (from Tyler Nilson and Michael Schwartz) that deserves to be seen. Recommended.

The Peanut Butter Falcon comes to Region B-locked UK Blu-ray courtesy of Signature Entertainment, who deliver it with a largely excellent and hard to fault 1080p/AVC-encoded video presentation in the movie's original limited theatrical aspect ratio of 2.4:1 widescreen.

Detail is very good throughout, enjoying the sun-kissed environments, the sandy beaches and weathered visages, as well as the worn and dirty clothing; it's a tough trek of a road movie and the characters certainly looks like they've been through the wringer, with a presentation that picks up on every nuance and texture afforded by this. The colour scheme is also informed by the location, and whilst there are plenty of faded, sun-beaten tones on offer, there's also a warm vibrance to the natural greens in the landscape, and skin tones look suitably healthy beneath all that dirt. Black levels are strong and round out a very good video presentation indeed.

The accompanying DTS-HD Master Audio 5.1 track is also very good, perhaps not quite as technically proficient as the video, but nonetheless doing its best with the, at times, limited material, revelling in the nuance and subtlety - and sheer quiet - of some sequences, and bringing the background environmental tics to life in order to craft an authentic atmosphere.

Dialogue remains well prioritised, and it does take a minute to get used to Gottsagen's distinctive intonation, but it's certainly rendered with clarity and coherence for the most part, and disseminated largely across the frontal array. Effects are, as aforementioned, predominantly atmospheric, although a few more noteworthy noises spark up some interest, from a booming shotgun blast to revving boat engines and a growling 6 litre car. The score compliments the emotional undercurrent without ever being overly intrusive, and rounds out a very good track.

Well worth checking out

Taking the festival circuit by storm, The Peanut Butter Falcon is more than just a gimmick designed to shine a spotlight on a niche and underserved minority in the film world, boasting a number of great performances, not least from newcomer Gottsagen. The UK Blu-ray release is utterly bare bones, but at least sports excellent video and audio, and the film itself is well worth checking out.
﻿