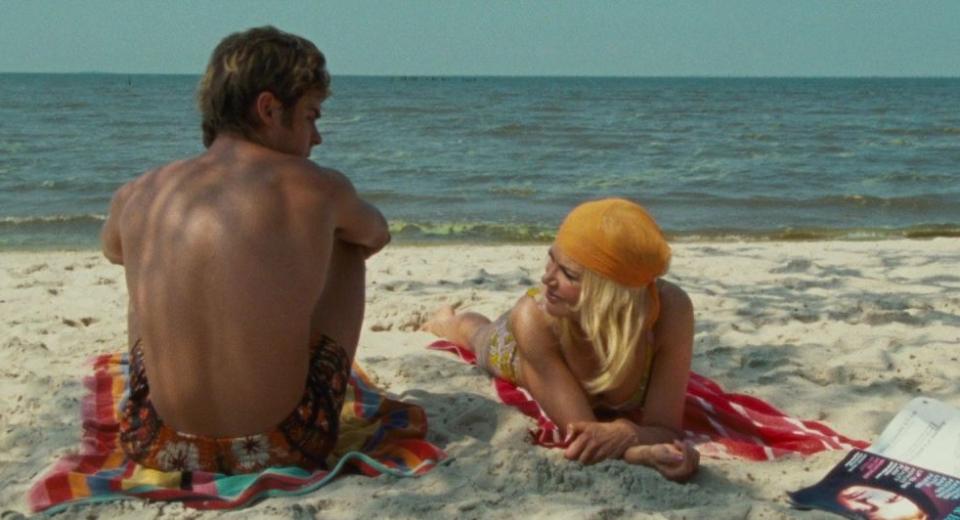 The Paperboy comes to UK Region B-locked Blu-ray complete with a strong 1080p/AVC High Definition video presentation in the movie’s original theatrical aspect ratio of 2.4:1 widescreen. Shot on Super 16, the stylistic choices of director Lee Daniels and cinematographer Roberto Schaefer are distinctive, to say the least, and require you to be somewhat forgiving towards what clearly must be an intentionally degraded aesthetic that they were going for. The image is muggy in the extreme – with a thick layer of noise prevalent throughout, and a fair amount of ensuing perceived softness – as if it had been filmed in the period in which it was set, and nobody bothered to clean it up to produce a new master. Similarly the contrast has been pushed to reflect the unforgiving swelter, and this too aggravates the situation. However, despite these potentially damaging stylistic choices, and whilst – as a result – this will clearly never be a demo-worthy feature, the image is probably entirely faithful to the filmmakers’ intentions and, more importantly, it works extremely well to reflect the dirty, grimy and eminently gritty subject-matter. The colour scheme, also affected by the rampant contrast levels, is similarly reflective of the era in which the narrative is set, and, overall, this is a respectful if far from reference standard presentation. However, when you come to see the movie, you might find that that is for the best.

On the aural front the accompanying DTS-HD Master Audio 5.1 track may not strike out with any noteworthy boisterousness, but it still suits the lurid, swamp-set material perfectly, and also proves more than a match for the US release’s Dolby TrueHD 5.1 mix. Dialogue comes across clearly and coherently throughout – as you would only expect – largely dominating the frontal array where appropriate, and the period-track-dominated score allows some expansion over the surrounds, and even a smidge of LFE input. Effects are limited and entirely atmospheric, but we do get a few nice moments – the waves crashing during the beach scene, and the general water-related effects during the swimming sequences; the buzzing of the boats through the swamp, which is so teeming with wildlife that you feel like checking your living room for everything from mosquitoes to gators. Whilst far from expansive and, far from demo-worthy, it’s a nice accompaniment to the piece that perfectly suits the material.

Just a couple of options, although in terms of Interviews, we do actually get contributions from most everybody involved.

Featurette
The Making of The Paperboy runs at just 6 minutes in length and isn’t in the least bit weighty, providing a smattering of on-set cast and crew soundbites (culled from the interviews below), put together to paint a fairly loose overview of the picture, with no real depth whatsoever. Still it is nice to hear from the relevant players, although the subsequent Interview segments are far more satisfying (and there’s plenty of overlap) and are not as dominated by clips from the final feature.

Interviews
Everybody important contributes, in a selection of no less than nine cast and crew Interview segments – Director Lee Daniels, Producer Hilary Short, and actors John Cusack, Nicole Kidman, Matthew McConaughey, Zac Efron, Macy Gray, David Oyelowo and Scott Glenn. Totalling 21 minutes, and available with a Play All function, these offerings cover everything from the inception of the project and the source material to the filming and locations; from the casting, characters and performances, to the key sequences.

Dirty, sweaty, hot and humid, this intoxicating noir-infused feature is a strong third outing from the director behind Precious, Lee Daniels. Driven by excellent performances from the likes of Nicole Kidman, Matthew McConaughey and John Cusack, even Zac Efron follows suit and blends into the gritty, grimy, swamp-based murder mystery. Although certainly not to everybody’s tastes, and brimming with sexual deviance, striking violence and generally unpleasant characters, there’s something really quite enticing about The Paperboy – it will draw you in as much as it will disturb you.

On Region B-locked UK Blu-ray we get very good video and audio as well as a decent if limited selection of extra features – fans of the film should consider this a solid purchase, whilst those interested should certainly consider a rental to see if you’re seduced into the sweaty swamp.