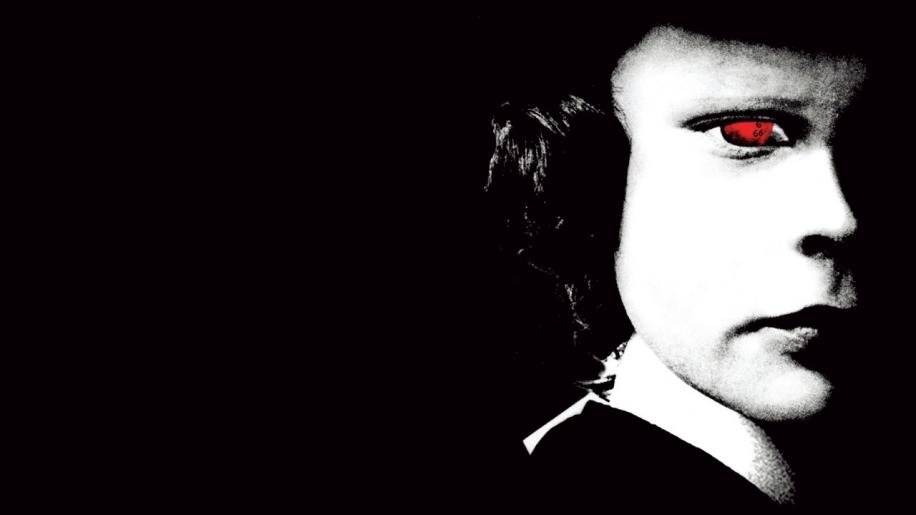 The good news is that the transfer has been spruced up quite a bit from its last disc incarnation, revealing a lot more detail throughout, a cleaner, sharper image and a much more rewarding viewing experience all round. Blacks are much deeper and more solid, skin tones are more natural and realistic than before and, despite a fine layer of grain, the image is remarkably clean, stable and detailed. Colours are well presented, without being over-saturated and there are no signs of smearing or the edge enhancement that blighted the previous release. The anamorphic 2.35:1 transfer shows off Gilbert Taylor's compositions immaculately with good, long-reaching detail held across the image and far into the backgrounds. There are some great wide-angle gems to look out for - such as the view behind Robert Thorn out of the windows of his corner office suite, the great image of Cathy looking up the great staircase towards the spidery form of Mrs. Baylock perched on the landing, whilst Robert loiters way down at the other end of the ground floor hall or the marvellous close-up of Father Brennan sitting on the bench by the Thames whilst Robert strides down the path towards him.

The overhead shot of Jennings and Thorn as they make their way through Bugenhagen's excavation site reveals a lot more detail in the dusty ruins than was available before, bringing some of the collapsed masonry into sharp relief, but this extra sharpness still exhibits some slight shimmering. Early on there are some very minute judders that affect some portions of the image in isolation - Peck's face, neck and shoulders during the opening scenes at the hospital - but these do not last long and the effect does not reappear again.

I wouldn't recommend upscaling this standard DVD though for, although there is a definite enhancement in detail and clarity, the discovery of a couple of thin horizontal lines about a third of the way down the image proves much too distracting. Once you've seen them, you can't take your eyes off them.

But, considering that this film is now thirty years old, the image showcased here is nothing short of splendid.

There's more good news with the audio for this revamped edition, too. Finally, The Omen gets a full surround remix. Normally, I find the jazzed-up 5.1 mixes ladled over the top of older movies a tedious, unnecessary or downright insulting affair but, although the new multi-channel track created here is neither showy nor all that aggressive, the opening-out of the soundfield adds nicely to the atmosphere and the mood of the film. To my ears, there is nothing that bleats out unnecessarily or announces itself in a bogus fashion that shouts out “Hey, listen to me - I'm a rear speaker that's actually active in The Omen!”

Obviously, the element that gains the most from this makeover is Goldsmith's score, which sounds very clean and crisp, with a firm weight behind its demonic compositions and a soothing warmth to its quieter, more intimate moments. Dialogue is always clear and well presented across a reassuringly wider front soundscape. Occasional split effects grace the set-up, with the best moments coming courtesy of the storm that pursues Father Brennan - the wind and the lightning rattle quite emphatically from the rears, creating a pretty effective atmosphere and the spire-plunge has some terrific weight added to it. The musical stingers have a much greater impact than they did previously, with Mrs. Baylock's frenzied attack and the dogs in the graveyard possessing more exciting dynamics. Likewise, the trundling of the truck and the subsequent head-lopping for poor Jennings - just listen to that shattering glass and the terrible scream from one of the onlookers.

Finally, the original mono track is reproduced here as well, although I would stress that this 5.1 remix is actually much more engrossing and really does add to the mood of the film, without being disrespectful in the least.

Well, there's more here than you can shake a satanic stick at. The last release of The Omen came with some good stuff, but this version, incorporating all of those extras, adds considerably more to the pot.

A brief Introduction from Richard Donner sets the scene in a quite matter-of-fact sort of way and is all the more surprising in that it can actually be found over on Disc 2, when surely it should have been, you know, just before the film. However, a couple of trailers aside, the main extras on Disc 1 are two chat tracks. Lifting over the same commentary from Richard Donner that graced the R2 Omen Trilogy edition - and a good one it is, too, even though it is sometimes a little raspy, dry and technical - and adding a further one that teams up the director with screenwriter Brian Helgeland (Man On Fire, A Knight's Tale, LA Confidential), the film is actually quite well examined. Editor Stuart Baird is on hand during the first track to lend his memories to the troubled shoot, and Helgeland probes a little deeper into the meanings of the story's heady and theological themes even if, for a lot of the time, the two friends just bounce jokes and good-humoured deprecations off each other.

Disc 1 also carries the Curse Or Coincidence featurette (6.20 mins) that also appeared on the earlier release. Chronicling the mind-boggling series of weird incidents that plagued the shoot - IRA bombs, lightning hitting the plane twice, accidents on-set, baboon antics and the wholly frightening tragedy that befell special effects man John Richard and his girlfriend as he was filming A Bridge Too Far - this is extremely thought-provoking stuff, going far beyond publicity hype and sensationalising. Donner doesn't believe in the curse at all. Check out producer Mace Neufield - he's a deadringer for Mickey Rourke!

The next piece, entitled Jerry Goldsmith Discusses The Omen Score, is something that I would normally have raved about. But sadly, this is just a slight reminiscence from the great man (one of the most successful and prolific film scorers ever) in the months that led up to his death. Resembling the Fast Show's Rowley Birkin QC, he gesticulates, slurs and rambles, but it is great to hear him discuss his monumental contribution to the film's success. Several key cues are referenced - Love Theme, Damien To Church, The Dogs Attack, 666 & Mrs Baylock - and with a Play All option the feature runs for 17.36 mins. The only way to really appreciate his score for itself is to get hold of that soundtrack. All of the scenes featured here are accompanied by dialogue and effects. The Dogs Attack - a really effective cue - is contextually ruined for the purposes of this feature because the dogs are continually barking and growling all over the track.

Disc 1 is rounded off with the film's original trailer (2.20 mins) and trailers for the cool Nightwatch, the brilliant 28 Days Later and the totally naff Hide And Seek.

Disc 2 houses most of the meat of the matter.

The documentaries that follow - 666: The Omen Revealed and The Omen Legacy go a little deeper into the production and the franchise as a whole. Omen Revealed (46.00 mins) is a great, though clip-heavy, retrospective making of that features all of the main men behind the production of the film. David Seltzer proves to be likeable and he delivers a simple but effective account of how the story came about and how he adapted the biblical text to suit the world of politics as he saw it. There is good about the casting. I like the way that they say David Warner developed his character of Jennings - he was playing a photographer, of course he developed it! Donner is very workmanlike, very low-key, but he becomes greatly animated when he talks about the infamous decapitation scene. All agree on how expert editing and timing garnered the best shock of all.

The Omen Legacy is a mighty, feature-length documentary (full length here on R1 at 102 mins) that is narrated in over-the-top hammy fashion by Jack Palance (his daughter Holly plays the nanny who hangs herself). Basically, this covers the original film, its two main sequels and the lousy TV film, as well as the background to all the productions, the casting and the influence that the saga has had. There is behind-the-scenes footage, discussion about the woeful TV pilot that was made with a view to getting a series optioned, and copious interviews with Richard Donner, Harvey Bernhard, Mace Neufield, David Seltzer and actors David Warner, Lance Henriksen and Lee Grant from Omen 2 and Lisa Harrow from Final Conflict. We also get some theological debate from barking mad Satanist Blance Barton and Catholic priest Dr. Felix Just. The whole thing proves pretty entertaining, but is not quite as comprehensive as it would like to be, with far too much attention bestowed upon the lousy 4th instalment.

The Deleted Scene runs for about 1.30 mins and is in rough, damaged stock. Detailing an alternative escape from the house with Damien in tow, this reveals a more violent attack by the dog on Thorn's car and the beginning of what would have been a nastier end for Mrs Baylock. The original audio is missing and we are treated to a commentary from Donner and Helgeland instead.

Then we get a Stills Gallery that covers some poster designs, behind-the-scenes shots and cast photos.

And then we have the Screenwriter's Notebook, which is David Seltzer going over the genesis of the story once again. Running for 14.50 mins, he gives a more heartfelt (financial) explanation as to why he took on the project. With discussion of his inspiration, religious studies and political notions, Seltzer manages to add some more texture to the film's colourful backstory.

And finally we get An Appreciation: Wes Craven on The Omen. Running for a surprisingly meaty 20.15 mins, this is just the filmmaker doing essentially what I've done here - heaping praise and opinion on a horror movie that he loves. He manages to go through practically all the components that went into making the film the classic that it is and provides insight into why he thinks it remains so successful today. Richard Donner is singled out for a lot of kudos - particularly for his work with the baboons and how he provided a shocker with such stateliness in terms of filmic techniques. It is a smart piece overall, from a guy who knows what he's talking about. Or used to, anyway.

The Omen is a classic movie and thoroughly deserving of this array of extras. The earlier release didn't do so badly, but this is a much better and more comprehensive examination of the cult movie.

The Omen is horror film royalty. Pitch-perfect direction and editing, a soul-chilling score and performances that have become utterly indelible all add up to a satanic event-movie that stands the test of time, defeating the effects of diminishing-return sequels and an ill-advised remake. Surprisingly, the years have been kind and the film still feels slick, well-produced and important. The disc offers up a greatly improved image and a reasonably successful surround sound mix and is filled out with a comprehensive roster of extra features. The commentaries, features and transfer all add up to a terrific package that begs to be on every horror-lover's shelf. Perhaps inevitably there will be a high-definition version along at some point but, for now, this is a spot-on release that clearly reveals, and benefits from, the work that has gone into it.

A classic which I recommend whole-heartedly.