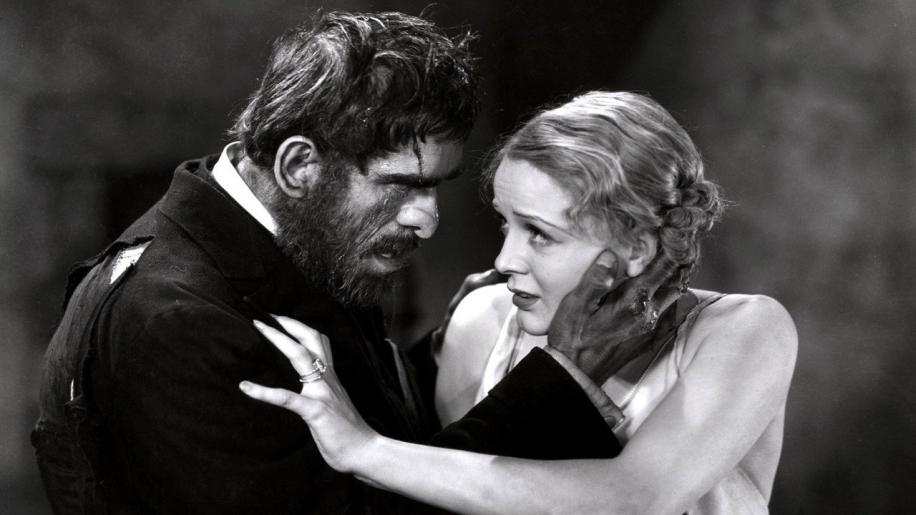 Starting off with a vertical cropping down the left hand side of the screen for a moment during the opening credits, The Old Dark House then settles into its full screen 1.33:1 image. As is to be expected for a film from 1932, there is copious damage to the print and, even then, having resided for a long time without proper care, the resultant image is of a much inferior quality to that of, say, Whale's own Frankenstein from even earlier. But the vast amount of nicks, scratches, jumps and judders don't detract at all from the atmosphere of the feature. Still, there are instances where the picture skips a frame or two and contrast glitches manifest themselves with almost gleeful abandon about the screen.

Blacks and greys are nice and solid enough, holding the darkness and the swirling shadows in place. Faces and eyes manage to shine despite some bright whites that can warp them. Detail is compromised by the age of the print and the damage that scores it, but still allows for lots of intricacies about the house. Karloff's brutish visage is very well rendered, always appearing deep, dark and sinister. The flames of the fire and the illumination from lamps and candles manage to poke through the gloom with realistic ease, although there are some issues with flaring.

It might actually be a quirky kind of fun to try to spot all the different types of scratches and flickers dancing across the screen. Only kidding, folks. It really is just great to see the film at all and there is nothing here to put you off purchasing it. The low mark is for the actual appearance of the print. The digital transfer exhibits no errors but when compared to a modern release, it would be impossible to grant it anything higher, despite the restoration. The film suffers a lot in the audio department as it can be quite muffled and low. Although you should still be able to hear every word, every creaking door and the raging wind and rain hurling abuse at the titular abode, you will almost certainly have to crank up the volume quite a bit to reach a comfortable level. There are a few crackles, pops and warbles on the track but, overall, this is a sterling effort of acoustic retrieval that, if anything, only adds to the vintage atmospherics. I've heard worse, that's for sure. That other lost Karloff movie, The Ghoul, for instance. Just don't expect miracles. With this release we are treated to a chat track from film critic/historian and novelist Kim Newman and critic Stephen Jones that is very entertaining stuff. I know that a lot of people don't like Newman and find his slightly plummy enthusiasm really irritating, but I've always enjoyed his opinions and his ability to dish out the facts with a healthy dose of humour as well. This commentary also benefits from the contribution of Jones who's on fine anecdotal form and, together, the pairing makes for a lively, all-encompassing banter that dissects the movie, the cast and the influences it and they all had upon the genre. Newman is the only one of the duo to have actually read Priestley's original novel and is able to point out the deviations made in the film, as well as the many elements that Whale and screenwriter Benn W. Levy and dialogue-sprucer R.C. Sheriff decided to keep. Both have a fine old time of it, their obvious affection for Whale and the new ground he broke with his classic movies keeping the track engaging, informative and worth another listen.

Kim Newman also provides a few production in the short, but well put-together commemorative booklet that accompanies the release.

The Image Gallery, which runs for 1.09 mins contains some atmospheric, excellent quality stills, though, sadly, not that many.

And the Archive Interview with Sir Ian McKellen regarding his performance as James Whale in the brilliant movie Gods And Monsters (1999) is actually quite a let-down. Culled from the Tonight show from 11/2/99, the great Sir Ian, then fresh to big screen productions (yeah, it's hard to imagine him pre-Gandalf and Magneto, isn't it?) is there to give a little background upon playing the eccentric and troubled director in his dwindling years. Running for 5.40 mins, this piece is not that good, really. It doesn't have much relevance to The Old Dark House and the stuff about Gods And Monsters is fairly brief and glossed-over. McKellen is articulate and pleasant enough, but the whole thing feels a little pointless. Just a piece of filler, folks.

So, the Commentary is the grabber in this set. Just as well it's a good one, then. The Old Dark House is an excellent film. It doesn't so much follow the genre clichés of spooky mansion flicks, as set them in stone in the first place. The trend would go to incorporate many terrific movies, but it is great to see the one that started it all. The transfer is very acceptable indeed without any defects on the digital side of things to speak of, but you have to make allowances for the age and condition of the source print. Extras-wise, there isn't much here, which is a shame. But the commentary is excellent and well worth a listen, providing a boundlessly comprehensive background on the making of the film, its historical genre relevance, lots of enjoyable anecdote and opinion.

But it is just great to see such a rare movie getting a release at all. The Old Dark House is classic of its kind and definitely belongs on any horror afficionado's shelf. Highly recommended.