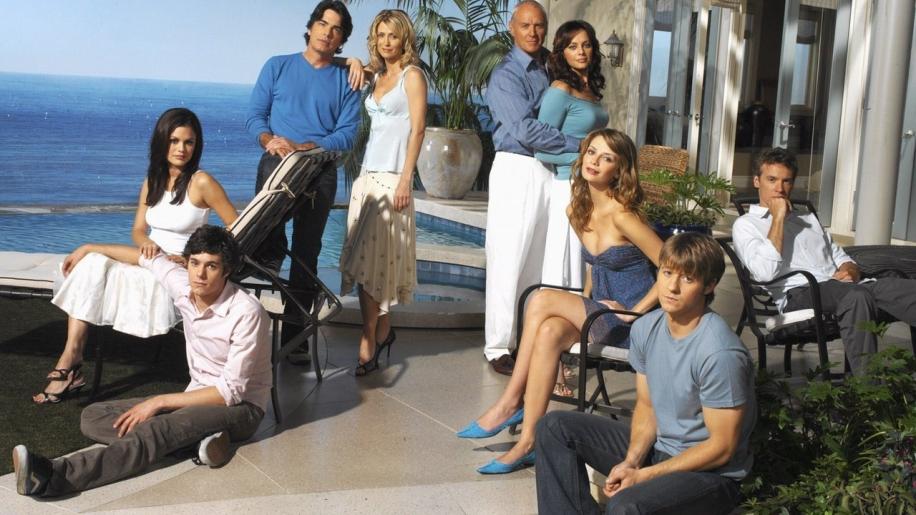 The O.C. is presented in a 1.78:1 aspect ratio anamorphically enhanced transfer that largely looks very good considering its TV origins. Sure it still exhibits all the traits of most standard glossy TV series' like Dawson's Creek or Buffy the Vampire Slayer, but it nevertheless looks perfectly watchable, with good detail, negligible softness and no noticeable grain. The colour scheme is fairly broad, mostly biased towards sun-drenched settings and attire, coming across as warm throughout. The blacks are also reasonably good, with solid contrast even during the nighttime scenes. When I got first season, it only had a full screen transfer so this widescreen presentation is a distinct step-up and should please most fans. The audio track is a perfectly reasonably Dolby Digital 2.0 Surround Stereo mix, occasionally even feeling like a vibrant 5.1 track desperate to break free from its limited confines. The dialogue is never less than clear and always at the forefront and the incidental score tinkers along in the background without ever interfering with the important drama that is evolving. There are even one or two ambient effects, offered with little directionality, but the biggest selling point has to be the indie bands which populate the soundtrack - whether actually introduced into the episodes during live gigs (like the Killers) or merely used to add emotion to a particular scene, they make this one of the best TV soundtracks you will come across. First up we get commentaries on two of the key episodes in the series - The Chrismukkah that Almost Wasn't and Rainy Day Women. Various crew members pop up to interject their opinions - from the creator Josh Schwarz to the producers Bob DeLaurentis and Sandy Savage. They talk about the alternative concepts, the darker storyline and the surprises in store, noting the brief extended moments in the extended cut of Rainy Day Women. Neither commentary is that interesting, although it is quite a nice added touch. The shame is that they don't go to any effort to make up for the fact that there are only two commentaries, instead remaining scene and episode-specific almost throughout.

The extended and purportedly unedited cut of Rainy Day Women is nothing particular to write home about. What we're talking about is a teen lesbian kiss and this version sees a slightly longer lingering on the kiss in question, but little else. I'm not going to divulge who the kiss is between but suffice to say, it's no Cruel Intentions moment. It's just a kiss and as the commentators state on the audio track, was it such a big deal that they had to cut it? All of the rest of the extra features are to be found on the seventh disc.

Beachy Couture is a fifteen minute featurette on O.C. fashion. We get short interview snippets with many of the main cast members and a few of the relevant designers from the crew and get to look at the rooms full of the attire from the show. Each character is discussed in turn and we get some cross-comparisons across seasons but this is really quite a shallow, vapid featurette.

The OC 'obsess completely' thirty minute featurette is a slightly strange production about what goes on behind the scenes. It is initially ludicrously glossy and limitlessly fluffy, with a really irritating voice-over man to boot, but it does boast a great deal of insight into the lives of the cast before they joined the show, anecdotes of on-set antics during the first season and some ideas for the second season. Despite a terrible introductory section, this is actually probably the single most informative extra feature in the set and worth a look.

We get ten minutes of gags and goofs from the first seasons and twelve minutes from the second. Interspersed with really irritating and pointless animation, both sections take a little while to get interesting but eventually cannot fail to entertain - particularly with Seth's gag-explosion, his dad's extended yoga-lates gag and plenty of driving and golfing antics. It's well worth your time and sure to garner a few laughs. The O.C. is a fab American soap-drama which will easily fill the void in the lives of those who followed shows like Dawson's Creek. It has all the glossy characters you would expect from Dallas only here they have heart and soul and plenty of depth to make them much easier to relate to. The release has an excellent visual presentation and a solid audio track, with some nice extras to round it off. If you've never watched the O.C. you really should go back to the first season and start from the beginning but both seasons are no-brainer purchases. Believe me, once you get started on this show, there's no stopping.