The Night of the Grizzly Blu-ray Review 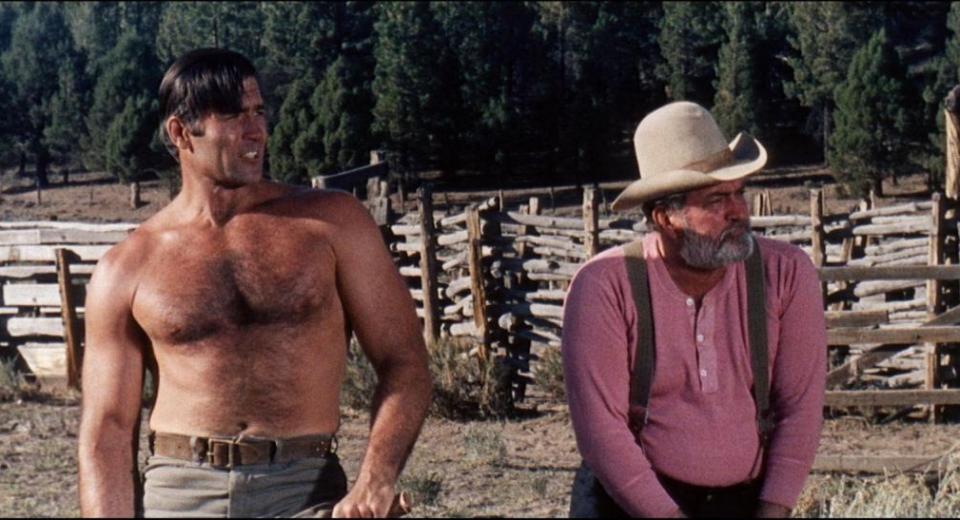 Well, lookee here, there’s grain aplenty in this here AVC transfer!The 2.35:1 image is rife with the stuff. The picture looks grittier and grainier than a dust-storm and all the better for it. Oodles of texture give the picture an authentic film-like quality.

Some shots of the blue skies poised above the distant mountains can appear slightly clumpy though, with fluctuating clouds of grain bubbling away, but I would hesitate to say that this was a side-effect of the digital transfer and not part of the original source element. It shouldn’t prove distracting, either way.

Some print damage lurks about the frame from the time to time. Mostly, it is just pops and little flecks, the usual stuff of vintage. But there are a couple of instances when some flashing discoloration occurs over at the edge for a second. This is nothing much to worry about though, and, for the most part, this print offers a strong and reliable image.

And it is quite detailed too. Naturally the elements are not pin-sharp, and the picture doesn’t have much three-dimensionality to it, with the photography pretty flat even considering the extensive location lensing, but there is a lot to admire where it counts. Definition is nicely resolved and close-ups and middle-ground shots have a lot of integrity and finite information to study. There is texture to the weather-beaten faces, a glow to the eyes and some follicle separation and keen whiskerage, which always makes for an arresting image. A lot of smaller elements are scrubbed-up with flair too. The nails in Hank’s boots, the weave in shirts and coats, the wood-grain in the ranch timbers and the dents in the stock of Big Jim’s rifle. We can clearly see the holes in a pair of boots put there by the steel teeth of a trap, and the creases in worn leather. Bric-a-brac in the bank and in Wilhelmina’s general store is also proudly presented with words on calendars and signs and books nicely etched. Wounds in animal hides and the blood splashed across various human victims also have clarity.

Colours are generally satisfactory. The palette is typically earthy, but the primaries are still allowed to shine. Blood, clothing, signposts and that alarming green hue that poor Meg goes when she takes a slug of illicit whiskey all have a smart degree of vividness. Skin-tones are very tanned and leathery, with Ron Ely, especially, looking the swarthiest and the most sun-kissed.

Contrast is generally good for the most part, but the print has whites that have a tendency to bloom. We can see this in highlights on faces that burn out in the brighter daytime scenes, and upon sheets hanging on the line. In a couple of instances these can be seen giving off a shimmering white halo – not exactly glaring, but certainly apparent if you go looking for it. So … my advice is not to go looking for it. Black levels, however, are more than satisfactory and are able to bring some good shadow-play and atmospherics to the exciting nocturnal attack sequences. But I will also have to say that there could be some crushing going on during the first bear-attack and Big Jim’s subsequent wagon-ride to town with his injured dog. The blacks here, and later on when Angie and Jim argue about what to do, seem to smother quite a bit of detail. But this may still be down to the source, and I am never all that bothered by black levels being too intense, anyway. The final battle is full of shadow, but nothing appears to be swallowed-up by them.

I did notice a smattering of aliasing going on, but the transfer has no banding, DNR or edge-enhancement to spoil the view. Overall, this does well for detail and texture, but may irk some viewers for its stygian blacks.

The Night of the Grizzly gets a DTS-HD MA 1.0 mono track that must surely present the original audio with as much accuracy and faithfulness as we can probably get.

Dialogue is good and strong. No words are ever lost or submerged in the action, and there is even a little bit of positioning within the mix when it comes to people shouting across the wide open spaces, or singing in unison atop a trundling wagon in the middle-distance. The voices from Clint Walker and from Leo Gordon are always wonderful to listen to, both strong but mellifluous. The score from Leith Stevens receives some clarity and presence, never too thick, nor too shallow, but a touch brittle here and there.

The shattering of the whiskey bottle on the rocks is keen and vivid and possesses a solidity that is quite reassuring. Likewise the two-fisted mayhem during the sporadic brawls. There’s a tendency to use the same fist-on-bone sound effect, but its still reassuringly dealt out. Big Jim delivers a couple of sledgehammer blows that satisfy with their meaty thwacks! And one backhanded swipe that sends Ron Ely sprawling over a wagon has a good emphatic thunderclap to it. Oh, and listen out for the glorious echoing TOKK!!! sound of a snapped pool-cue brought down upon a noggin. It’s all done for comical effect, but it’s still great to hear.

The roaring of the bear bites into the mix but definitely sounds muted by its unavoidable limitations. Gunshots don’t really resonate with much depth although they do have a nice “crunch” to them, especially when the Winchesters belch out and we get some whining ricochets off boulders … but the sound of traps being sprung – steel jaws, box-doors thudding shut etc – have some firm degree of impact. There’s a little bit of detail involved in some of the action – such as the metallic clout of a man-trap being wielded as a weapon and getting bashing against a rock, or the cascading of shelves of jars and bottles during a melee. Bass levels aren’t spectacular, of course, but there are times when the action gets a good solid foundation. The bear hammering on the stable walls and then crashing through them has some depth and vigour, for example.

All in all, you can’t really go wrong with this. It’s an old sound design, but it still delivers enough to satisfy. Another 6 out of 10. Remarkably, Olive Films have added something to this release, and we can savour a great little interview with the mighty Clint Walker in the 27-minute retrospective with the actor entitled The Legend of Big Jim Cole.

Now an old man, Walker recalls the bear-battling ex-sheriff as being the favourite character he has played. He discusses the story of the film, the shooting of it and his experiences working with the other cast members. He even talks about his time as a law enforcer in what has been a very rich and varied life.

I hope that Olive Films can find more material for future releases. Great entertainment from start to finish, this is ripe old school action in the form of a rugged outdoors yarn. Joseph Pevney arms the mighty Clint Walker and sets him on the trail of the meanest grizzly bear to come down from the mountain. But before he even gets that far, the honourable man-of-the-West must contend with pesky varmints from the town. He may just hanker after the quiet life … but it seems he’s going to have to fight for it first.

Olive Film release another winner-in-the-raw with this unrestored but cheerfully detailed hi-def transfer. The film’s vintage is there for all to see, but it looks appreciably cinematic and faithful to its source. It’s also great to find that the label has been able to provide something extra for the release, too. An interview with the aged, but still awesome Clint Walker seals the deal for me, and it is great to hear him wax lyrical over the role he recalls most fondly of all.

Double-billed with William Girdler’s seventies variant, Grizzly, Pevney’s atmospheric and exciting saga holds its own with style, wit and panache. Walker is terrific, but he is backed by a cadre of superb character-actors as well, who fill out the screen with rich exuberance. The comedy works. The familial drama works. The brawling argy-bargy works. And when the grim stuff starts, it hits hard because we’ve come to love the characters.

The Night of the Grizzly is wonderful stuff, and it comes highly recommended.