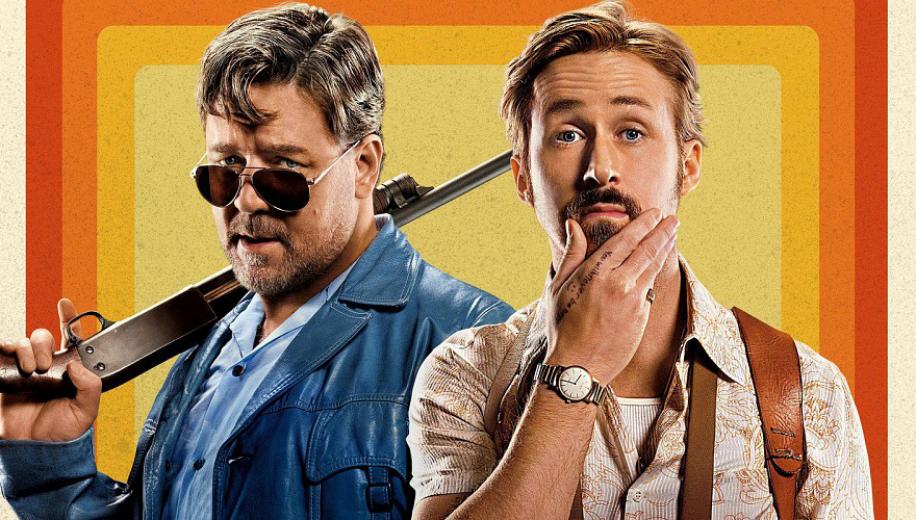 Like many great detective buddy movies, you’re sure to be onto a winner when there are two opposites leading the way. The Nice Guys is no different. A car crash resulting in the death of adult movie star, Misty Mountains (Murielle Telio) sets in motion a string of events involving two slightly questionable private detectives. In the days following the death of her niece, Mrs Glenn (Lois Smith) is convinced she’s seen Misty alive and well and so enlists the help of Holland March (Ryan Gosling) a private eye who’s more than happy to accept a hefty sum despite his own certainty of Misty’s death. Meanwhile somewhere else in LA, Jackson Healy (Russell Crowe) is busy being hired by Amelia Kuttner (Margaret Qualley) to help get two men to stop following her. Healy, the guy you hire when you want someone taught a lesson.
Healy, the guy you hire when you want someone taught a lesson, gets to work on Amelia’s case and its round about this point where our two stars first cross paths. After a somewhat unpleasant introduction resulting in the breaking of Holland’s arm, Healy later resorts to asking March for help with his case as it transpires both his and Holland’s cases are intrinsically linked. March is the widowed father to Holly (Angourie Rice), his thirteen year old daughter, who doesn’t seem at all phased by her fathers line of work and who eventually finds herself as the third wheel within the unlikely duo of March and Healy. As the plot thickens Healy and March find themselves caught up in a bizarre mystery surrounding a skin flick and air pollution whilst a hit man called John Boy (Matt Bomer) is out for their blood. Being a huge fan of Kiss Kiss Bang Bang I had pretty high expectations for the latest film from writer and director Shane Black. However, perhaps it was just me, but The Nice Guys just didn’t seem to fully hit the mark. The film itself was amazing to watch, with great attention to detail paid to the costuming and decor, which combined with the sound track, managed to deliver an excellent period feel. Little nods to 1970s nostalgia are dotted throughout the film from the cars and the advertisements on the billboards to the brands of drink and their packaging.

Stylistically the film is well shot, nothing overtly fancy or exceptional but it does make use of all the props and cast to really instil the idea of it being set in the 1970s. Black wrote The Nice Guys along with Anthony Bagarozzi and while there are a couple of really funny moments within the film, the majority of it just appeared as mildly amusing. The script at times comes across as strained and almost as if it were trying too hard to be funny and just didn’t seem natural. With more of a backstory to March’s character it made the brief insight into Healy’s past barely register and therefore didn’t really give much depth to his character. Granted this didn’t hinder the emotional investment in the characters but I think it would have fleshed Healy’s character a bit more.


I wasn’t sure how Gosling would come across in a comedy role, he meanders between slapstick and silly in this film and granted, some of it is funny. Gosling adds subtle details to his role as March and quite successfully portrays a somewhat inept and sheepish detective. Really contributing to Gosling’s performance is Rice, playing his smart and sassy daughter who manages to insert a mature and moral element into the film. Crowe harbours more of a deadpan style in his role as Healy, letting his facial expression do much of the work, as Healy establishes himself as the brawn and the muscle within his partnership with March.

Crowe’s attempt at comedy didn’t seem half as convincing as Gosling's but together they work well and between them deliver a couple of funny scenes. Kim Bassinger pops up as Amelia’s mother in a brief role but one that appears to lack any emotion. With punches being thrown left, right and centre, several plummets from tall buildings, a probe into the porn industry and some climate awareness, The Nice Guys seems to have all the makings of a laugh-out-loud hit, but for me, it fell short somewhere along the way. It’s a fun and easy watch but don’t expect to find yourself in stitches of laughter.