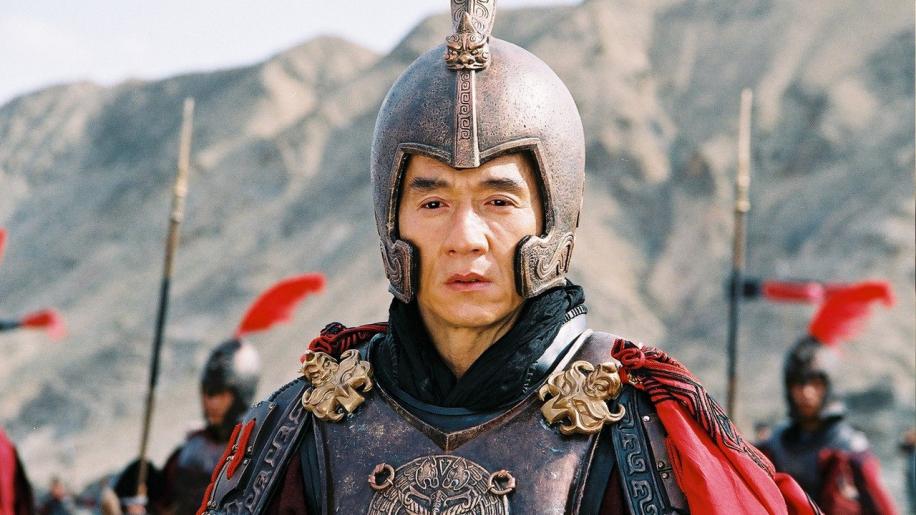 The disc has been given a theatrically correct 2.35:1 anamorphically enhanced for widescreen TVs with an average bitrate of 8.29 Mbps. Wow. I will wager that this is the best looking Asian film thus far release. In fact I'll go so far as to say its one of the best looking transfers I've seen. First of all the print is absolutely pristine, not a blemish anywhere and what's more is not a hint of film grain, anywhere, it is stunning in its clarity. Add to that a detail level seldom seen outside of high definition and you have a picture as clear and as bright as day. Wing-Hung Wong's stunning cinematography is given the full treatment, his reds and blues of the caravan shine off the screen against the sandy background colour of the mountains, sweeping camera movements capture all the photography in all its splendour never any wash or bleed. Flesh tones are spot on and skin detail is immaculate. Brightness and contrast are set to give full rich deep blacks pulling depth to the screen. Digitally there was not a hint of compression artifacting neither was there any edge enhancement; an astonishingly good transfer.

However, it can't all be good, the progressive scan with the NSTC transfer did give a rather jerky movement to the landscape sweeps (prepared to accept this might be my player) and the quality of the authoring has highlighted some of the poorer visual effects. Green screen backgrounds do tend a bit toward the grey and there is a poor transition between film and CG; this however is a problem with the original print, not the processing.

The film has been given two Cantonese 5.1 tracks, Dolby digital and DTS. The first thing that strikes about the DTS track is how loud it is, far louder than the Dolby. Next thing that strikes is the separation, it is extremely widely separated, normally this is good news but in this case the overall mix didn't hold the separation together. Ok, that is a bit of an oxymoron, what I mean is each speaker had its own definition and was clearly audible, particularly for the centre speaker, separately in the mix giving an 'angular experience'. Compare this to the Dolby where the mix is at a far closer nit, wide separation but the mix is held tight together giving a 'rounded experience'. Which you prefer will depend on your listening style, personally I felt the wider separation of the DTS opened up the sound stage further than my amp has ever performed before, I loved it. However if you prefer a tighter mix then the Dolby is for you. Tonally both kept a decent range, the DTS wins out on the bass levels, the Dolby has a slightly more pronounced mid section. What both can agree on the surround effects. Neither disappoint there, be it dialogue direction, the thunder of the horses, the clang of sword on shield all the speakers get in on the action to fill the room and place you in the centre of the battle field(s). The score too is faithfully reproduced, an all encompassing surge of music, enough to keep the neighbours awake. Both tracks are very dynamic and equally as engaging as each other, however, I felt that neither stood out as reference.

The set under review here is the limited edition collectors box set, limited to 5000 copies world wide, this one is 3507. In the set there are four book marks, a certificate of authenticity, a cardboard stand, a four inch terracotta sculpture of a Qin Dynasty figure hidden inside a block of earth to be excavated by you and all contained within a plush box set. There are three discs to the set, and all have extras.

Disc one is host to an audio commentary featuring director Stanley Tong, producer Barbie Tung and art designer Oliver Wong. This can be selected as audio and it is also subtitled. There is hardly a moment to pause for breath; so much information is given about all aspects of the fil, from their respective areas. Tong is frank and informative about his product, much time is spent on any subject he cares to discuss and there is much, be it locations, sets, casting, script changes, shot designs or historical facts. A hugely informative talk that keeps on going well into the credits explaining the outtakes used!

Not quite an extra but the main menu has a 'highlight' section, that plays all the fights in the film as one section, removing all that unnecessary plot, great for fight hounds.

Disc two has the majority of the extras and very kindly has an option to view all with subtitles. First up there is the Making of featurette, unlike its Hollywood counterparts the Asian making of is a just that, not a thinly veiled excuse for promotion. There is plenty of behind the scenes camcorder recording along side explanations and interviews with most cast and crew. It is very interesting in a, even if some of the material is repeated below.

Next up is Behind the scenes part one. There are nine scenes to choose from and all detail setting up and shooting the film, all filmed with camcorder; hugely interesting, if a bit repetitive. One thing that annoyed is that there is no play all function, each part is between a few seconds to ten minutes long and to keep having to select the next bit became a bit of a bore.

Next up there are two deleted scenes, unfathomably these play consecutively and cannot be played separately, one last for a few seconds, the other about three minutes and follows Williams and Jack's entrance to the floating tomb, not much here.

There are two versions of the main theme song as music videos, one in Cantonese, the other in Mandarin, plenty of film clips for both; I actually quite like the tune, preferring the Cantonese one, played in Dolby digital 2.0 stereo.

Next up is the Hong Kong premier, again all shot on camcorder this seventeen minute piece has plenty to say. Starting off with footage of the crowds and their reactions to the stars it then focuses on the main talent that answer question on stage. As part of the fun the cast and crew opened a 'floating rock' that revealed a hidden scroll, itself telling the startling fact that there was thirty six million feet of film to create The Myth, with the copies going to all the major Asian countries and three thousand in China alone the film is quite a record breaker!

Finally for this disc there is the trailers section, there are theatrical trailers, TV and radio spots to choose from.

Disc Three plays host to three sections, first up is Behind the Scenes part two. This plays pretty much like part one but with different scenes obviously. There are only five but they play for considerably longer with only one at a few seconds, the majority to ten minutes.

Next biggest feature for the set is the cast and crew interview section. Pick from Stanely Tong, Jacky Chan, Kim Hee Seon, Tony Leung, Mallika Sherawat, Sun Zhou and Choi Min-Soo to see a brief resume and character description before clicking onto the interview proper. Each participant has between five to twenty minutes in which they answer questions from an unseen interviewer, Jacky and Stanley get the most screen time while Min-Soo has the least, but then his part was essentially a cameo. Many of the basic topics are covered including casting, character development and filming. Perhaps too much to view in one sitting, but nevertheless hugely rewarding.

Finally there is another chance to see the final credits roll along with the outtakes, this time with DTS at 1536Kbps!

I must admit to liking this film, despite its obvious flaws. It may not be Chan at his best, but there is something there. There is no denying the spectacle of the film, every inch an epic, well except the modern bits. There is eye candy galore be it the sweeping landscapes the exotic colours or Hee-seon Kim and Mallika Sherawat. Ignore the plot holes, there is enough to enjoy. As a DVD package this is quite clearly the best one could hope for. Ignoring all the collectors' edition stuff, if you can, the DVD's are glorious in there transfer and packed to the gills with extras to keep you going for weeks. With Christmas coming up, put this one on your list.