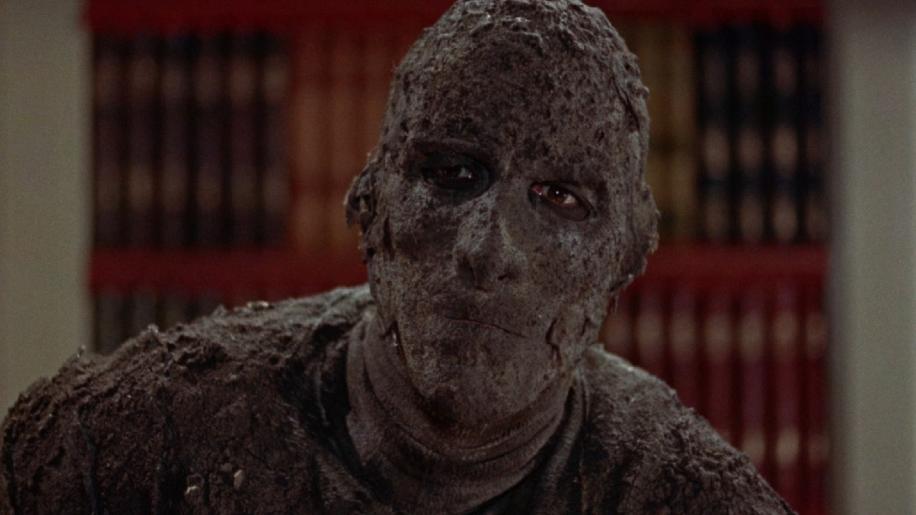 Despite the vintage of the film, The Mummy looks pretty good, indeed. The anamorphic 1.85:1 image does the ravishing set-designs justice and the effective, and alarmingly direct, camerawork comes across well with a transfer that retains all of its atmosphere and detail. Colour is well rendered - the stark beauty of Mehemet's statue of Karnak, the bright red of his fez, the earthy tones of the good old English bog and the finely decorated parlour in Banning's house all scrubbed up with honours. Detail is good, too. Look at the mouldy bandages in all the close-ups of Kharis, and especially at Christopher Lee's penetrating eyes blazing from within. Remarkably warm, the picture is blessedly free from grain or print damage. However, there are a couple of occasions when blue dots flash upon the image for the most fleeting of instances.

But one gripe that is not so slight is the softening of the image over the right side of the screen, particularly noticeable down in the corner during a few of the early sequences. Look at the accoutrements on the doctor's desk at the asylum, for instance. Blacks, however, are strong and deep enough to convey oodles of atmosphere and a nice balance to the vivid colour schemes on display. Overall, this is a very decent transfer of The Mummy, the odd niggle here and there not nearly enough to mar the pleasure or enjoyment of the movie. Although only the original mono track, the audio for The Mummy has been cleaned up a treat, sounding very clear and crisp. Voices have a natural quality that comes across well with the transfer, although there are a couple of instances of very slight drop-out, usually affecting Peter Cushing's lines. The score is suitably textured and never drowns out the dialogue, sounding robust and warm throughout. The many gunshots carry a nice bit of weight to them and the plentiful impacts and crash, bang, wallops of the mummy's smash 'n' grab antics are effectively delivered with gusto. All we get with The Mummy is the original theatrical trailer. Running for a lengthy 2.18 mins, this gives away far too much. Honestly, for those suffering from a short attention span, this is the ideal way to view the film - as it covers every key scene and incident in the correct running order as they occur in the movie.

As with too many Hammer films on DVD, this is a pretty poor show. The Mummy is fast-paced, colourful period horror from the stable that could do this sort of thing in its sleep. A lean narrative that only suffers from a couple of jarring flashbacks sees that The Mummy is not only cheerfully - and chillfully - episodic and entertaining, but that it delivers some clever and witty dialogue, too. Hammer would fall into the same trap as their forbears, Universal, and produce lacklustre sequels one after another, masking the vibrant quality of each individual horror franchise (Frankenstein and Dracula as well as The Mummy - although the Quatermass films actually got better as they went along), but for now, at least, you can enjoy the crusty, cloth-wrapped three-thousand-year-old malevolence of one of Christopher Lee's most powerful, and potent, screen monsters. Recommended.