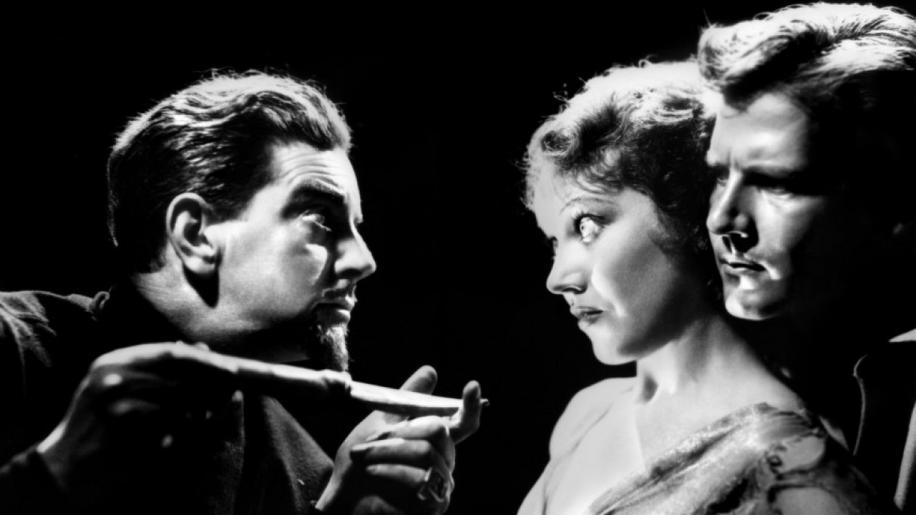 Criterion released a version of The Most Dangerous Game quite a while ago and, if I am honest, that one is superior to this. It retains more grain, detail and texture, although there is also a fair bit more damage on show.

But, although I own that edition, I would still recommend this newer restoration for fans because the colourised transfer from Legend is certainly a worthwhile curio. Thankfully, this release contains both the colourised and the restored black and white versions.

Retaining the original 1.33:1 aspect, the print now exhibits much less wear and tear and none of the frame-blips and perforations that the Criterion still reveals. But the image is noticeably smoother and less defined than the earlier transfer. The film has always had a soft, occasionally hazy appearance - the product of the print's vintage - but it seems that even more noise removal has taken place now. Grain is washed and edges have a touch less distinction. Background detail is marginally less precise, although there is still substantial depth and deep-focus immersion for a film from 1932. Close-ups don't have that keen clarity that many of the film's stills I have extol - something that the Criterion edition actually doesn't fare too badly with. Though the scar on Zaroff's head and those that criss-cross the face of his servant played by Dutch Hendrian and known, predictably enough, as “Scar-Face”, have quite some detail revealed. But there are also much less frame jumps and wobbles now, the film looking more robust and steady throughout and considerably more assured of itself.

Now, the colourisation that the film has undergone from Legend has, like their interesting work on She, Things To Come, 20 Million Miles To Earth, It Came From Beneath The Sea and Earth Vs The Flying Saucers, apparently been supervised by Ray Harryhausen. But sadly, this disc doesn't carry any featurettes regarding the process or the actual restoration of the film at all, which is quite annoying. But, as I said in the main review, I quite like this new appearance. Colours are warm and dry, never overt or aggressively plastered-on. There is no smearing, blockiness or over-saturation and attention has been paid to variations in hue and shade across the board. We now see that Zaroff actually has red hair, as Banks himself, did. We also discover that Noble Johnson, who was black in actuality, has been glistened with a pallor from the Russian Steppes for his part as the hulking Ivan. Greens and yellows, browns and reds predominate, the film hardly exhibiting a natural-looking palette but still coming across as essentially fantastical, which suits me quite nicely.

Blacks aren't the best around in any version of the film that you choose to look at, but there are some fairly effective shadows in the jungle and in the Count's castle to add to the redolent atmsophere. These are better defined and more consistent in the B&W transfer, though, and somewhat muted in the colourised.

Legend are not the ones who carried out the colourisation process of my favourite vintage genre title of them all, Howard Hawks' The Thing From Another World, which is also pretty accurate to colour stills that I've seen from the actual production - although curiously, their colour edition of the movie actually runs several minutes shorter than the original version, omitting some material for no apparent reason. Thankfully, Legend keep their films intact, so you can rest assured that The Most Dangerous Game, in colour, is uncut. There really isn't any difference between the audio mix on this release and the previous one from Criterion.

Presented with DD 2-channel mono, the original audio is pretty much how you would expect it to sound. The film is now over seventy-five years old, so the mix is appreciably dated and lacking in subtlety, nuance and vigour. Whilst there should be no trouble hearing and understanding any of the dialogue, even Armstrong's drunken rambling, voices are understandably tinny, hollow and somewhat crackly. Mind you, there are some great screams from the various crewmen going overboard - something that Schoedsack and Cooper loved to incorporate into their movies - and getting savaged by sharks and whatnot, and, of course, we have the simply amazing tonsil-waggling of the best in the business - Fay Wray - who gets to screech and holler at various instances. Impacts and effects, such as the Count's hunting horn-call, have moderate presence, and the barking of the dogs, the crashing of the thick-tree trap and even the fierce thwippp! of the arrow whanging past Wray's head may not have the strength of a modern mix, but they still sound pretty good to me.

Perhaps the single most powerful aspect of the sound design, anyway, is Steiner's thunderous score, which certainly does have some aggressive tendencies. I've compared the presentation of the score here to the thrilling re-recording of the full score on CD from William T. Stromberg (the undisputed master of Max Steiner and Bernard Herrmann score reconstructions) and I have to say that I was actually quite impressed by how well it stood up. There may not be the same power and clarity, but a lot of the instrumentation and the wild orchestration still comes shining through - which is very pleasing indeed.

There are the expected pops and cracks that go with the territory, but I doubt that we will hear this sound any better until another full restoration and new audio mix, perhaps in PCM lossless for an eventual BD release, take place.

With concessions made for the age of the source material, there is actually little to complain about here, but a 6 out of 10 is the best that this can hope for. Despite having what I think is a terrifically atmospheric animated menu screen depicting Zaroff's grim castle, Legend's disc is a disappointment in the extras department. Having said this, though, the film has never been bestowed with much bonus material throughout its various releases. However, what is sorely missed from the Criterion edition is the wonderful commentary from film historian Bruce Eder, which would have set this release off quite nicely.

What we do get, though, has one major theme running throughout it - and that is Max Steiner's awesome score. Now, being a a film-score fan and a devout lover of Steiner's work, this should have pleased me, at least. But there really isn't much to be learned from the three interview segments that we are treated to.

The first and, by far, the least of them is with the otherwise great Ray Harryhausen, who merely runs through a few rather obvious facts about the composer and the power of film-music and then simply gives his opinion on the quality and influence of Max Steiner. Since Harryhausen was allegedly instrumental in the the colour design of this new edition and one of the key players in getting Legend's restoration work out into the world, it is truly puzzling that he is not quizzed on the extensive process that the film has undergone. Instead, he merely recounts some very familiar views on the score and the composer that I am convinced (although I haven't actually checked yet) have appeared on other discs before this one.

The next series of edited-together interviews is with James D'Arc, Curator for the Merian C. Cooper Papers and writer/researcher of vintage genre movies. Although knowledgeable and engaging, this featurette swiftly moves off the topic of the lauded filmmakers and the movie, itself, and charts a familiar path regarding the skills of Max Steiner. Interesting, once again, but we do need something more substantial as far as the making of the film is concerned.

Then comes the third, and final, series of talking-head splicings - and this one is certainly the best of the trio. Composer and orchestrator John Morgan is Discussing Max Steiner for us and he, more than anybody else, is the main man when it comes to Steiner's gong-nabbing scores. Having worked closely with friend and associate William T. Stromberg, along with producer Anna Bonn, to restore, reconstruct and re-record many classic scores from the Golden Age, including Herrmann, Korngold, Waxman, Newman and Freidhofer as well as Steiner, his opinions and knowledge on the matter are absolute gospel. Morgan, Stromberg and Bonn actually have their own label, Tribute Film Classics, and I have reviewed several of their outstanding releases for the site already, and even if I positively adore hearing from the man, this featurette, along with the previous two, is still no substitute for a proper retrospective making-of. Many modern directors - Peter Jackson included - cite this movie as a real influence upon them and it is a shame that some of them couldn't have been brought together to record something about it. Mind you, if Criterion are planning a BD release of the The Most Dangerous Game at some point, I suppose I'd be willing to yack over the top of it in a commentary track ... hint, hint!

The disc is rounded-off with a couple of trailers for Legend's restored and colourised versions of William Cameron Menzies' imaginative The Shape Of Things To Come (1936) and Irving Pichel's (along with Lansing Holden) disappointing She (1935). The Most Dangerous Game is wonderful entertainment - dark, thrilling, controversial - and cinematically important as well, as the progenitor/genesis of King Kong. Cooper and Schoedsack made movies that were way, way ahead of their times, yet were still hugely indicative of the mores and attitudes that prevailed around them. Whilst Kong is unmistakably the genre milestone that will forever cement their names, Dangerous Game represents them at their most streamlined, inventive, economical and downright ruthless. Wray, McCrea, Armstrong and especially Banks are excellent and leaps and bounds ahead of many of their contemporaries in similar chiller/thrillers. Their commitment to going the extra mile - and nobody could ever accuse Fay Wray of slouching in a performance, anyway - is a joy to behold. Schoedsack was the James Cameron of his day, muscling-in technical innovation, high-concept plots and bravura action into out-and-out commercial crowd-pleasers. His vigour, coupled with Cooper's bold savvy, meant that, together, they were the foundation stone of the modern blocbuster.

The Most Dangerous Game is a small film compared to what the duo were accomplishing on the next studio stage, but no less groundbreaking.

Whatever your opinions about the colourising of vintage movies - and I'm still sitting on the fence as I actually love the results of some of them, despite considering myself something of a purist (!) - this is a respectful job that looks accurate and decidedly un-cartoonic. The restoration has pleasingly removed most of the excessive damage to the original print, which had already struck new postives from some negatives that still remained (namely, the shark attack sequence), but I will say that some of the texture may have also been scrubbed. Nothing too detrimental, I hasten to add, but something that means true fans of the film should still keep hold of their Criterion edition - which also has that fascinating commentary from Bruce Eder. Extras-wise, this release isn't much to write home about, which I still find irritating for something as barnstorming and influential as The Most Dangerous Game.

Incredibly visceral stuff from the Kong boys and a film that straddles the horror-thriller divide with brazen and pulverising enthusiasm. Highly recommended.