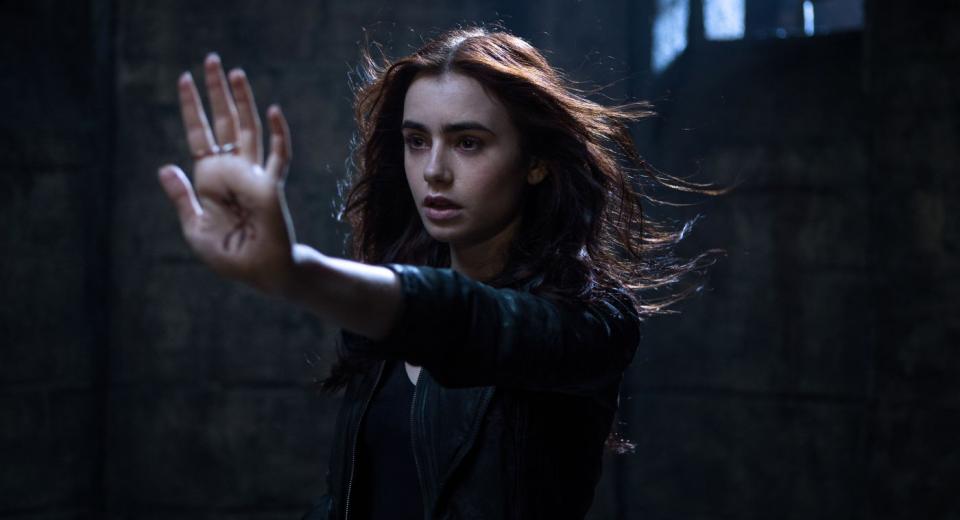 Imagine that you had a script writing program and you entered in all the key elements of Twilight, added a hefty dose of Harry Potter and even a dash of Star Wars, then you hit F4. The Mortal Instruments is basically what would come out of the other end, a cookie-cutter film aimed squarely at the surprisingly lucrative ‘tween’ market. Whilst the film is based on a series of young adult fantasy novels by Cassandra Clare, there’s no doubting the producers’ intentions when it came to the adaptation. And since the first novel was only published in 2007, you can probably lay similar accusations at the writer.

For those that are over the age of sixteen, The Mortal Instruments: City of Bones centres on Clary, played by Lily Collins, a seemingly ordinary teenager who discovers she is the descendant of a line of 'shadowhunters', a secret cadre of young half-angel warriors locked in an ancient battle to protect our world from demons. After the disappearance of her mother (Lena Headey), Clary must join forces with a group of 'shadowhunters', who introduce her to a dangerous alternate New York called Downworld, filled with various deadly creatures.
In order to keep to the template, you get the classic love triangle between Clary, Jace (Jamie Campbell Bower) and Simon (Robert Sheehan), just like Twilight, not to mention vampires and werewolves. There are also witches, warlocks and a hefty dollop of magic, whilst the idea of another world existing alongside ours is very reminiscent of Harry Potter. They even call normal people ‘mundanes’ which immediately makes you think of Potter’s ‘muggles’. There’s also some “I am your” and “She is your sister” revelations that would make even George Lucas blush, not to mention confuse the love triangle somewhat.

The staggeringly derivative nature of the plot wouldn’t be so bad if it wasn’t for the fact that the writers - of the film at least since we haven’t read the books - have absolutely no idea how fantasy works. In any fantasy film you need to establish a series of ground rules of what people can and can’t do and then stick to them. In The Mortal Instruments, whenever Clary finds herself in a corner, she suddenly develops new powers that get her out of it. In fact the entire cast seem to reveal various magical powers in almost every scene, with no real logic to most of them. Every film, even a fantasy, needs to have some form of internal logic. For example the titular Mortal Instruments themselves aren’t really explained and despite being used as the film’s subtitle, the City of Bones only appears in one scene and isn’t really a city, more of a basement. The overriding logic appears to be “does this look cool?” rather than “does this make sense?”
The lazy plotting also means that the writers rely on ‘deus ex machina’ on more than one occasion to get their heroes out of trouble and in fact that seems to be the only purpose for the character of Luke, played by Aidan Turner. The film spends a lot of its already excessive 130 minute running time explaining its world, so much in fact that at least half the film seems like pure exposition. They also introduce various plot devices in such a heavy handed way that you just know they’ll play an important part later. When a character points out a replica of the Mortal Cup that everyone is looking for, you can bet your pension that will come in useful later. The same goes for the convenient portal that can take you anywhere in the world, which is not only under used but again is obviously going to be important before the end.

The film’s young cast try their best with the material they have to work with but you can only spend so much of your time dressed as a teenage goth’s wet dream before you start to feel silly. As the heroine Lily Collins, daughter of Phil no less although she must be relieved to have inherited her mother’s looks, makes for an attractive lead and Jamie Campbell Bower puts his cheek bones to good use. There’s Robert Sheehan’s best friend Simon, who is clearly in love with Clary from the first frame and Kevin Zegers as Alec, who is in love with Jace. This not only adds a bit of edgy homosexuality to the proceedings but also makes it a love quadrangle, just to really complicate matters. The final member of our gang of ‘shadowhunters’ is Jemima West’s Isabelle, who is the obligatory tough girl.

There is a decent supporting cast, with Lena Headey’s Jocelyn appearing all too briefly, whilst Jonathan Rhys Meyer’s gives it his best Henry the Eighth as the film’s main villain. Kevin Durant pops up as a heavy, CCH Pounder plays a witch whilst Jared Harris is the mysterious Hodge. As already mentioned, Aidan Turner plays a werewolf, which at least makes a change from being a vampire in Being Human. The film was shot in Toronto, standing in for New York, and that explains why almost the entire cast is made up of Canadian, British and Irish actors. However what is never made clear is why, despite being set in New York, only Clary and Simon have American accents, everyone else speaks with an English accent, although this anomaly is never commented on.

The Mortal Instruments is a reasonably well made movie, the effects are suitably big budget and whilst somewhat derivative of numerous other films, at least it looks interesting. The action scenes are also well handled and the film certainly isn’t afraid to push the envelope on its 12A rating but it definitely could have been edited down to a tighter running time. The director is Harald Zwart who previously helmed other teenager orientated movies such as The Karate Kid remake and Agent Cody Banks, whilst the novel was adapted by first-timer Jessica Postigo.